Add major milestones or notes about the Chicago below:

18 Nov 2014: Many suburban parks, bike paths, and golf courses have now been mapped, but one of the most prominent deficiencies are buildings in suburbs.

Chicago has an aggressive building demolition program to remove blight, dangerous structures, and places where people hide or conduct illicit activity. These buildings need to be removed from the building footprints (just delete them when you can verify their demolition), but they must be replaced with an address object (addr:number, addr:street, etc.) to help people searching for an address. You can track likely candidates for demolition but you must verify they were demolished.

22 Mar 2013: The Chicago buildings import is finished! Building footprints & addresses taken from free City of Chicago government data have been added to the map. Most buildings in the city are shown now, even houses and garages. The data is a few years old, so a few demolished buildings need to be removed and new ones need to be drawn.

One of our goals now is to fill in missing details around the buildings so that the city will soon look "complete". (Nothing is ever truly complete on OSM!) The first step is normally to align all the streets correctly, and then draw in missing alleys. Then features like parking lots, schools, places of worship, parks, sports pitches, pathways, and landuses. In some areas this work is proceeding systematically, and progress should be visible every 2 or 3 days at least.

Efforts are currently underway to draw in detail all train stations, major shopping centers, high schools, and forest preserves in greater Chicagoland, plus many parks and golf courses.

The Chicago area is setting a high bar for mapping quality. Everyone is welcome, but bad tagging will be reverted quickly, and sloppy drawing is likely to get re-done. Please map at a high resolution, and look at other examples (also in edit mode) to see how something should be done.

When you expand a node (e.g. an imported park) into a way, be sure to keep all the original tags. The easiest way to do this in iD is to draw a new area covering the feature, select both the new way and the original node (click one, then hold down Shift and click the other), and then merge the two features (click the "+" icon in the popup toolbar, or press "C"). In Potlatch, select the node, hold the Shift key, then click outside the node: this forms a rectangle that you can easily sculpt into the proper shape.

Streets and administrative boundaries should usually be left free-standing, so that other ways do not share the same lines (although boundaries may follow coastlines). Landuses may border each other as well as features like parks, natural areas, & school outlines, but they should generally not border streets or buildings. Schools (amenity=school) should be drawn as outlines around the property, with buildings inside them. Churches and other places of worship (amenity=place_of_worship) should be tagged on the building footprint.

We should follow the standards set by Key:railway Until the trail has been built on or transformed into a bike trail, the parts of the trail left should still hold the railway=abandoned or railway=disused tag.

Landuses present a clear picture of the urban layout, while improving the map visually by putting streets into better relief. Currently several areas are well covered, including the near northern suburbs & the far north side of Chicago (north of Irving Park Road especially).

The best practice is to tile the edges of landuses against other landuse areas, as well as parks, schools, and rivers (so that the edges share the same way). Landuses should never intersect with, or share ways with, streets. They should be drawn carefully, but not so literally as to atomize them - they're intended to represent the general usage of an area (similar to zoning areas), and it's okay to spread them across minor roads, vacant lots, parking areas, etc. which belong to a particular usage zone (like a residential neighborhood). Normally gaps are left at major roads, with the fringe landuse being drawn to the curb line.

A landuse zone can be used to put a name on a development or a group of buildings, such as a large housing complex, a shopping center, or an office park. In this case, 2 similar landuses (e.g. 2 residential areas) may border each other.

While Chicago isn't known for its natural scenery, the area features an extensive network of forest preserves operated by the various counties. Many of them still exist only as nodes, and need to be drawn as outlines. Tags should be changed from "natural=wood" or "leisure=park" to either "landuse=forest" (if wooded) or "natural=grassland" (if treeless). Any further details can be drawn inside these areas, e.g. paths, service roads, parking areas, ponds, wetlands, picnic shelters, restrooms, rivers & streams.

Many forest preserves feature a mix of woods and grasslands. You can tag the dominant cover in the forest preserve outline (forest or grassland), and draw the subfeatures (e.g. patches of woods or prairie) within the outline. "Civilized" grassy areas where grass is sometimes mown (e.g. picnic areas) can be tagged "landuse=meadow" while wild grasslands that are never mown should be "natural=grassland".

Here is a finished forest preserve showing all the usual details.

Add your name below a Sub-heading 1 with the year to let users know when you were last active. 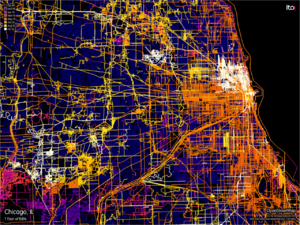