From OpenStreetMap Wiki
Jump to navigation Jump to search
Key:maxspeed:advisory - Other languages

The maxspeed:advisory=* tag is used to map a posted

advisory speed limit which is not legally binding, typically on a curve or motorway on/off ramp. A different legal speed limit may also exist on the same road and be tagged by maxspeed=*.

By default, values will be interpreted as kilometres per hour. If the speed limit should be specified in a different unit the unit can be added to the end of the value, separated by a space (see Examples).

In Germany a speed of no more than 130 km/h (81 mph) is recommended for autobahns and similar roads, whose lanes are separated by a median or which have at least two lanes per direction, provided there are no traffic signs posting a lower speed limit (Richtgeschwindkeit).[2] On some stretches of roads a lower advisory speed is posted with a rectangular sign with blue background [3]. Motorway links in Germany have an advisory speed of 60 km/h unless otherwise posted.

Advisory speed limits are marked with green outline around the number. This is usually in the form of "Twenty's Plenty" signs, usually found in narrow, steep, or twisty residential areas in circumstances which are not extreme enough to be a 20 mph zone. 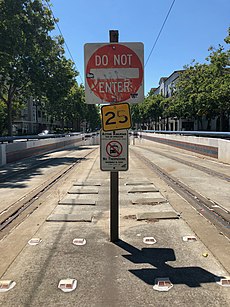 maxspeed=25 mph on the railway, not the parallel roadway.

Be advised that some railroads post speed restrictions using the same black-on-yellow sign as an advisory speed limit intended for the roadway.

maxspeed:advised=*
More details at taginfo
If you know places with this tag, verify if it could be tagged with another tag.
Automated edits are strongly discouraged unless you really know what you are doing!