This Nepal remote mapping guide describes mapping Nepal remotely with OpenStreetMap, including details about typical structures which can be found in Nepal and which will help you to map the region more precisely.


This document contains hints, tips and methods to map regions in Nepal with OpenStreetMap (OSM). The training material you here is based on practices developed by people who are both familiar with Nepal and experienced with OSM. However, there is always rooms for improvement, so, please, feel free to add your feedback.

This guide has basic and advanced information about how to map with OSM.

If you have not mapped with OSM before - no worries!
The best general introduction to mapping in OSM is the LearnOSM guide. It is strongly recommended that you go through the LearnOSM tutorials, if you are a beginner.
OSM uses multiple mapping tools however, the two most popular one's are iD (in browser editor) and JOSM (Java OpenStreetMap Editor). There are tutorials for both available at LearnOSM.


Mapping with the iD Editor
iD is recommended for those who are completely new to mapping. You can get up to speed with iD in less than an hour. For a tutorial, visit Using the iD Editor (LearnOSM)


JOSM is a Java-based application for editing OSM which you can run on your desktop.

It has many more features than other editors but takes longer to learn. If you are using JOSM for the first time to contribute to OpenStreetMap, then have a look at one of the various tutorials:

The satellite images used for remote mapping sometimes are blurry or dark. Sometimes clouds obscure the scene. Don't worry. Just do your best. Even if some things are missing, your work will be very valuable to the rescuers on the ground.
There are things you can look for in the imagery to help identify what you are seeing:
Shape - Most buildings are rectangular, which makes them easier to identify. But sometimes trees overhang buildings so they don't look perfectly square. As you look, try to see where a tree is covering part of a building, then draw the building as a rectangle. Also, while a river or stream will sort of wander, a canal may be more regular in shape.
Size - Wider roads, even if they are not paved (common in Nepal) can be major ways (primary or secondary roads). See the road classification below.
Patterns - Repetitive arrangements of objects (for example, row houses, temples, row of trees)
Shadows - These can be very useful. Sometimes a shadow shows that a blurry shape is, in fact, a one- or two-story building, or that it is not a building at all but, in fact, a tree. Check the shadows before deciding how to draw or tag a shape.


In the example below, the main road highlighted in red connects to a side road, but not directly, as you might expect. Looking closely you can see the shadow along the side of the main road, which shows that it is above the side road, which joins it further along the curve.
The photo shows other typical features. 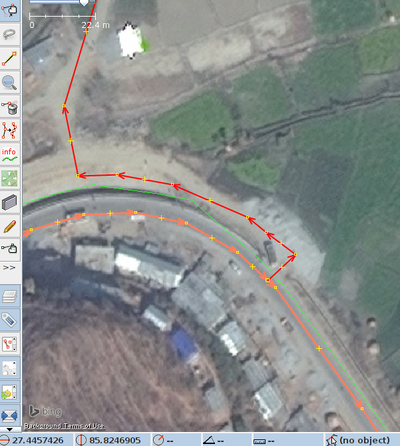 A curved road in Nepal

Roads
Outside of the major cities, few roads are paved. However, they may still be important roads, especially in the mountains.
For mapping this emergency in Nepal we are using a special system of tagging:

Offset Roads and Buildings
Some work was done before on Nepal, and you may notice that the locations of the roads or structures do not match the imagery exactly. If the offset or mismatch is consistent across the area you are mapping, Don't correct it! This offset can be corrected automatically when we make the data into maps. It's best to move on to another square and put a note in the Tasking Manager when you do. Someone will fix it.

Buildings
Nepal is quite hilly. Also, there often is a mix of large buildings, such as temples or apartments, and smaller buildings. From the air, they all look like they are the same height. As you can see from the pictures below, they can be quite different.
Sometimes looking at shadows can help you differentiate one building from another.
Also, buildings that are very tall can look like they are leaning to one side, because the satellite picture was taken at an angle. In this case it is important to map the base of the building, not the roof.
From the air it is nearly impossible to differentiate an apartment building from a big house or an office building. This why we tell mappers just to outline each building as an area and simply tag it "building." Just do your best to find the boundaries of each building. The more you map, the better you will get at seeing the edges of each building.

Buildings that are irregular in elevation, might appear as a set of houses 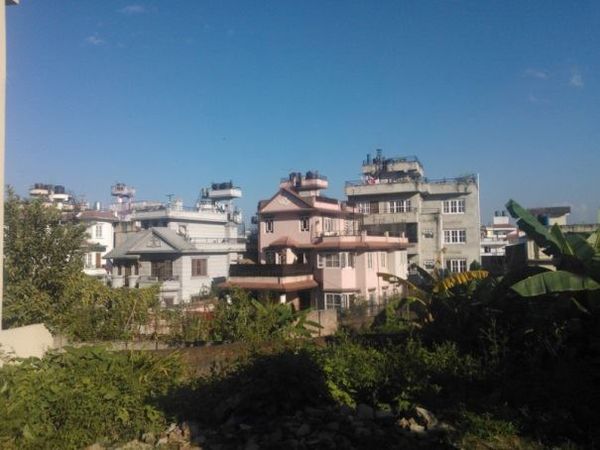 A row of houses may look like one big house 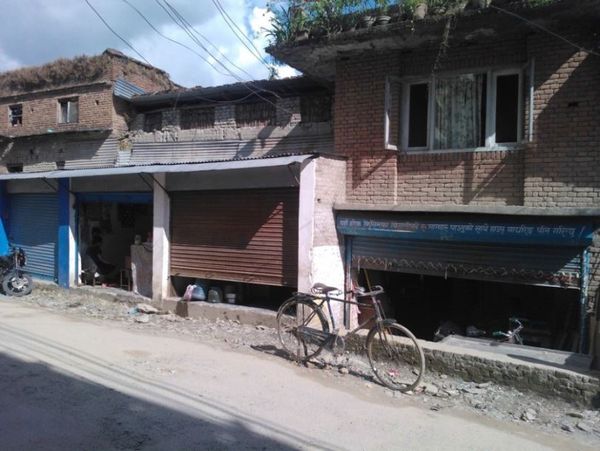 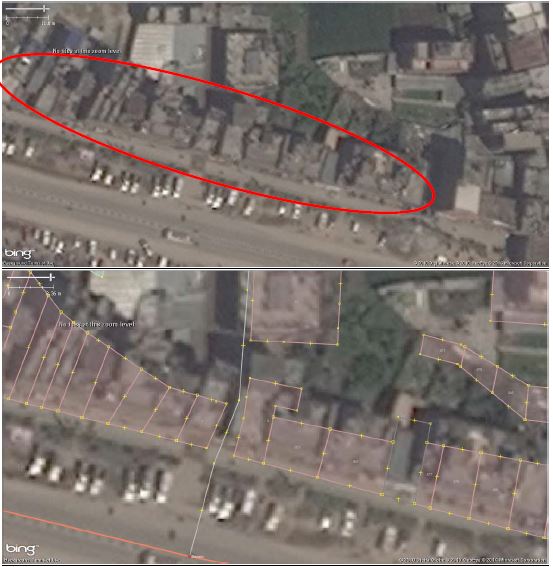 
To trace a building which has an open space in the middle, you need to create a "Multi-Polygon": 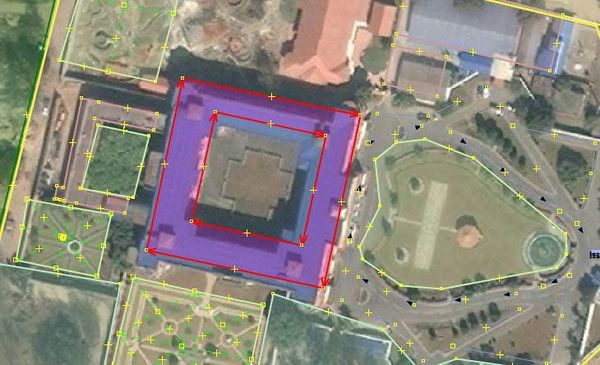 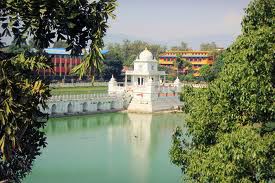 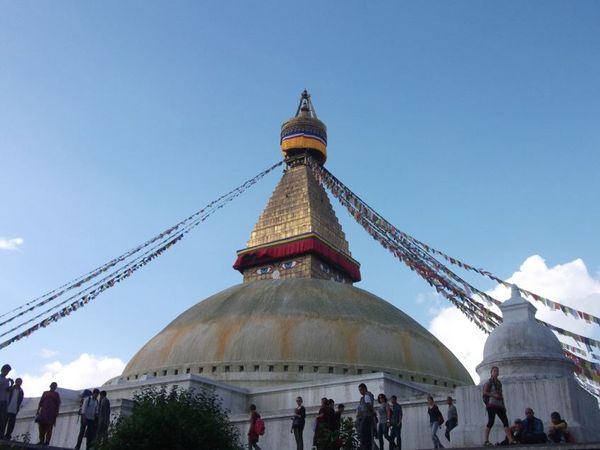 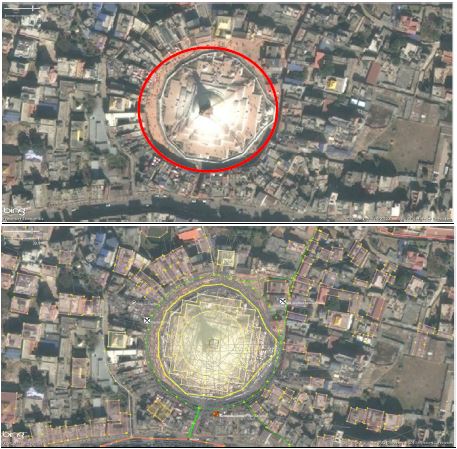 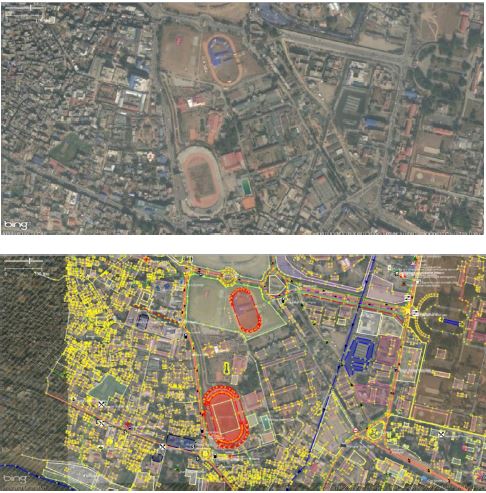 Common Issues in Mapping :: For all Levels

No matter which mapping editor you use, you will encounter some common issues.


Offsets
Sometimes you will find a situation where all the mapping appears to be slightly off from the image. An OSM beginner might believe that the roads have been traced incorrectly and thus move the roads to what appear to be the better location.
Moving the road may be completely WRONG!
The problem more likely is the georeferencing of the image. Georeference is a term for how the imagery was set, or how closely the imagery matches the actual locations on the ground. This a relatively complex process, and the greater the terrain variation and relief, the more difficult the georeferencing. Satellites are hundreds of kilometers from the surface of the earth and, when they take flat pictures to represent the curved earth, there is bound to be some distortion and offset.
If editing with iD, when you find offsets, check with the person in charge of the particular task area. They may be able to make corrections.

(JOSM) Using imagery and dealing with offsets where there is existing data in OSM
The rest of these solutions relate to the JOSM editor. A section for the iD editor will be added soon.
Sometimes in JOSM, after downloading OSM data, adding the imagery, and zooming into the best resolution, you realize that the existing OSM data, especially roads, does not correctly overlay the imagery objects. 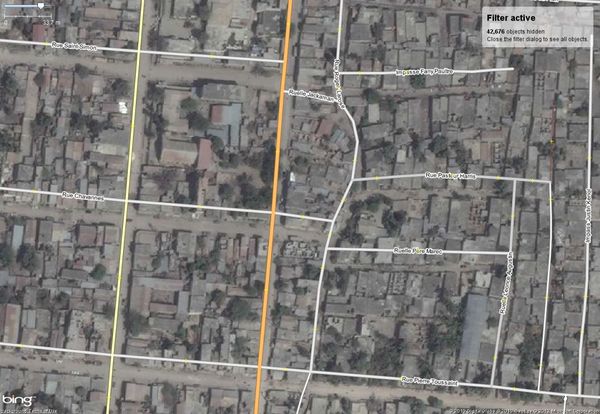 There is a potential that the imagery is poorly aligned in comparison to the reality in the field.


One way to check or prove that the imagery is offset is by using GPS tracks:


Click on the DOWNLOAD DATA button, then tick «Raw GPS data» near the top in the «Download» window. After downloading, an additional layer «Downloaded GPX data» will appear. 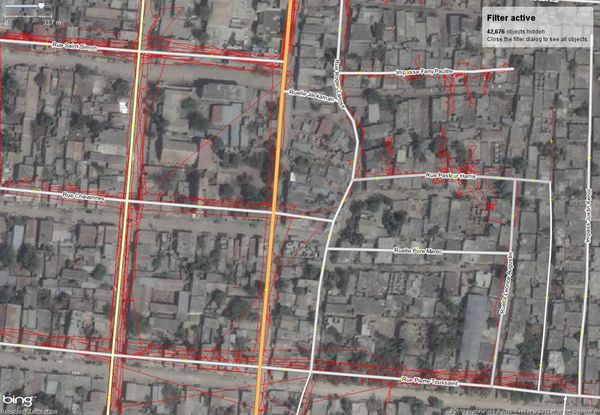 In this example, with the GPS tracks (in red) added you can see that the existing data (here: the roads) is not positioned correctly.
The imagery is actually not correctly georeferenced, and has an offset in comparison with the reality. It has to be adjusted.
To offset imagery, right-click the imagery layer or menu «Imagery», open «New offset», or use the imagery adjust button in the left toolbar.
Then drag the imagery so that it is correctly overlaid by the tracks. Click on another tool when it is over. 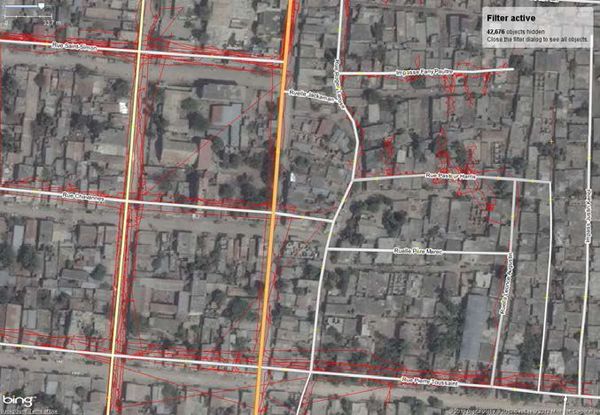 Now that the imagery is adjusted you can trace over it. While mapping you can hide layer «Downloaded GPX data» if it interferes with your work.
One last thing to remember: the offset might not be the same over the extent of the imagery! This is especially true in regions with a marked relief.
So when the imagery seems to be offset again, repeat the whole process.
Dealing with offsets in an area where there is no existing data in OSM
It may happen that you are the first one to OSM map an area, e.g. in remote rural areas or in developing countries.
Therefore, neither existing OSM data nor GPS tracks can be downloaded. Use existing data: If you cannot go into the field then another option is to gather other Open Database License data (ODbl).
If you can it is best to check the imagery with another image that is correctly aligned, e.g. download other Images (Tab: Imagery in JOSM main menu) as base layer and compare the different
satellite images.

How to trace building footprints correctly

Using either iD of JOSM you may find a situation where a tall building appears to be leaning to one side, because of the angle of the satellite photo. In this case it is important to trace the base of the building, not the top, and to make it rectangular. JOSM has a Building plug-in to help with this:

This plug-in is by far one of the most useful tools for editing (digitizing). This tool allows you to create shapes with 90 degree corners with just three clicks.
To install the plug-in: Preferences in MenuBar → Plug-ins → search for building plug-in on the list.
First, you trace the edge of your building and then you drag out the line to make it a polygon. 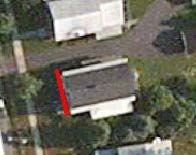 You can also create more complicated buildings by using the merge option. Create your building outline, select all of the polygons (press SHIFT to highlight them all) and then hit SHIFT + J to
merge the objects.

Below we see part of the building is covered by the shadow of another building. In this case you have to reference the other edges of the building and digitize accordingly.
The picture on the far right is correct.

Below we see part of the building is covered by trees. Again, use your intuition to digitize as best you can. The picture on the far right is correct.

How to trace roads correctly

OSM can identify where objects end and what labels these objects should have. However, it needs your help in doing so. For example, if you create a road that turns into another road without a node, then JOSM will continue labeling the road as the previous one. Therefore, it is necessary that you make all of your roads and objects as clearly as possible.

What is the actual layout of a building?

Sometimes buildings are very high or the image was taken not in exact nadir. In such cases it is important to have an idea about the actual layout of the building:

Road networks are often the most-mapped features in OSM. Roads are often easy to spot from even poor quality imagery. However, it can sometimes be hard to know how to classify a roads. For suggested tags specific to Nepal, see the Nepal/Roads page.

Common OSM Tags for Natural Features and Buildings in Nepal

Below you can find a list of the most common key=values for buildings and the natural environment in Nepal (examples have been chosen where both an image from Wikimedia and aerial images can be shown, mainly from the Marsyagdi valley on the Annapurna circuit which is well-documented with tourist photos):

Writing of nepali names in english