Many roads have their junctions numbered. For example, all UK motorways; or the A14 which isn't a motorway. Some also have junctions named on the approach signs, e.g. "Four Wentways" where the A505, A604(?) and A11 meet south east of Cambridge, or "Charlie Brown's Roundabout" on the A11 near Epping.

The Black Cat roundabout on the A1 is another example, particulary since it seems to be regularly subject to accidents and is cited in traffic bulletins as the 'Black Cat' roundabout rather than the 'Roundabout at the junction of the A1 and A421'. I support the proposal -- Batchoy 12:59, 19 December 2006 (UTC)
I think this is a good idea too. We're also building a list of named junctions on wikipedia - http://en.wikipedia.org/wiki/List_of_road_junctions_in_the_United_Kingdom - based on user contributions and information from statutory instruments. I don't know how easy this data is to link to open streetmap, but it would seem advantageous not to have to collect the data more than once. -- C2r 08:37, 6 February 2007 (UTC)

Just thinking about this a bit more - what if a junction is known by both a name and number e.g. Charlie Browns (junction of M11 motorway and North Circular Road in the UK. I guess we would want the junction number to be able to be rendered when zoomed out further, but the name visible close up... would the syntax allow for e.g. "4\Charlie Browns" C2r 21:34, 19 February 2007 (UTC)

Should name not come under the name tag? There already exists junction=roundabout. Why not simply use the same tag? e.g. junction=4, name=Charlie Brown's. Higgy 22:01, 19 February 2007 (UTC)

The proposal of packing two separate things into one field is not good. Don't do it. The basic idea of providing a measure for noting named and numbered junctions are however good. They start to appear in Sweden too. I would vote yes to this proposal if there were some basic information about how to tag and so on. If the proposal contains packing as proposed by C2r I would vote no. Karlskoging1 22:04, 19 February 2007 (UTC)

Just to point out that mine was a question, not a proposal! Being fairly new, I don't (yet) have enough knowledge as to how the best way forward with this would be - apart from the need for consistency with practice; but I think this needs to be thought about in more detail. Yes, simple crossroads or miniroundabouts that are named could easily use the existing node, with, eg. highway=mini_roundabout, name=Hunts Lane Junction --- but what about larger roundabouts or grade separated junctions that use lots of nodes? we could have a number=x tag but still, which node would we choose, or would a new node at the centrepoint of the junction be required? Thoughts anyone? C2r 07:56, 20 February 2007 (UTC)

The purpose of this proposal is to put a visual indication of the junction number/name on the map near to the junction. name on junction=roundabout ways doesn't do it because it applies to all sorts of junctions. Consider a grade separated bridge with four access roads, or a clover leaf or whatever. There is no obvious node or way to attach to. Having 'super-ways' which group ways in related aspects would solve this, but we don't have that (yet). Furthermore, attaching the reference to a Way (or a node which is part of the junction) will make it hard for renderers to render it - they'll have to do it as a special case, so it is unlikely to happen. I agree with the sentiment, but I think on grounds of practicality it is problematic. Perhaps we can readdress this if we ever have superways.

Secondly, the possibility of a name and a number is indeed likely, but if we just render the text as given, we'll achieve that. junction_ref="9: Charlie Brown's Roundabout". Indeed the same applies when you have two motorways with separate numbering meet: "9/37" (this is what actually appears on the signs in the UK where this happens, e.g. M62 and M1 meet near Leeds).

If we had separate junction_name and junction_number properties, they would appear as separate rendered objects on the map. Maybe that is a good thing. If enough of you feel that way and say that in voting against, I will then put a revised proposal to that effect.

Let's keep it simple. It is more likely to show up on the map if the implementation effort is not hard. 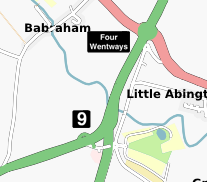 I haven't changed what I am proposing, which is as below, an indpendent node near the junction. We just don't have the means to associate it with a junction directly at present other than in special cases, and even those would be hard to render. David.

The proposal is for a node tag name junction_ref with an arbitrary string value with no specific syntax embodied in it.