This proposal introduces an easy way to model traffic signals at any kind of intersections in a more detailed way. Two factors are missing in the current modelling:

Current discussions on this topic are often resulting in increasing the geometric complexity of intersections by mapping each lane individually. We suggest to use relations similar to the turn restriction relation but for every incoming way to an Intersection. The relation specifies the duration of red and green light phases for every turn possibility and specifies the outgoing- (to-)way

Routing algorithms will be considering traffic signal phases in the not too distant future. OSM should provide a best practice to model those in order to help routing application developers. Also for traffic simulation it would be a huge benefit and cities could become more efficient. Intersections are built in many different ways and the modelling in OSM at the moment does not always reflect the real world. For flexibility the concept of using relations is a very helpful and a powerful tool.

An Intersection with traffic_signals shall be represented through one relation per incoming way. Please note that one intersection can comprise more than one node. This relation includes the traffic-signal node, one incoming way (from-way), one to-way, and optional via-ways which connect the from- and the to-way in complex intersections.

One node with the key highway=traffic_signal. It represents the geographic location of the traffic signals.

One from-way has to be included in the relation. If the node is tagged at the crossing and the way ends at the node, the driving direction the traffic signal applies to is obvious. If the same way continues after the node (the node is not at the end of the way) clarification can be achieved by from:forward=* or from:backward=*. Example:

For every turn possibility there should be a to-way specified. The vales of the turn key introduced in Key:turn are used as identifiers

Additionally the value crossing instead of the mentioned turn values can be used to define the timing and the occurrence of a pedestrian crossing traffic signal.

This clarifies the destination of a specific turn since that is not always obvious for complex intersections. If turn:lanes are available in the from way, the traffic_signal can be assigned to a specific lane because the same keywords are used.

Here is an example for a complex intersection: 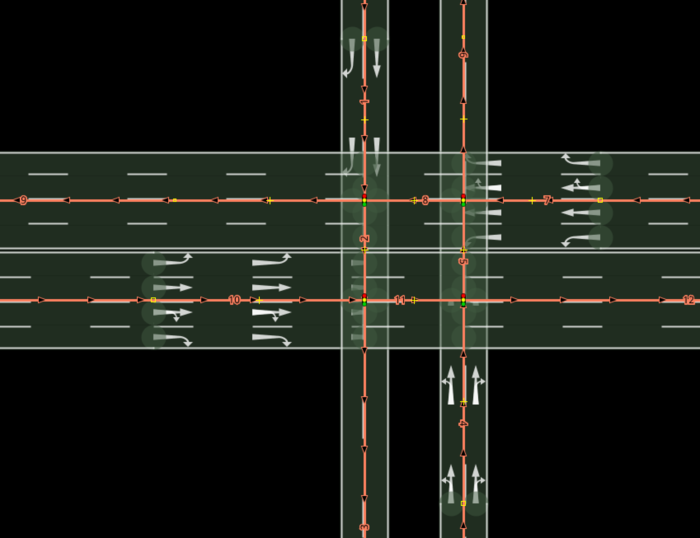 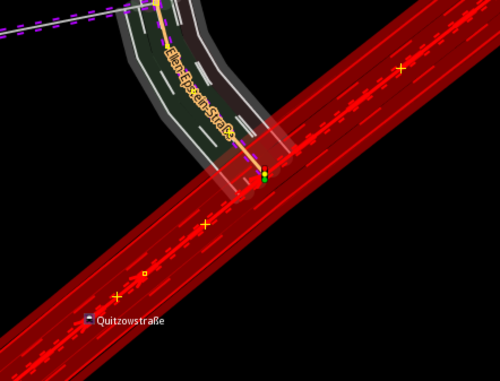 turn_restriction turn restrictions could differ from the possible turns in this relation. In that case users should consider which is the valid restriction for this case.