In this proposal, a 'trail' is a trail/path/track that is not built on purpose but the result of use and wear on the terrain, often narrow and in general unpaved. The concept of trails formed by wear should be pretty much universal and as old as mankind. Practically everyone should be familiar with the concept. Also, it is possible to identify with high likelihood if a pathway surface is formed by wear or if it has an applied surface. Some exceptions (listed below) to this main condition need to be allowed as trail improvement and maintenance efforts may upgrade short sections of the trail.

Please note that acceptance of this proposal does not require:

Current documentation of highway=trail on the wiki

highway=trail is not a new tag. It's an old tag that's already documented on the wiki (since 2009). However, the tag has been abandoned and its use is currently discouraged. This new proposal aims put new life into this old tag. If this proposal is accepted, the highway=trail wiki page will be updated. We believe that this new proposal does not contradict with the current highway=trail definition, instead it just amends the definition to be more precise.

Beware that this tag was also proposed back in 2007, but with a different meaning. That proposal was withdrawn, and highway=path was proposed instead. For the proposal from 2007, see Proposed_features/Trail.

The tag highway=trail is used for mapping pathways that have their surface formed by wear, that is, mainly through forces of erosion due to people using the trail. However, the trail corridor may be cleared by trail maintenance efforts, especially in case of official hiking trails. Also, erosion or hazard prevention measures (e.g., duckboards) are occassionally built on trails, for sections with varying lengths.

Trails can be informal or they can be part of an official hiking route.

A constructed way whose applied surface is just "damaged" by forces of erosion is not to be tagged with highway=trail.

For trails that are wide enough and suitable for two-track vehicles (e.g., tractors, jeeps), highway=track has priority over highway=trail and should be used instead.

Trails have different visibility. When passing over bare terrain, a trail may be hard to identify. If the trail is known to exist (for example because it is trailblazed/marked or because only short sections are invisible), it should be mapped. See also trail_visibility=*.

Some trails have boardwalks or similar structures that allow passage to nature areas that would be otherwise impractical to access, mainly due to water (many of such constructs are dual purpose to also prevent erosion). In case such construct is entirely isolated by trail(s), it is better to tag also them with highway=trail. If a footway/path connection to such boardwalk exists, one should consider using primarily highway=footway or highway=path for such boardwalks.

In this proposal, the word 'trail' and the tag highway=trail is used in the narrow sense given in the definition above. However, we are aware that the word 'trail' can have different meanings and connotations in the English language. The word 'footpath' and the tag highway=footpath may be better choices than 'trail' and highway=trail to describe the kinds of trails/footpaths that are covered by this proposal. This is open to discussion.

For the sake of simplicity, 'trail' and highway=trail is used throughout this proposal.

A simple way to tag trails is needed

It should not be any more difficult to map and tag trails than other kinds of paths/roads/ways. A simple way to tag trails and distinguish them from other highway=* types is needed.

Currently the highway=path tag is the most common way to tag trails (partly due to the lack of a more specific highway tag for trails). In some countries though, highway=footway may be used more often.

highway=path is a generic path, either multi-use or unspecified usage, open to all non-motorized vehicles. The path may have any type of surface. This includes walking and hiking trails, bike trails and paths, horse and stock trails, mountain bike trails as well as combinations of the above. Also included are other modes of transportation like local and regional trail infrastructure non appropriate for motor-vehicles in more remote areas of the world.

Because of the generic definition of highway=path, it is open to interpretation (and misinterpretion). It is well known that there's some controversy and confusion around highway=path and its relationship to other tags (especially to highway=footway).

As this proposal does not include neither a redefinition of highway=path nor its deprecation, it does not try to solve all the issues surrounding the highway=path tag. It does however introduce an easier and less ambiguous way to tag trails.

Tags such as surface=*, trail_visibility=*, sac_scale=* and width=* can be used to indicate the physical characteristics of a trail tagged with highway=path. However, the physical characteristics of a trail can be very varied and in fact change several times along a short stretch of the trail. In these cases it gets very complicated (and sometimes practically impossible) to identify the trail if one has to rely on these additional tags simply to indicate that it is a trail and not some other kind of path covered by the highway=path tag.

The tag informal=* can be used to distinguish paths built on purpose from informal paths. Thus, it can be used to indicate that a way tagged highway=path is a trail. It is, however, hardly used at all; even less than highway=trail. Besides, the word 'informal' will in many cases be a misleading word. A trail that is part of an official hiking route, signposted, trailblazed and/or has stretches with duckboards or bridges, can hardly be said to be informal.

Just like footways and cycleways can be mapped with highway=path in combination with additional tags (e.g. footway tagged as highway=path + foot=designated instead of highway=footway), so can trails. People who prefer to tag trails as highway=path can continue to do so.

The tag highway=footway is used for mapping minor pathways which are used mainly or exclusively by pedestrians.

The tag highway=track represents roads for mostly agricultural use, forest tracks etc.; usually unpaved (unsealed) but may apply to paved tracks as well, that are suitable for two-track vehicles, such as tractors or jeeps.

Examples of ways that can be tagged as highway=trail 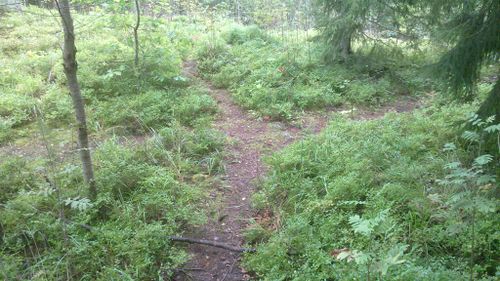 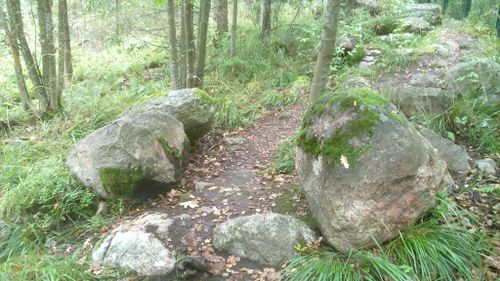 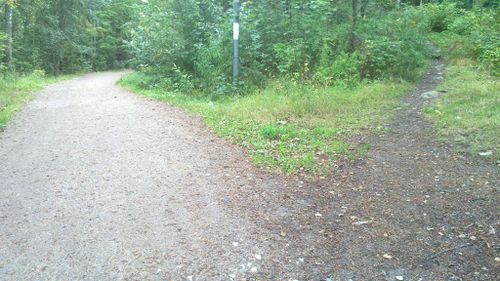 Cycleway to left and trail to right. 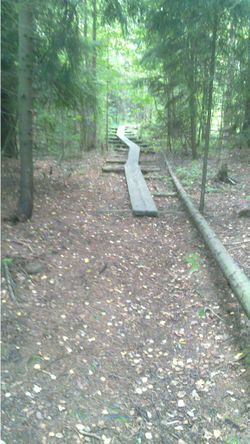 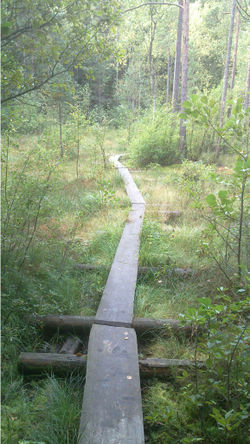 ...The duckboards allow passage over natural=wetland on a protected area. The access would be impractical without duckboards at least when the water level is high and they also serve to protect the sensitive ground vegetation. 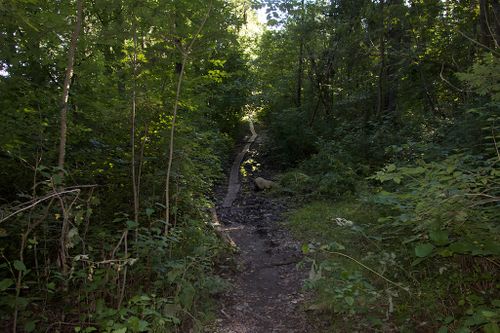 Duckbords along a muddy section of a trail. 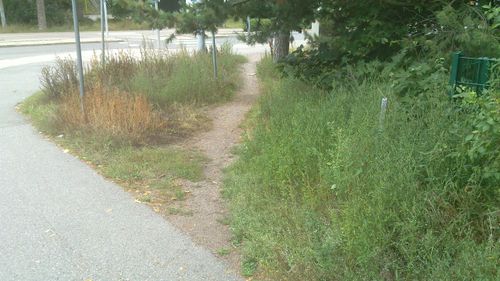 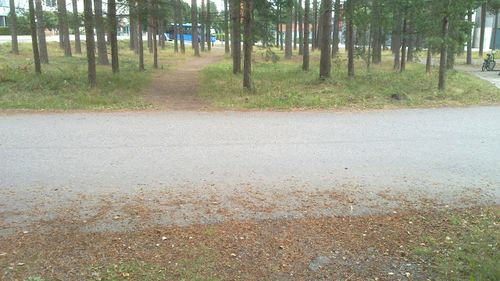 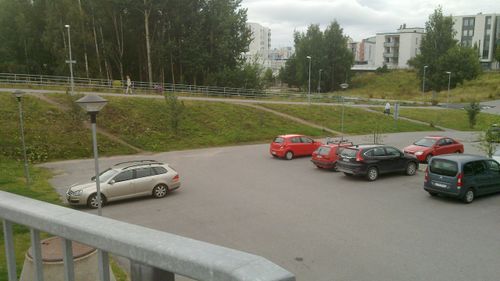 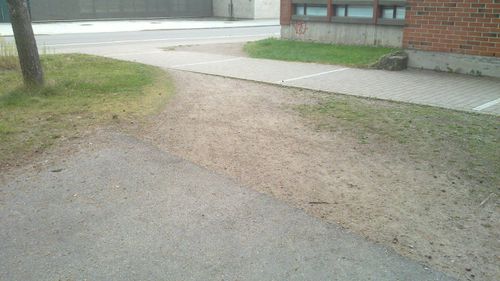 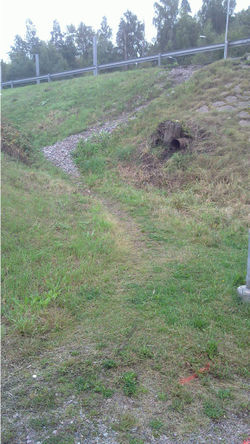 Note how erosion of the trail is even damaging the foundations of the pavement on the upper road. Obviously the surface=gravel is not applied for the trail but is from the exposed base of the embankment leading to the bridge.

Examples of ways that should not be tagged as highway=trail

Some nature trails or parts of them use built-up ways. Thus, they fall outside the scope of the definition of highway=trail. They should instead be mapped with highway=footway, highway=path, or highway=track.

To map a trail, nothing else than a simple way with the highway=trail tag is required.

Trails as part of hiking routes or mountain bike routes

A trail can be part of one or several hiking or mountain bike routes. These routes are best tagged by adding the way to a relation. See Hiking and Mountain_biking for more information about how to tag such routes.

Unless surface=* is set, surface=ground should be assumed.

As with any other highway=* tag, default access restrictions for specific countries should be decided by the local communities based on national legislation and other relevant factors.

Unless explicitly tagged, wheelchair=no should be assumed.

Trails are generally unsuitable for road and city bicycles, even if regulations would allow legal access to bicycles. If the trail is suitable for such bicycles, consider indicating it by adding class:bicycle=*. Difficulty of the trail for mountain bikes can be indicated using the tag mtb:scale=*.

The tag highway=trail applies to ways only.

It will be up to local OSM communities to decide if they want to retag trails in their area to highway=trail.

If this proposal is accepted, the highway=trail wiki page must be updated.