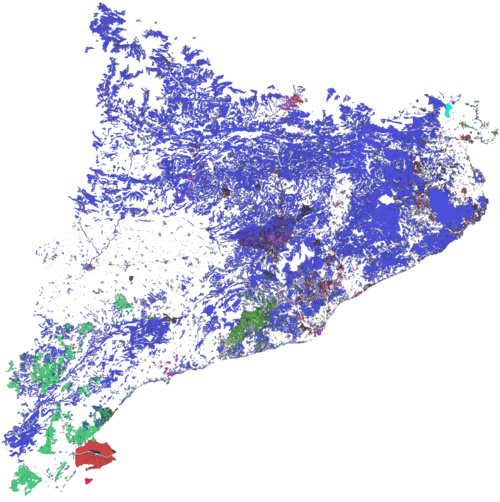 OSM Landuse data in Catalonia as of March 2019. 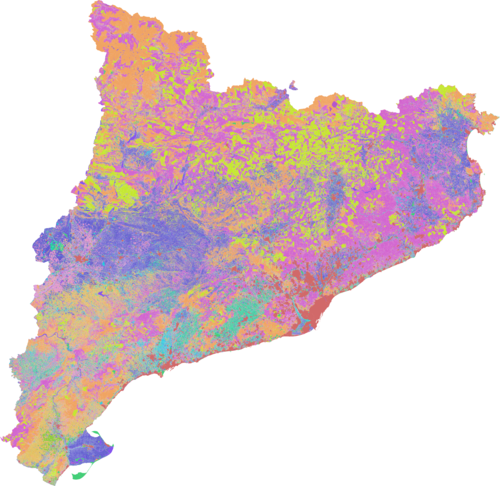 This page describes a plan to import high quality landuse data in Catalunya (Spain) using the most updated data available from the local government.

On every resulting municipality, polygons with same landuses will be merged to simplify data. After that, landuse attribute will be translated into the best matching OSM tag and uploaded to the database.

In general terms, there is a lot of work to be done about landuse/landcover data in Spain.

There was an attempt to improve that situation by the Corine 2006 import done in 2011. The oversight in that import was the minor use of the released data; 45 layers were provided in the entire dataset, but only 4 layers were finally imported in Spain, corresponding to 3 forest layers based on leaf type and one more layer with olive trees coverage. For the same data, we do have some examples of full Corine imports done in some other European countries (see WikiProject_Corine_Land_Cover) like the French Corine import, where 30 layers were imported in 2009.

Relying on 2016 data, olive trees are 12% of the cultivated land in Catalonia (source), so the Corine import put aside the vast majority of agricultural areas in this region which has 66% of agricultural zones destined to arable crops. Local mappers have to deal with lack of quality of that import which was generated with a scale of 1:100000 (see Corine 2006 metadata), resulting in sharped polygons with no correlation to ground reality (see sample comparison picture). Due to the extension of the data (entire Europe), polygons were split in straight vertical oblongs that can be seen on the map renders.

Even if Corine import was supposed as a good one, it's been 13 years since the original data was generated, and we should keep in mind the changing of the land uses as time goes by. Some strong wooded areas in the Catalan Pyrenees, including national parks and nature reserves, have partial or no forest coverage. Same occurs for the main farming areas located in occidental and southern parts of Catalonia.

This situation can be vastly improved with this import.

The european regulation 1306/2013 of 17 December 2013 forced the Spanish government thru the Ministerio de Agricultura, Pesca y Alimentación (Ministry of Agriculture, Fisheries and Food) to create an identification system for agricultural parcels and aid applications from farmers with a minimum scale of 1:5000. The Spanish application of those regulations became in the creation of SIGPAC system (Sistema de Información Geográfica de Parcelas Agrícolas - Geographical Information System of Agricultural Parcels).

SIGPAC is a geographic information system, and is the only valid reference system for the identification of agricultural parcels, for the purposes of the management and control of the aid regimes established by the Community Regulation. It is also the reference system for aid schemes in which the agricultural plots must be identified. In accordance with article 3 of the Royal Decree 1077/2014, of December 19th, the SIGPAC is a public registry of an administrative nature that depends on the Spanish Agricultural Guarantee Fund and the autonomous communities.

In the autonomous community of Catalonia, the SIGPAC system relies on both the Spanish government and the Departament d’Agricultura, Ramaderia, Pesca i Alimentació (Department of Agriculture, Livestock, Fisheries and Food) of the Generalitat de Catalunya (Government of Catalonia). In 2017, the Government of Catalonia released their SIGPAC datasets under a Open Data License. The datasets are being updated and released once a year since then.

Catalan region data is digitized at 1:2000 or higher resolution using aerial imagery from the Institut Cartogràfic i Geològic de Catalunya at 25cm per pixel resolution, producing a 1:5000 scale map with minimum polygons of 20 square meters. The high level of detail can be checked on the SIGPAC 2018 render, where polygons are classified by landuse type.

The latest available dataset is the 2019 release, made with aerial imagery taken from May to October 2018 (data can be browsed here).

The datasets are published by under a custom Open Data License, following European Directive 2003/98/EC on the re-use of public sector information.

An explicit permission for using the datasets in OSM was granted in June 2018.

The datasets can be downloaded by county from the Catalan Open Data portal. Each county dataset consists in a compressed zip file containing a shapefile (SHP) with polygon geometries. Although the files contains both cadastre parcel and landuse polygons (see picture above), only the last one is used. Using its attributes, the shapefile is divided in municipalities and later similar landuses are merged to simplify data.

The ID_MUN column will be used to identify municipalities. US column will be translated to a OSM equivalent landuse tag. There are the proposed translations between tags:

Most of the current landuse polygons are there since the Corine 2006 import. Due to the big difference in accuracy (minimum Corine polygons were 5 hectares, in SIGPAC they are 0.002 hectares) those polygons should be replaced by the smaller, newer ones, in order to improve to the better quality the new data has to offer.

To be done by import responsibles

To be done by mappers

The main duties of the mapper will be: