From OpenStreetMap Wiki
Jump to navigation Jump to search
Tag:sport=american football - Other languages

American football is a team ball sport with similarities to rugby and to other sports known as "football".

In the U.S. this sport is known simply as "football" however this word is clearly too ambiguous for use as a tag. We should be more precise with this full tag sport=american_football.

Note also that this sport is not only played in America. The tag is perfectly valid elsewhere in the world. The sport is sometimes called "gridiron" due to its characteristic playing field, which is marked with a series of parallel lines resembling a gridiron. Canadian football, sport=canadian_football, is played on a similar gridiron pitch (see below for mapper-visible distinctions). 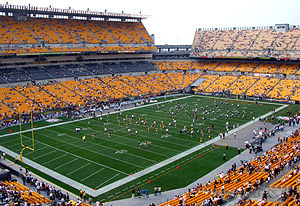 Add this tag to any place where a field has been setup for playing American football.

The tag sport=american_football (all lowercase with an underscore) should be combined with a physical tag:

sport=american_football and sport=canadian_football fields are similar at a glance but have some differences that should be obvious on the ground or from higher resolution aerial imagery: