Status of this tag

Recently the status of this tag has been set to "abandoned", I suspect because the status of the corresponding proposal is "abandoned". But I think the status of a tag is something different than the status of a proposal. If a tag, like this one, is used more than 1900 times, used worldwide, and usage went up constantly, I think the status should rather be "in use" even if the corresponding proposal is "abandoned" because the proposer was no longer active in the wiki for some years. Is there anywhere a text that explains why I am wrong? Maybe the status can be set to deprecated, but only after some discussion and some consensus; compare Talk:Riding#landuse=animal keeping, open_stables, paddocks --Hufkratzer (talk) 12:05, 1 August 2018 (UTC)

Yes that was the reason for it. If the status of the tag is divorced from the original proposal, what's the point in even having the status option available on the tag page in the first place? Since that would mean every tag would just by default be in use? Personally, I think forgoing proposal status and basing the status of a tag on other metrics like number of uses or if a better tag has replaced it or not, is a much better way to go. As it is though, that's not currently how the system is set up. The status on the tags page is meant to represent the status of the proposal.

Also, I think showing the status in cases like this where the proposal has been abandoned should be even more necessary, due to the fact that the original creators of the tag themselves decided not to use because it was not a good tag for whatever reason. There should be a reflection of that somewhere on the page for lay editors who don't get the nuance of the voting process etc or might be mislead into thinking it is a top level de facto tag when there are better ones out there because they don't know about the proposal page. I also think "in use" should be reserved for tags that have been adopted widely through organic means other then proposals, or where the proposal process is still on going. Technically we don't know if this or tags are currently "in use" anyway, as the uses could of been mapped during the originally planning of the tag or if not, might just be flukes. To me, there is a difference between usage and status. The "switch" is status, not usage. Usage can be used when when no status is available as a place holder until there is a status, but they are clearly separate things. As far as this tag goes, there are much better more accepted tags out there for the same thing and it was rejected by its original creators. So it should be reflected on the page somewhere. Every tag is in use though. So its a completely worthless status. Especially when there is a more descriptive one that can be used. --Adamant1 (talk) 19:15, 1 August 2018 (UTC)

Difference from landuse=meadow and landuse=farmyard?

The definition of this tag seems to strongly or entirely overlap with 2 much more common tags:

I don't think there is a strong need for this new tag. Mappers could use the more common tags above, and use farmyard=* to specify the use of the farmyard as a paddock or stable, or meadow=pasture for pastures, etc. And to tag the type of animal, livestock=* is another option. --Jeisenbe (talk) 12:49, 19 August 2019 (UTC)

Sorry but you are running through the wiki like a bulldozer, changing lots of pages to your personal opinion and understanding, and opening new issues before the older ones are settled. Please respect that the world is more complex and heterogeneous than you and me can imagine. I consider a 'farmyard' as a core hub of the farm business, unsuitable for wider land. 'Meadow' requires grass for the grazing. Thus I'd see the 'animal keeping' suitable for situations where wide land without grazable vegetation is used to keep the stock, which is fed with nutrients delivered to them. Typically where climate allows. --Polarbear w (talk) 13:22, 19 August 2019 (UTC)

The tag "farmyard" has been used for features like feedlots, which include buildings and unvegetated yard ares for keeping livestock (usually cattle) for feeding prior to sale. https://taginfo.openstreetmap.org/tags/farmyard=feedlot

I apologise if I have made any edits that are based on opinion rather than factual usage of the tags in the database. Please change any that or incorrect or let me know what mistake I've made, and I will correct it. My attempt is to document how tags are used, but I'm sure my own biases and preconceptions are oftena problem. --Jeisenbe (talk) 13:35, 19 August 2019 (UTC)

Looking at Riding and the proposal, it looks like the main intent was as a tag for horse paddocks, including things called an "open stable" or "field shelter" for horses (translated from German - these terms are not known in American English). This suggests that equestrians may not consider landuse=farmyard appropriate for areas used to keep recreational/pet/sport horses. Coming from a horse-riding family, I'm aware that equestrians, especially those involved in the formal European-style events like stadium jumping and dressage, don't consider their activity to be very closely related to farming, though a horse paddock might look quite similar to a paddock or pasture used for cattle, goats or sheep in many other ways. But in the USA there's still "Western" style riding, which includes Rodeo sports developed from pure agricultural practice required for herding cattle.

So now I understand the motivation to separate horse corrals / paddocks from landuse=farmyard, but I'm not convinced this is a distinction that non-horse-enthusiasts will understand clearly. It might be better to have a limited definition for horse paddocks/stables only, in particular, for horses which are not used as farm animals. Under the current broad definition, couldn't the tag be used for zoos and aquariums (see the value animal_keeping=orca for example) which have their own more specific tags, fenced areas used for family pets (animal_keeping=dog is used) which are part of landuse=residential, and clearly agricultural areas like sheep pastures and commercial egg farms, cattle feedlots, etc? I don't think it would be helpful to combine those diverse features together under the concept of animal keeping. --Jeisenbe (talk) 02:43, 20 August 2019 (UTC)

@Hufkratzer:, I believe the "see also" section is fine for tags that are someone similar yet different. However, when there are tags that have overlapping usage, this should be stated up at the top of the page, in the first or second paragrph. For examples, see place=village and place=town, highway=unclassified and highway=tertiary, and in particular landuse=farmyard - all of these pages mention the difference between the tag and other similar tags, either in the top paragraph or in the second section. The later is quite similar to this tag, and it mentiones landuse=meadow and landuse=farmland. Shouldn't the landuse=animal_keeping page follow this pattern? --Jeisenbe (talk) 10:24, 21 August 2019 (UTC)

The only difference you mentioned was that landuse=farmyard and landuse=meadow are more common. Do you also want to recommend farm_auxiliary at the top of the pages for stable, sty and cowshed because of this? If you want to compare numbers you have to compare with the combinations with something that indicates the use of the land for animal keeping. Then it looks like this:

compared to 2179 for landuse=animal_keeping. I would say in tolal it is more or less the same and for horses/livestock alone animal_keeping is used much more (compare taginfo and tagging)

Note that you are comparing a sub-tag (lifestock=/animal=) to a main feature tag (landuse=animal_keeping). Also note that animal_keeping=* is also used 237 times on ways tagged landuse=farmyard and =meadow. There are other ways to designate a farmyard or meadow as being used for animals, eg meadow=pasture (>9000), meadow=paddock (317), farmyard=feedlot (614), farmyard=poultry (407), etc. - overall we can't say exactly how many features tagged landuse=meadow or landuse=farmyard are also used for animals, since it's likely that many do not have any additional tags, but it's more than the table above suggests. --Jeisenbe (talk) 02:22, 23 August 2019 (UTC)

I didn't invent this tag and I am not especially interested to promote it. I only think it is misleading to put it in a way as if numbers were suggesting to use other more general tags instead. Perhaps you can express it differently. --Hufkratzer (talk) 22:25, 22 August 2019 (UTC)

I didn't clearly state how one should distinguish between landuse=animal_keeping and landuse=meadow or landuse=farmyard because I don't know how to describe a clear distinction. I'll ask on the Tagging list. My guess is that landuse=animal_keeping should be reserved for areas used to keep large animal like horses, which are not a pasture, meadow, or farmyard. That's why I just described landuse=meadow and landuse=farmyard in detail.

Consider how the other tags are described on a page like place=town: "larger than a place=village, smaller than a place=city, and not a place=suburb."

I would like to write something like that for landuse=animal_keeping, but with more details if possible. Do you know more about how to distinguish it from the other two tags? --Jeisenbe (talk) 02:22, 23 August 2019 (UTC)

From what language does the term "Open stable" originate? I can't find any definition for this in American or British English. And searching for "Free barn" and "field shelter" is no help either. Is this a pen or paddock or corral that is used as a stable? Is it a small shelter with a roof and no walls, or one to three walls? In what country is such a structure used as a stable? --Jeisenbe (talk) 13:01, 19 August 2019 (UTC)

Yes probably shelter without walls, as far as climate allows. There was a story in the 1950s when East Germany imported the idea from warmer regions in the Soviet Union, and stock was massively dying since the winters were much colder. See Rinderoffenstall in German for the story and images. That the term is not common in English might have the reason that the concept is unknown in the climate of Britain. --Polarbear w (talk) 13:30, 19 August 2019 (UTC)

I don't speak German, but the an automated translation suggests that these are roofed buildings with maybe 1 or 2 walls, but a couple of open side. The picture looks like what we call a "pole barn" in the western USA. Since California's climate is mild, it's quite common for feedlots to have roofs with no walls at all. It certainly meets the definition for landuse=farmyard since it is an area with farm buildings + surrounding yard areas, no? 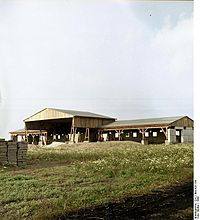 This US webpage says: "... open stabling is an open-format barn that lacks the walls, doors, gates, and bars of contemporary stabling. An open stable can be simply a metal pole barn with kick guards or a space semi-divided with pipe fencing or even corridors of electric fencing to separate individual groups of horses." But in Germany, AFAIK, "An open stable is a type of housing in which several horses live as a group. There is an indoor and an outdoor area, if possible with direct pasture access..." This was a translation from a part of this German page. This US page speaks of "group stalls" and this page calls it "group stabling". An "active stable" is a special type of "open stable" where the horses have to move a lot to get everythng they need (because that's healtthier), here is a page and a video in English which explain this:
* https://aktivstall.de/en/concept/
* https://www.youtube.com/watch?v=4_AtSXlpVMg
--Hufkratzer (talk) 22:33, 22 August 2019 (UTC)