From OpenStreetMap Wiki
< User:Stanton
Jump to navigation Jump to search 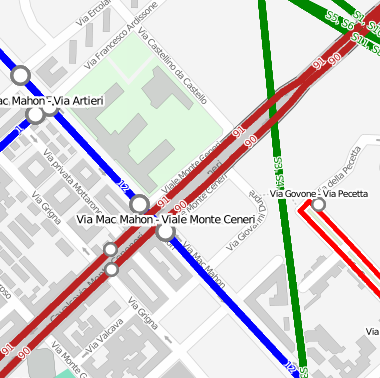 Many public transport companies already offer city maps with bus, tram, metro and other lines superimposed on them. OSM has all the necessary data to offer a similar view - with world-wide coverage, using the same familiar layout wherever you go, and free for anyone to use, copy and modify. This page is the central repository for a project to integrate just this functionality into the main OSM page.

Add another map layer and overlays to represent public transportation lines to the main OSM page. Where possible, reuse OSM infrastructure and make standard OSM tools (namefinder, export) available. The solution should be "grandma-proof", i.e. it should be simple enough so you can tell your grandmother (or any other non-techie of your choice) to "go look up your bus connection on OSM" without confusing her.

Many public transport companies already offer city maps with bus, tram, metro and other lines drawn on top of them - but with the usual copyright restrictions, and each company has their own layout.

The big commercial player in the field shows clickable stops on their (non-free) map, which will return the lines serving it, but there is no way to show the route of a line. Their transit platform still does not cover many cities (e.g. Munich, Milan). In Milan, bus stops are missing completely on the map, the location of subway stops is approximate at best and the network data seems to be out of date. We can surely do better than that - steps 1 to 2a (see below) would already put us ahead of them.

OSM already has the raw data needed to offer a free replacement for all of the above, and some efforts have been made already. However, they all have some restrictions:

In short, we have a handful of "islands", and even though some of them have quite nifty solutions, there is no "definitive" site yet.

Having such a map as another map view on the main OSM page would give us some advantages:

Several sites already provide public transportation maps with some good approaches (which we should learn from) but also some drawbacks or limitations (where we should do better).

Öpnvkarte is not getting any updates at the moment; the maintainer explained in a post to talk-de:

The problem is that the server can't handle the data load any more. Since currently I've reduced my effort on OSM, I haven't really gotten around to fixing it yet.

latlon.org offers a public transport layer but in fall 2010 reduced coverage to Russia and some neighboring countries (before it also covered at least Western Europe).

Openptmap was created in response to Öpnvkarte not being updated any more. It is intended for quick verification but not as a full replacement for Öpnvkarte. It runs on limited hardware, thus functionality is limited.

OSM Inspector is intended as a debug tool, not for looking up information on a map. It offers a Public Transport background layer, which uses tiles from Öpnvkarte.

OpenStreetBrowser is a feature-rich map UI which, among others, offers a public transport layer.

Following the iterative approach with which OSM was and is being built, here's how it could be implemented:

Display routes and numbers in color on top of the map, preferably as a separate layer (this allows us to reuse the black-and-white background for future applications and gives us some extra flexibility in Step 2a).

Add a new overlay, which makes all stops clickable. Clicking on a stop opens a popup bubble with information on it, such as name and lines stopping there.

In the popup for each stop, links or icons next to each service are available to:

Up to the imagination of the community:

The color scheme resulted from collaboration with Ieskok, studying of topographic transport maps in several European cities and attempting to use the predominant colors as far as possible.