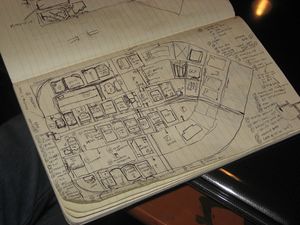 You don't need fancy gear to do mapping for OSM. Sometimes, all you need is a sketchpad, pen and some attention to detail. Here's seav's sketchpad of the Ortigas slice during the Ortigas-Mandaluyong Mapping Party.

Cinemas and Theatres. What are you watching? Cinemas and theatres can provide diversion and entertainment. Some places have thriving tourism economies based on theatre. Other places have numerous jobs for people creating films to ship around the world.

This Project of the Week adds your local cinemas and theatres to the map.

A new RFC ( Request For Comments ) has been published. It aims to add new values to the well defined barrier=*.

Comments are open on the Talk Page.

A new proposition has been made via osm forums.

The second opinion correctness survey proposes to add a tag survey=a date to a feature that has been reviewed by a second mapper where the second mapper has verified the existing, first description. Currently there is no visible information on the quality of data of an object, all data seem equally valid and supported except for the occasional fixme=* tag. When a mapper checks an object on-site, there is not now a formal way for the mapper to state that they have verified the correctness of the details about that object. Likewise, a map user cannot know if an object has been surveyed by multiple mappers.

Please add your comments and remarks on the forum.

Someone asked the ML about creating a partnership between the local OSM group and local authorities. Is there already a working example of this? Are there special permissions to ask about, or are there good arguments to convey the benefits of such a partnership to the authorities?

There are plenty of partnerships already existing between local authorities and OSM. OSM and OSMers can often be be very helpful to authorities. To the benefit of local authorities, OSM provides a low cost mapping service (some small cities can't afford an I.T./Mapping department), and OSMers will correct and improve the map. Some cities are, for example, thinking about managing the tarred surface of their highways, and having accurate and up-to-date maps is essential for this activity.

SteveC launched a thread on the ML trying to quantify the amount of money / number of people depending on or working with OpenStreetMap. Some companies like MapQuest, Stamen or CloudMade base there work on OSM. There are also freelancers and company-employed people working on OSM as part of there jobs. Current estimates of the OSM economy tend to be more than $20 million.

But is it really the goal?

One Feature, One OSM Object

After reading the Good Practice, someone asked if the "One Feature, One OSM Object" rule also applied to a waterway that is also a boundary. There are differing opinions on this: one may duplicate the node and/or way or one may just mix the two. Boundaries can also be included in a relation, in which case the problem of duplication does not arise.

Globally, the "One Feature, One OSM Object" rule tells you that you would not create an area with leisure=pitch and also add a point in the middle for sport=hockey. This would simply duplicate the information, but it provide a nice render. Remember Rule N°1 : "You Shall not Map for the Renderer!"

The craft=* feature has been accepted by mappers.

See the previous osm-CU for details.

A new website based on OSM has shown up. The purpose of "Show Your Journey" (aka Syj) is to let the user trace a route (you can add/delete/move points very easily) and share it. You can also export it as GPX or KML to use it in your favorite software or on your GPS.

This project is under an AGPL license.