From OpenStreetMap Wiki
(Redirected from Key:overtaking:hgv)
Jump to navigation Jump to search
Key:overtaking - Other languages

Using the overtaking=* tag to specify the legal status of overtaking (also known as passing) on a section of road, which may either be indicated by markings on the road or by a traffic sign. Overtaking means to catch up with and move in front of another vehicle or person while traveling in the same direction.

Data consumers should not assume a default value. In the absence of an overtaking=* key, the likely value for a two-lane road depends on the region.

The overtaking restriction should start where a solid centerline begins or at the location of a traffic sign, and not at the location where preliminary notice markings (dashed yellow centerline or "return to own lane" curved arrows) begin. Where the restrictions for both directions change within some tens of meters (as in the example on the right), it is often not necessary to split the way twice but only at their midpoint.

Make sure to cut the way at the beginning and end points of the restriction before applying the tag so that it does not extend beyond the actual stretch of road where the restriction applies. 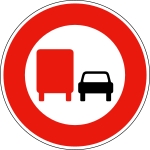 No overtaking in an HGV

For signposted "no overtaking in a hgv" restrictions, the most likely tag to use would be overtaking:hgv=*.

In the United States, overtaking is generally prohibited along roads in urban and suburban areas. In rural areas, overtaking is often allowed along two-lane roads away from intersections, curves, grades, and other obstructions to the line of sight.

Overtaking restrictions are generally indicated by the pattern of the yellow road centerline: a solid line on the driver's side means the driver may not cross the centerline to overtake another vehicle moving in the same direction, whereas a dashed line permits this maneuver. [1][2] In addition,

signs can optionally emphasize the beginning of an overtaking restriction. [3][4] Under normal conditions – i.e., absent an obstruction – overtaking across the centerline is only permitted along two- or three-lane roads but never along a road with four or more lanes. [5] Overtaking may be prohibited at an intersection without any explicit markings. [6]

Do not confuse the overtaking maneuver described here with the following related maneuvers:

See discussion on Talk:Key:overtaking#Default value. There is also a note on history below.

It should be noted that this page was created in 2009, earlier than change=* in 2012. The above has interpreted this tag as passing a moving vehicle by crossing the center line. However, overtaking in the same side, or even the same lane, may possibly be represented by this tag as well, by hindsight application on such signs. This is compared in Proposed_features/change#Examples. Crossing into the opposite side for any reason, viz encroaching into the opposite side for other driving reasons (narrow road, avoiding obstacles, giving space to pedestrians), would also be represented by change=*. In addition, different jurisdictions may have different rules on passing a stopped vehicle, which is to be distinguished from "overtaking" a moving vehicle downstream.