From OpenStreetMap Wiki
(Redirected from Noname and noaddress)
Jump to navigation Jump to search
Qa.poole.ch (QA tool) - Other languages

The main difference to previous implementations and to other tools is that the layers are generated directly from a rendering database updated minutely, in other words the data displayed will short term reflect edits.

The noaddress layer highlights building outlines for buildings that have neither addr:housenumber=*, addr:housename=* or addr:conscriptionnumber=* tagged and don't have a node with such tags inside or on the outline. Further it supports addr:interpolation=* ways that intersects buildings.

The check for a node in or on the building outline is computationally rather expensive leading to the layer not being as fast as the noname one. Zoom 0-12 are regularly re-rendered in batch mode.

Naturally in some areas it is common to not have building specific address information, we are currently missing tagging to suppress such false positives. I'm planning on adding support for some further addr tags that are not so common. If you have any suggestions please leave a comment.

Use a positive list for buildings that likely should have an address instead of the other way around.

landuse residential areas that do not contain addresses are highlighted. Currently this is an all or nothing test, I may add a test for address density in the future. 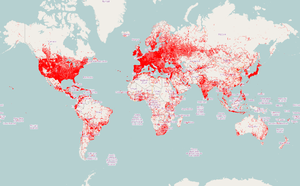 A zoomed out world overview of NoName roads

The NoName map layer highlights roads with no name=* tag. It differs a bit from previous attempts in that it respects noname=* and unsigned=* tags (that have never become popular) and is generated directly from a synchronized database. Currently changes can be expected to show up in roughly 5 minutes.

Displays building and nodes with address information. It uses a similar logic as the noaddress layer however will highlight both a building outline and a address node if such is used on or in the building outline.

The overlay displays streets (residential to motorway, currently ignores *_link) that have access=yes set. While this is not directly an error, it is an indicator for nonsensical access tagging and has undefined semantics, leading to stuff like adding motor_boat=no to streets in a medieval town. It can always be replaced by something simpler and more correct. The tag is most of the time added by JOSM users using the "Road Restriction" preset form.