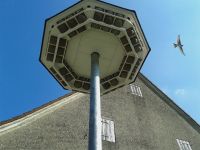 A man_made=nesting_site is man made device equipped with one or multiple nests, serving as an artificial nesting aid for wild animals (mostly birds), compensating the reduction of traditional nesting opportunities. The proposal is motivated by the sighting of swallows towers in Germany.

In German, for naming nestings aids for swallows the terms Schwalbenhaus (swallows house) or Schwalbenturm (swallows tower) are used, as described in Wikipedia. [1]. Nesting aids for common swifts[2] can also be found.

The proposed tagging should be used only for man made, this means artificial nesting aids. It is not intended to be used for any kind of natural nests. It's also not meant for other man made devices that "accidently" carry an animal nest, e.g. like "misused" power towers and chimneys for bird nesting.

The tagging is quite generalized, so it may be used for other species' (not birds) nesting aids, too. But primarily, this proposal is meant for man made bird nesting sites.

A couple of nesting sites have already been mapped in different ways:

None of the used tagging methods seems to be fully appropriate to tag a nesting site in general. So, a new tag is proposed to be introduced. 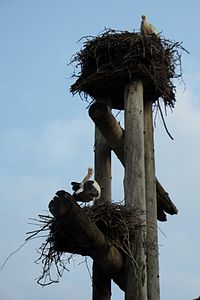 A single node can be used in this case 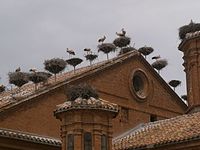 Many single nodes or an area may be used here

For mapping the nesting site itself, the tag man_made=nesting_site should be used. 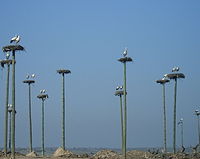 Optionally, a support=* can be given to tell about the mounting of the nesting site, e.g. a pole or a wall.

Then, the nesting site may be optionally specialized for the species, using species=*. 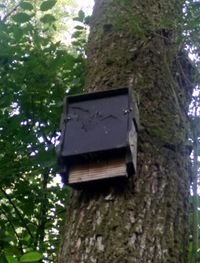 Additionally, a capacity=* can be given, as nesting sites with a different number of nests have been sighted. 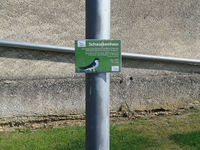 Plate fixed at the mast 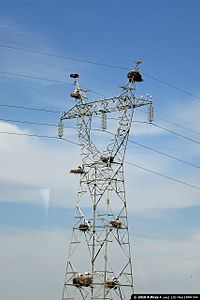 "Misused" towers should not be tagged as nesting sites.

Here is the summarized proposed tagging:

As type a node or an area can be used. Node will fit best for single nesting sites. Area fits well, if a conglomerate of nesting sites has been deployed.

Here's an example for a nesting colony mounted on a pole:

For a wall mounted nesting site a proper adaption may be:

As already stated in the rationale above, man_made=nesting_site should only be used for artificial nesting aids. Please think about possible consequences (e.g. vandalism) when tagging a nesting site. Use the following rules as a guideline:

These guidelines are based on common mapping ethics. Please also refer to the many discussions about this topic.

The agricultural and environmental analysis company AGROFOR specialized on manufacturing swallows towers as nesting sites. The company states that around 300 of their masts have been deployed to date.[3]

The German newspaper Südwestpresse constitutes that some villages in southern Germany mounted swallows towers, and that another 20 towers are scheduled to be erected.[4]

It was approved with 26 votes for and 1 vote against.

I don't share your preoccupation because this is a tag for man made nesting sites, not for natural bird nests without human intervention. Using this tag for the latter would be misuse of the tag against the definition. --Dieterdreist (talk) 20:43, 30 December 2016 (UTC)