This tag is intended for do it yourself standalone repair stations which are typically located outside and open 24/7.

To map a bicycle repair service (which is operated by a repairman), use shop=bicycle + service:bicycle:repair=yes instead.

For stand-alone bicycle pumps, the tag amenity=compressed_air is sometimes used.

If a repair station is not tagged with a key from the above list, it means that its status is unknown: for instance, if a repair station shop does not have a service:bicycle:pump=* tag, nothing has been stated about availability of the bicycle pump. 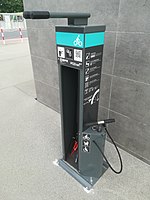