Great, thanks for putting this and the RFC together. I agree with you in most ways, however I don't think this proposal should preclude other types of mapping, such as mapping the road with sidewalk=*, as proposed with Proposed features/Sidewalk. Doing so will foment opposition, and I believe they can coexist; those who desire finer detail can use this scheme, and otherwise can use that scheme. -- Joshdoe 20:35, 24 March 2011 (UTC)

This generally is a good proposal (I'm interpreting the section on "Relation" as optional, and would oppose requiring it). I was about to propose something very similar and then discovered the current activity. The footway=crossing feature is extremely important. As I understand the present (prior to this proposal) tagging system for highway=footway, when the footway crosses a street, the "way" is to be tagged as highway=footway, and then the node where it intersects the street is to be tagged as highway=crossing, and then the characteristics of the crossing (types of markings, controls, access) are tagged onto the node, not the way. This creates two problems, which the footway=crossing addition fixes. First, if you have a crosswalk going across an 8-lane intersection (alas, Florida is full of these, and worse) then, when drawing a map, it becomes appropriate to distinguish the crosswalk segment from the sidewalk segment. But if the crosswalk segment is not tagged separately, you have to go find the highway=crossing node, pull the crosswalk information off of it, and then somehow attach it to the way(s) intersecting at the node. There is a lot of variation in how these ways are entered, and this becomes a mess. Second, most routing algorithms are "edge" (way) based. They use data recorded on ways, not on nodes, to find a route through a network. So to use the data about the highway=crossing node in most routers, you have to again find it and assign it to the edges, and again it can become a mess. The proposal here would let you find the crossing way easily, alert you that it should have a crossing node, and then you can pull the data out of the node and assign it to the way for either mapping or routing. If this proposal passes, I will happily re-tag the many crosswalks I've coded to be consistent it.--EdH 12:36, 25 March 2011 (UTC)

This is a terrible idea

Mapping sidewalks as separate ways is a terrible idea. Imagine the complexity of a four-way intersection between double laned roads with sidewalks and cycletracks along each direction. It will be a nightmare of complexity getting the routing done correctly. It's much, MUCH better to tag sidewalks onto the road itself. Sidewalks are a property of the road, and routing will work without mappers doing anything special. What we **really** need is a highway=city_street type, that includes sidewalks as a default. mok0 17:19 10 April 2011 (UTC).

This is not an exclusive mapping method. You can map sidewalks as tags on the main road; but in my opinion (and that of some others too), mapping them as separate ways can give more details. But you're not forced to do it. --Hanska 07:42, 12 April 2011 (BST)

I agree that this feature sounds like adding more complexity without a major benefit. Technically spoken it may be ok even... --amai 21:30, 15 April 2011 (BST)

actually the situation is the other way around. if possible, you should always map features where they actually are and not by approximation. in this case side tags to a street would be unusable in case of routing programs for blind people. they need to know the exact location of the path all the time. tagging features to a road should only be the fallback solution in case there are no good gps tracks or no satellite images available. also mapping paths as tags to a street is biased towards car drivers. someone who uses a bicycle all the time could argue the other way around, that car specific properties should be added to cycleways --Flaimo 12:36, 28 April 2011 (BST)

Would be nice to include the alternative (exitsing) mapping methods into the proposal with the important comment that they are not obsoleted by this proposal. --grin ✎ 09:49, 12 April 2011 (BST)

It perhaps could be more obvious, but the page does say: "Proposed features/Sidewalk - a different but not necessarily conflicting way to tag sidewalks (please discuss on the talk pages" -- Joshdoe 16:51, 13 April 2011 (BST)

I think kerb=lowered may be the better tag to use than the sloped_kerb option - proposal here: Proposed_features/kerb --Pobice 09:20, 12 April 2011 (BST)

That's a whole different story :) -- those are additional tags, which may be changed following other proposals. Please focus on this one --Hanska 09:45, 12 April 2011 (BST)

A sidewalk is a footway

Quote "You would have to change the meaning of highway=footway to get sidewalk into a subgroup of it.". Which meaning is that? Some German mistranslation from the history? (Just that both users with this notion say their mother tongue is Deutsch. A sidewalk looks like a footway, it's used like a footway and the allowed users are the same as on any other footway (see duck test). Alv 15:46, 12 April 2011 (BST)

* All renderers will get broken and have to be fixed in favour of having sidewalks rendered right a way but wrong as there is no difference between footways and sidewalks. If you do not use highway=* only renderers that want to show sidewalks have to be changed.--Skyper 13:16, 17 April 2011 (BST)

A highway is a separated way, and sidewalks are separated from the road by at least a kerb=* (curb) if not grass or other surfaces. Raised kerbs are just as much a barrier to those in wheelchairs as a median (divided highway) is to cars. Also I've used this tag extensively already, and there is no such issue with rendering. It doesn't break any renderers that I know of, as you can see here on OSM.org] and on Open.Mapquest.com. -- Joshdoe 19:21, 17 April 2011 (BST)

Maybe this image will help others understand this a bit more. 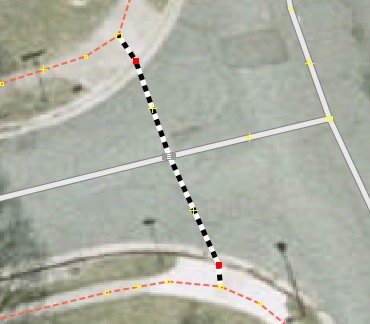 Looking at the area this looks like it will cause more problems than it solves - lots of now un-routable sidewalks. I'm still not convinced that this is better than sidewalk=left/right/both/none for the majority of cases. --Pobice 23:05, 18 April 2011 (BST)

What do you mean by un-routable sidewalks? Please give specifics. I've had very good results with Open.MapQuest.com for generating walking directions which follow the sidewalks. With the sidewalk=left/right/both/none method, how do you indicate the presence or absence of wheelchair accessible kerbs? And how about tactile_paving=*? -- Joshdoe 23:52, 18 April 2011 (BST)

Some examples of missing connecting bits: the path (please, please, always tag the allowed users if using path) ending at the sidewalk here, just north of the example picture, should connect to the way depicting the road; The dead ends of sidewalks, such as this surely allow stepping from, and onto the road (at least when crossing that road). Just incomplete data. Alv 06:59, 19 April 2011 (BST)

As for allowed users, I'd say it's open to any non-motorized vehicles, which is exactly what the highway=path page says is the default access ("open to all non-motorized vehicles, but emergency vehicles are allowed"), but since there are no signs, it seems like maybe anything could go. As for the first node you mentioned, I didn't connect it to the road because there is no lowered kerb there; you'll notice that just to the north and south of it I did map two driveways which will allow access to any wheeled vehicle, and it seems like adding yet a third path (with kerb=raised, wheelchair=no) is just unnecessary. As for the second node, I'm not sure what is to be gained by adding such a connection off the sidewalk (again with kerb=raised, wheelchair=no)), since there are two ways to get on/off the road within a few dozen meters. I've generally taken the approach to only add such non-wheelchair accessible connecting ways when there are no wheelchair accessible ways "nearby". However if someone else wishes to add them I won't complain about it. -- Joshdoe 14:18, 19 April 2011 (BST)

With all the different interpretations of what people thought they were voting on, the lowest common denominator of highway=path is too vague for it to be useful without extra tags. Alv 07:31, 26 April 2011 (BST)

Surely this example makes pedestrian routing even more complex than having the appropriate tags on the road way. You have tagged one unmarked crossing, but if you can cross at any point along the whole street you really need an awful lot more. -- EdLoach 15:34, 19 April 2011 (BST)

You seem to be focused on able-bodied pedestrians, but what about those who have difficulty traversing raised kerbs such as the elderly, those in wheelchairs, and those with strollers? I've had no difficulty with routing using Open.MapQuest.com. If there's a significant stretch of sidewalk that doesn't have a proper crossing, I'll add a connecting way marked as wheelchair=no. If you notice in several places I've added driveways, which provide for a wheelchair accessible route. This is all an argument over what is easier to map and/or route versus what's more accurate. Personally I believe it's more important to have an accurate representation of reality. I don't see what's the big deal with routing a pedestrian 20 or 40m further to cross at a proper crosswalk. -- Joshdoe 16:01, 19 April 2011 (BST)

I think you are solving problems that have already been solved. Mapping crossings in 99% of case is as simple as placing a node at the crossing point. You can then add kerb, tactile paving, wheek chair access etc. Remember most of us don't have access to high res imagery to micromap on this level.--Pobice 18:41, 19 April 2011 (BST)

We may also need to consider marking the roads somehow where sidewalks are mapped like this. --Pobice 18:36, 19 April 2011 (BST)

While mapping sidewalks using this scheme, I thought that adding foot=no to the accompanying street might make sense. At least in Italy, a pedestrian must use the sidewalk, if present, otherwise he can also get fined by policemen. I don't know how this is handled elsewhere in the world, but at least it works for the routers. Sure, we should make sure that foot=no is dropped as soon as the sidewalk connects to the road (in the case of an uncompleted/partial sidewalk). This works beatifully with routing (I tried mapquest). --Hanska 20:05, 25 April 2011 (BST)

I've created a Sidewalk article, which summarizes and links to this and other sidewalk related proposals. I've tried to be unbiased, by detailing the advantages and disadvantages of each method, but please feel free to correct any biases you see. -- Joshdoe 16:27, 19 April 2011 (BST)