What about faces=*, for example some clocks on pillars or poles have three or (like Example 1, overleaf) four faces. Andy Mabbett (User:Pigsonthewing); Andy's talk; Andy's edits 23:05, 21 November 2011 (UTC)

The flowers are the material of which the clock is made, not the display type of the clock. So, it would still be display=analogue, but you could add material=floral. --Pbb (talk) 07:57, 31 August 2015 (UTC)

What about disused clocks?

amenity=clock seems like a useful thing to have, but there's one problem I can see: what about disused clocks? Is this useful information to even bother collecting (hey, if disused train stations, which aren't publicly accessible is in OSM, I don't see why disused clocks, which are publicly viewable shouldn't be). If we're gonna tag them, is there a way to do so?

A few I can think of:

One potential use for collecting this information is actually to enable people to lobby local authorities and others responsible for maintaining public clocks to fix the clocks and get them going again. Tom Morris 09:53, 7 June 2012 (BST)

I guess disused=* and/or abandoned=* could be used for this purpose. AlfonZ 10:29, 7 June 2012 (BST)
[ec]Hey, at least they're right twice a day! Seriously, good point. Also worth remembering that clocks are still landmarks, even if stopped. There was a website which listed them, stoppedclocks.com, but without coordinates. Also, It seems to have gone AWOL. (Archive.net has a snapshot) - two good reasons why such things are best mapped in OSM. Andy Mabbett (User:Pigsonthewing); Andy's talk; Andy's edits 11:17, 7 June 2012 (BST)

Update The Stopped clocks site is still live, at http://moblog.net/stopped/ (and should be back at the former address, once a bug is fixed). Andy Mabbett (User:Pigsonthewing); Andy's talk; Andy's edits 12:09, 7 June 2012 (BST)
Update Alfie here from the stopped clocks project. The moblog where all the clocks are posted (over 300 in the UK so far) are in the main also located using Google Streetmap, with the lat/long accessible on the map page here: view-source:http://moblog.net/map/blog/stopped/ - hope this is helpful!

The suggested display=* value analog is American English. In British English, which we use for our tags, this should be analogue.-- Dieterdreist (talk) 11:52, 17 September 2014 (UTC)

+1 for me too. The usage stats are not a guideline, because everybody who has no bias will just copy the value from the wiki. Consistency is important, and OSM follows UK English conventions, not US. (See also Highways, Sidewalks and Key:level.)--Pbb (talk) 08:07, 31 August 2015 (UTC)

Currently I am using lit=* for clocks which are lit during the nighttime. 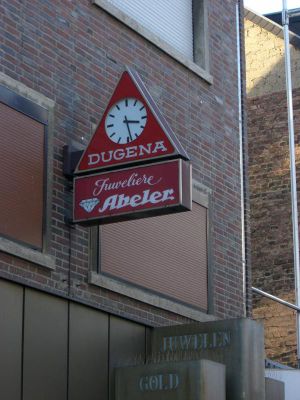 Face parallel to the wall

How to express that the clock shows the level of radiation? 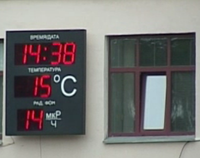 What about clock towers? My initial supposition was to tag both building=yes and amenity=clock but it's not supposed to be used on an area. Technically the clock is wall-mounted but also technically there's four clocks. Except that in the case of, for example, Big Ben, the same internal mechanism drives them all. It's both a building and a clock.

@Herrshuster: That's only how it is proposed. I don't see a reason why it couldn't be used on areas. You can use https://taginfo.openstreetmap.org/compare/man_made=tower/tower:type=clock. However, there's not "four clocks", but 4 clock faces. Use faces=*. -- Kovposch (talk) 09:42, 25 February 2020 (UTC)

Some clocks might be many meters wide sundials. So consider allowing areas as well as points. Jidanni (talk) 00:08, 30 April 2020 (UTC)