natural=volcano or something like that will be much better than amenity, actually, think natural=volcano indicates it is a peak as well, but render it with a slightly different color. --Skippern 17:17, 17 December 2008 (UTC)

What about man-made hills (such as slap heaps, or artificial hills in parks)? Should they also be tagged natural=peak? Obviously "natural=" does not really fit here. On the other hand, for a map it's not really relevant whether an elevation is natural or not, since in practice they may look the same. -- Sleske 23:20, 25 July 2010 (UTC)

I guess there should be used man_made=peak tag. It is very rare up to this moment, but it would be good to start using it more. Moreover definition of natural=peak is so short and broad, that we may add more specific tag, at least "peak=mountain" and "peak=hill", to differentiate it from other uses. You can examine how it is used in Berlin for example. -- Kocio (talk) 17:41, 24 June 2014 (UTC)

In mining regions you will find far more "man_made" peaks than "natural" ones. After WWII German cities often got hills made of debris after the air raids that are very prominent peaks. Some "peaks" in Northern Germany are actually tumulus, but the knowledge about their origin is not widespread. I never saw a map distinguishing between natural and man made hills and I don't think either it is wise, because a map should show what there actually is. If somebody feels it's important, he/she could add peak-type=natural|man_made? --GerdHH (talk) 12:07, 20 May 2017 (UTC)

Yes sure, between the comment in 2014 and yours, the definition had been refined already after discussion on the tagging list, and includes "natural + renaturalised features". Please also note that "peak" does not map the hill, it maps the highest point. Thus while the hill could be man made, the peak is immaterial and not "made".--Polarbear w (talk) 13:44, 20 May 2017 (UTC)

The natural=* is for both 'natural' and 'unnatural'! See teh description " including ones that have been modified by humans. '. It is a poorly named key. If this idiocy is to be removed then I would suggest splitting the values into actual objects such as 'landform' (peaks, saddles etc), landcover (rock, sand, trees etc). Warin61 (talk) 22:00, 22 January 2020 (UTC)

I think there should be some way of specifying the importance of a peak, because certain peaks are very important and well known (the highest point of each mountain, for instance), while others are hardly known.. some tag to define 2 or 3 levels of priprity, so that certain peaks render with name at low zoom levels, while others render only at higher zooms.. --Snaggy89 13:25, 31 January 2011 (UTC)

I don't like the suggested summit:* keys at all.

summit:register=yes is ambiguous, it is semantically not obvious if it means the logbook on the summit, or that the summit is registered somewhere. Within the climbing namespace, climbing:summit_log=yes has been established, which is clearly related to the activity being logged. --Polarbear w (talk) 09:11, 8 October 2015 (UTC)

A peak is not always equivalent to a mountain, there are sometimes mountains with multiple peaks! Recently I learnt about a mountain called Trzy Kopki ("Three Heaps"), which has three separate, distanced peaks, none of which is considered a "main" one. The peaks with their elevations are on the map already, but how to show that they all belong to one named mountain?

Don't go for a separate tag that would count as duplication for a very particular case. If you think it's an ensemble of peaks gathered for one mountain name, you can use the tag, natural=mountain_range, it does correspond to the definiton. Another solution is to create a relation with the type=site tag and the other applicable common tags (type=site, name, description, etc...) related to the 3 different peaks each having its own ele key. Do not put the name on each peak, that would be misleading for search requests.--SHARCRASH (talk) 13:25, 25 June 2020 (UTC)

The more common tag to map a mountain is natural=ridge if the mountain has a single main ridge-line. The tag natural=mountain_range is usually for a larger feature which consists of multiple named peaks and ridges, often 10 km or more long. --Jeisenbe (talk) 17:39, 25 June 2020 (UTC)

There is currently no clear differentiation between natural=rock and natural=peak. The example pictures on the rock page indicate insignifcant rocks, not forming a peak in the landscape. Rock as a material is a constituent of mountains, thus a significant elevation should not be tagged as natural=rock just because it is formed by rock.

Thus I propose to tag a rocky structure as natural=peak if it fulfils certain significance criteria, which can be:

In particular, these criteria would be fulfilled for the climbing rocks in the Saxon Switzerland, Germany. --Polarbear w (talk) 10:37, 7 October 2015 (UTC)

It is absolutely clear. natural=rock maps to one specific physical object (see the wiki page for images), and natural=peak maps to the highest point of the plateau/mountain (which is immaterial). A lone climbing rock like https://en.wikipedia.org/wiki/Big_Rock_(glacial_erratic) alone would not justify a natural=peak, while at the same time calling for a closed way with natural=scree and natural=cliff. —Jengelh (talk) 12:01, 7 October 2015 (UTC)

From this perspective, I would draw the rock as an area, and add its highest point as immaterial peak.--Polarbear w (talk) 12:44, 7 October 2015 (UTC)

Personally, I would not get the idea to mark those as unitary rocks, already because the surrounding area is all rocky (and therefore natural=scree or so in OSM, together with the cliff, as previously mentioned). So I would say it is a bunch of peaks (Bloßstock, Kreuzturm, Morsche Zinne as per the Wikipedia article). The government-kept map (geoviewer.sachsen.de) also happens to show them decidecly as peaks. –Jengelh (talk) 12:56, 7 October 2015 (UTC)

Not all mountains or hill have peaks. 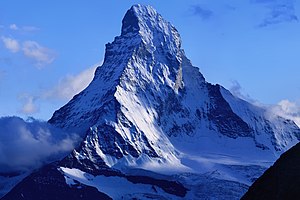 A round mountain top.

A mountain may have a rounded top e.g. highest mountain in Australia, Mt Kosciusko, is a 'bump' in the landscape of bumps. It is hardly a peak. When viewed form one direction the apparent top may be a rise that is displaced from the true top. Warin61 (talk) 01:09, 21 April 2019 (UTC)

That's incorrect. In OpenStreetMap, all mountains and all hills will have at least one natural=peak point, though generally they are only mapped if the name or elevation is known.
In topography, a peak is a point that is higher than all immediately surrounding land. In OpenStreetMap, the tag natural=peak is used for the high point of any hill or mountain, including small peaks along ridges. See https://en.wikipedia.org/wiki/Summit "A summit is a point on a surface that is higher in elevation than all points immediately adjacent to it. The topographic terms acme, apex, peak (mountain peak), and zenith are synonymous."
In OpenStreetMap this tag has always been defined as "The top (summit) of a hill or mountain" since 2008: https://wiki.openstreetmap.org/w/index.php?title=Tag:natural%3Dpeak&oldid=151052 --Jeisenbe (talk) 16:01, 3 May 2020 (UTC)

Some maps have an e.g., "X 813" on each unnamed (813 m high) hill summit. One might think "What is the need for that? I can tell from (cyclemap) contours." Well, sometimes you can't, as the contours aren't dense enough to tell where the actual peak is, hence the X's on the map. Anyway my point is it is great for the map to be enriched with these unnamed peaks. (and their elevations. Even if there are DEMs to be had.) Jidanni (talk) 11:02, 3 May 2020 (UTC)