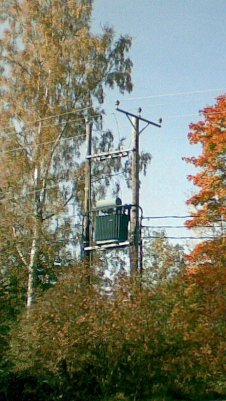 The unit in the image on the right which is about the size of a dishwasher or two and consists of individual transformers up on the wooden poles are not to be under power=sub_station? By the German example pictures (DE:Tag:power=sub_station#Beispiele) they seem to, though. Should we use power=transformer instead? Alv 15:10, 28 October 2008 (UTC)

Of course you should. There's no need to have a substation to find transformers. Relatively to the photo, the trick is to put two nodes, first with power=pole and second with power=transformer because you couln't have one only node with both power values. Fanfouer 11:22, 24 January 2013 (UTC)

An electrical substation is a place where the voltage is transformed. It is not a "small" electrical station. It's name comes from the times when every power plant had one power line and one substation. The substation was a logical part (or child) of it's power plant. Now we have a grid, so the name has no sense. The only logical thing is to delete one of the two tags. unsigned comment by User:Janko

From my understanding of how things have been mapped in the past the power=station is used for large stations that transform high voltage to high voltage (e.g. 380kV to 110kV) or act as switchgears. The power=sub_station is used for small transformer stations that transform high voltage (e.g. 20kV) to low voltage (as used in the houses). From the sub station the cables can run thru a power=cable_distribution_cabinet from which they go into the houses. -- LosHawlos 16:17, 23 May 2011 (BST)

I certainly read somewhere that what OSM calls a 'power station' is a larger version of a 'sub-station' which is what I reflected in the articles. I really don't mind what term we use for what, but lets at least create a wiki that is consistent and has a clear description of the difference between a 'station', 'substation' and a 'transformer'. The subject is confusing because in British English a power station is a generation plant (in OSM power=generator) and a substation is where electrical voltage is converted. Certainly one of substation and station seems to be redundant. To help with the discussion, I have created maps on ITO Map for electrical distribution, electrical generation and in order to help with this discussion, also Electrical power conversion (this last one does not appear in the drop-down list of layers as it is of very specialist interest). For this last map red is for 'station', green is for 'sub-station' and blue for 'transformer'. PeterIto 18:34, 23 May 2011 (BST)

I like this idea. It is much better to identify substations with their type (substation=*) and their voltage voltage=*, instead of having 2 keys for the same thing. However, is your Electrical power conversion link still working ? I cannot access it, the website asks me to select a layer from the right-hand menu. --Don-vip 01:23, 27 May 2011 (BST)

power=station and other values are going to be deprecated. power=sub_station will become the only valid value to tag places where power is switched or transformed. Fanfouer 11:22, 24 January 2013 (UTC)