From April 25 to June 8 2015, a significant crowdsourcing effort of the OSM community with more than 7,500 contributors from around the world supported the logistic of the Nepal government, UN Agencies and International organizations responding the Nepal Earthquake human relief.

Thanks to the various organizations that supported us, including the Aerial imagery providers, the Mapathon organizers and other Digital Humanitarian Organzations that worked closely with us to monitor the situation.

This Activation is now closed.

The Humanitarian OpenStreetMap Team Coordination volunteers and the Kathmandu Living Labs (KLL) Volunteers conjointly assured identification of mapping needs and interfaced with the various humanitarian organizations that responded to the Nepal population needs in Kathmandu and the remote villages in the mountains. KLL also interfaced with the Nepal government and provided various services to the teams arriving in Kathmandu.

Roads and buildings were rapidly mapped with the remote support of the OpenStreetMap community from around the world. From post-disaster imagery, Spontaneous camps were located in Kathmandu. Potential helicopter landing areas in the mountains were also identified. The various mapping services offered are described below.

OpenStreetMap offers an online map and spatial database that is updated by the minute. Various online maps are based on OpenStreetMap, including Navigation tools such as OSRM. Tools and services allow data extracts for GIS specialists, routable data for Garmin GPS, GPS navigation with smartphones and other device-compatible downloads. With an Internet connection, regular syncing is possible, because there is open access to the community-contributed data as it comes in. Also bulk with downloads of OpenStreetMap data are ideal for use offline. In addition, maps can be printed to paper, if needed. 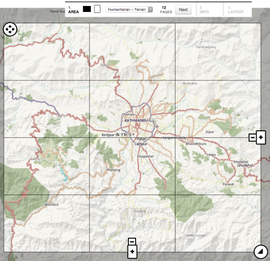 Browse the Activation Area to get a feel for the data that is currently available. Different map styles, including a special Humanitarian style, can be selected on the right side of the screen. Though some data may not render (appear) on the online map, it can be exported from the underlying database for other uses requiring more detail (See export section below).

Large poster-size maps and letter-size paper atlases of custom areas can be printed:

There is more than one source for the same file format. This should assure a constant access to data if any problems arise from one host. 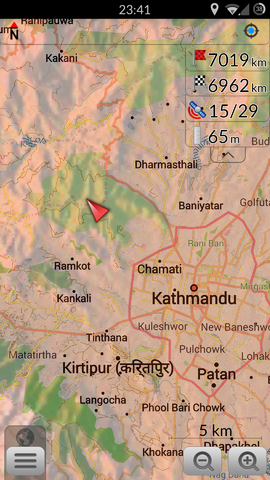 OSMAnd on Android, Offline Maps & Navigation
Use on your phone or tablet (no network connection required).

How You Can Contribute 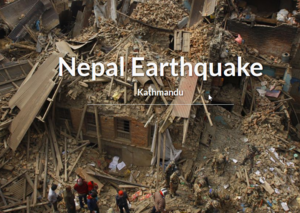 The following projects have been set-up on the OSM Tasking Manager. The complete list of HOT projects for this 2015 Nepal event are all listed (alongside others) on http://tasks.hotosm.org/ : 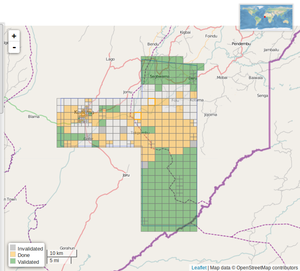 » OSM Tasking Manager How to

Overview of tasks and imagery coverage on uMap

As well as small square shaped contributions, we can look to make more wide ranging improvements. Reviewing/improving the overall map data consistency is very useful, but that is also most prone to edit conflicts so please save often and understand in the busy time like this you might encounter edit conflicts.

Any local knowledge like infrastructure, buildings or road names that you know and can positively identify, are extremely helpful to responding organizations.

Mapping roads is a high priority, the Nepal roads page for proposed road conventions or guidelines for road categorization is a good reference.

OpenStreetMap is a editable map, so we can improve it if there's anything missing/wrong (Beginners' guide). This is particularly useful if you have any local knowledge or you can survey things on-the-ground (names of streets etc.).

People who have local knowledge but do not know how to edit OpenStreetMap are still vital to our aid efforts. You can share your local knowledge with the OpenStreetMap "Notes" feature. This lets you drop a marker and attach a note with information about the location/building/road that an experienced OSM mapper will then put in the OSM database. For simple instructions on how to share your knowledge with our mappers please see this quick guide to using notes:

How to easily share local knowledge with OSM Notes

Fresh and archive satellite imagery is being requested through international activations charter and imagery providers. HOT has identified areas that need high resolution imagery for both base mapping and damage assessment. Areas requested are highlighted in bright blue on this map:

For some of TM #1001 the Bing imagery may be cloudy or unavailable, MapBox has coverage, but not at all zoom levels.

There are two sets of public domain topographic maps available which cover large portions of Nepal. Both sets are 1:250,000 scale, which means they are only really useful for adding place names, of which the maps list thousands. Before we manually copy in place names from these maps we will manually merge in the GNS place names for the area, which will cut down on some of the work. After that is done, we will create task manager jobs to go through and systematically enter all of the place names on these topographic maps.

Write-ups and in the News