Why to map this area

Mapping status of Batangas City is divided by barangay, except for the barangays in Poblacion, which is collectively referred to as Poblacion. Rural areas are of mostly low priority, but mapping is mostly concentrated in woodland and residential areas 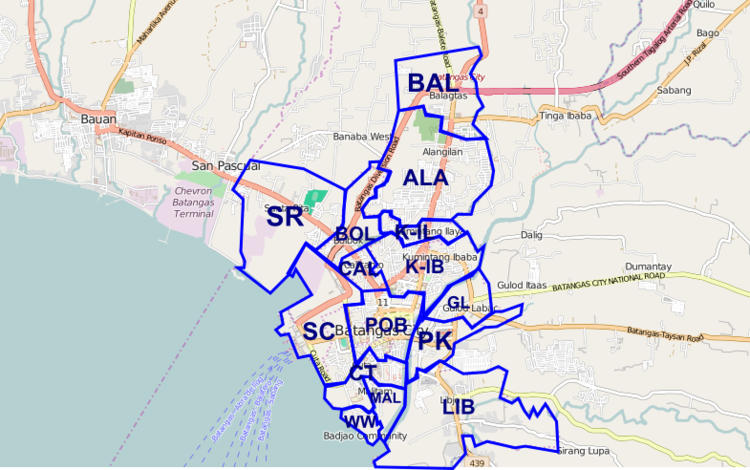 The city map, particularly those in the Poblacion, has became more detailed given various mapping projects that added buildings and critical points of interests. Now, the city map looks very great, but fixes for navigation, missing street names, and additional POI's are one of a few tasks that should be done to keep map up to date. Fixing of erroneous mapping is an ongoing task, particularly those under the previous LGU-led mapping efforts.

Progress in Poblacion by numbered barangay

The current city boundary is lately mapped as this relation:6185647

The Poblacion (city proper or downtown), divided into smaller numbered barangays, is mapped as this boundary:6309134

The barangays forming the Poblacion (see boundary above), are mapped as these relations:

Current sitios with boundaries mapped are as follows:

Barangays, and sitios/puroks and subdivisions

The first barangays of Batangas City are mostly mapped from local knowledge and surveys, but others are based on data added by Batangas City LGU employees on one mapping project from March and April 2017. Barangays on the Poblacion area are under "Poblacion", instead of being listed individually. Sitios/puroks mapped may or may not be officially designated by the barangays (those officially designated may have a sign placed by the barangays, but named areas used by locals in speech may need to be verified, especially those lacking signed evidence of official recognition by the barangay). Subdivisions/residential areas, though preferably mapped as land use rather than a node (some designated by barangays as sitios), are considered divisions of the barangays, and are also included.

Though still not having the high-rises and skyscrapers Metro Manila has now, 3D mapping is being introduced to the city, for 3D renderings of the city

Current work in 3D mapping is particularly in Poblacion. One main job is tagging the number of storeys or heights of buildings, basing on local knowledge, surveys, and photos. 3D tags, under the Simple 3D buildings scheme, are added after, basing also on aerial imagery (particularly those that are too high) and local knowledge, survey and photos (for building colors, also for roof details where they are easily visible).

Current detailed 3D mapping efforts are being done on this places:

United Church of Christ in the Philippines