Why map power infrastructure in the Philippines?

Aside from being an ubiquitous sight, even on urban aread, power lines are very important infrastructure, and imagine where the power we use come from, that is, power plants, and flows into our houses, businesses, and factories via transmission, subtransmission, and distribution lines. Also, power lines are not mapped in detail in most of the Philippines, except in the majority of Luzon, which has a large grid, and on OpenStreetMap, even major transmission lines are missing, especially in most of Visayas and Mindanao, which have grid systems also.

What interests me is Meralco's 115 kV subtransmission system, which are a large network serving substations and some large industrial customers around Metro Manila, Rizal, southern Bulacan, Laguna, and Cavite. It is composed of mostly roadside lines, placed on tall wood, concrete, or steel poles, with heights of 21 to 32 meters and usually shared by the distribution feeders. And mostly placed on major roads, these may serve as a guide or landmark, though in scenic areas, these are making the view cluttered. The lines of Meralco's subtransmission network are not very much mapped, unlike NGCP's 230 kV transmission lines traversing Metro Manila. and mostly looked upon like the lines placed on smaller poles, (usually rising at 13.5 to 15 meters), though they are energized at 115,000 volts, placed on poles with taller heights (21, 27.5 or 32 meters), and sometimes, double-bundled to carry the same power an unbundled single-circuit 230,000 volts line transmits.

More info about power line voltages can be seen at Classification of Powerlines.

Lines mapped, to be mapped, and still being mapped

Meralco, or Manila Electric Company which distributes electricity in Metro Manila and nearby provinces, operates a subtransmission system composed of lines between large transmission substations and distribution substations on areas it serves. Sub-transmission lines operated by Meralco are typically mounted on tall poles and are roadside for easy access by work vehicles, but a few run on allocated right-of-way, and mounted on both towers and poles. The voltage of subtransmission lines operated by Meralco are typically 115,000 volts, but 69,000 volts in a few places, like in Batangas City and northern Bulacan.

Most of this lines are found in areas served by Meralco where the sub-transmission grid voltage is 69,000 volts (69 kV), like in Batangas City and parts of Bulacan (Malolos, Calumpit, San Rafael, San Miguel)

The National Grid Corporation of the Philippines (website: ngcp.ph), also known as NGCP, operates the main power grid that carries electricity from power plants to substations, before distribution to electric utility companies, like Meralco, Davao Light, and Visayas Electric Company, and provincial electric cooperatives. NGCP is formed as a private company given by the government-owned National Transmission Corporation (Transco) a 50-year concession to operate and develop the Philippine power grid. The transmission lines owned by NGCP have voltages of 115,000 volts DC, 138,000 volts AC, 230,000 volts AC, and 500,000 volts AC, but one line, the HVDC Leyte-Luzon, carries ±350,000 volts DC. NGCP also operates a subtransmission system, typically 69,000 volts, that brings electricity to cooperative/utility owned substations, although cooperatives/utilities may own and operate their own subtransmission lines, mostly constructed by themselves or divested from NGCP. NGCP's power grid is divided into three grids, the Luzon Grid, Visayas Grid, and Mindanao Grid, with only the former two interconnected, via the HVDC Leyte-Luzon, but as part of its plan, additional links between the three grids are being proposed and constructed.

Transmission tower designs may be tagged using the design=* tag

This section shows renderings of some electric substations in the Philippines using Maperitive rules (made by polderrunner). 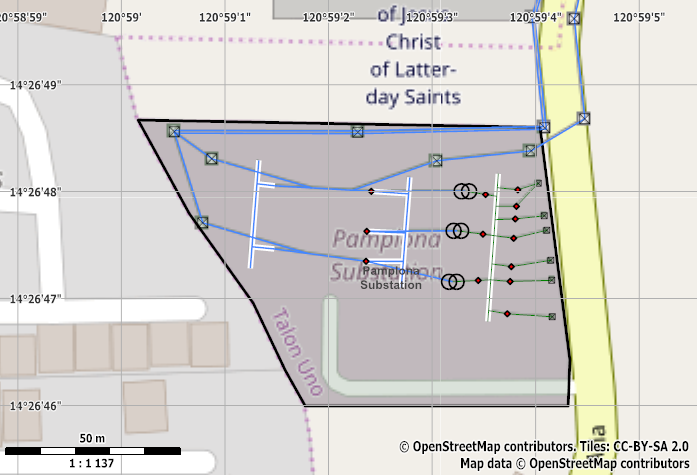 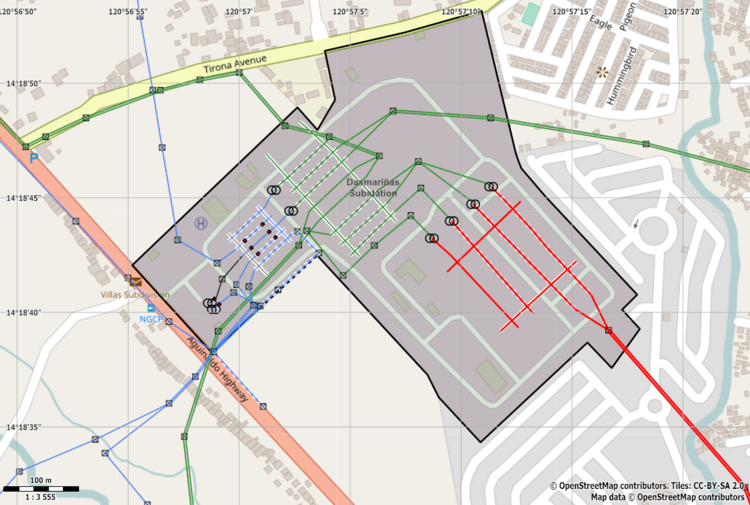 This section shows renderings of the grid network in the Philippines (including sub-transmission networks owned by the National Grid Corporation of the Philippine and electric companies/cooperatives) using Maperitive rules (made by polderrunner). But, maps here will be divided in the province level