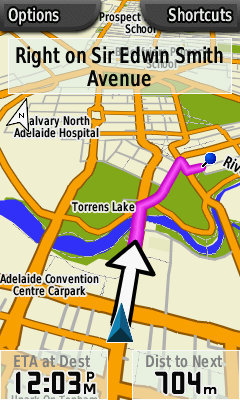 Some people have done the work of creating Garmin maps for parts of the globe. You can download these files and put them straight onto your device.

Creating your own maps from OSM data

These are generally the steps involved (also see the Software section above):

If you are interested on building the map for a single country on a windows machine, User:GPS-Marco provides a software package collecting all the needed tools and a script that executes all the above steps with a simple double click. The script relies on the download.geofabrik.de server for OSM data downloading: you can check there for the list of available countries. The script generates a compiled map (gmapsupp.img) that is up-to-date, is routable (optimized for motor vehicles) and is ready to be uploaded on a Garmin GPS. A .reg file will be also generated for a simplified MapSource installation.

osm2gmap is a command-line utility, created by User:Jsl for creating maps of a single country from Geofabrik data. It works on Mac OS X and Linux systems, and automates the retrieval of map data, splitter, mkgmap, gmapi-builder, and creates a map with default options for use on Garmin devices and in Basecamp.

How to assemble your own map

User:Computerteddy provides weekly updated tiles for the whole world which are available for download (1 GB archive of all tiles, access to gzipped single tiles). These can be combined to a Garmin gmapsupp.img using the free sendmap program (download).

Creating your own topographic maps

See the dedicated page on topographic maps for garmin devices.

Installing the map onto your GPS

The following example describes how to copy the file in Linux:

Note that the installed map(s) show up at "tools / settings / map / map info" from which you need to select the new map over the Garmin base map.

Note also that you may need to install the gmapsupp.img file(s) on your GPS unit's SD card (if it has one). (At least on one Nuvi 1490 maps installed on the device's Garmin folder did not show up in the "map info" view.

Installing using sendmap: If your GPS doesn't support USB mass storage mode you may have to use sendmap or other proprietary software to transfer it to the device.

Using MapSource: Alternatively you can Load your map into Garmin's Mapping program MapSource and download it from there. Instructions for installing your map in MapSource are here OSM Map On MapSource Once the maps are installed in MapSource select the map function in the tools menu. Then highlight all the maps you want to download. you can change between different mapsets while doing this. Then choose the "send to device" function. This will Overwrite the existing map files (except the Garmin base map).

What if I have an existing gmapsupp.img file?

Some Garmin devices/applications support more than one img file. Try renaming your OpenStreetMap .img file to a different name like gmapsup2.img or gmapprom.img.

When multiple ".img" files are installed, it is difficult to differentiate them in the on-device menu when they all have the default "OSM Street Map" (or similar) name set in the ".img" file header, but it is relatively simple to change the on-device name:

Garmin has a product called MapInstall and MapManager for the Mac software version 2.1.3 as of January 5, 2010 Download (21.24 MB) It's similar to Garmin Mapsource. The files from user:Lambertus Garmin OSM World routable (should) work.

Very similar to Linux. The difference is that the Garmin device is automatically mounted into the /Volume path instead of "/mnt/gps" (or whatever). You can rename the device path name from the default by marking the device symbol and accessing the information panel (command+i). Now rename it to e.g. "GARMIN". So you get the device path /Volume/GARMIN . On this device create a directory named "Garmin" and copy the file "gmapsupp.img" into it. That's it.

Older firmware versions of the Garmin GPSmap 76CSx are confused by files that OSX places on the card when indexing it with spotlight. After connecting the Garmin in mass storage mode, the next time the Garmin is powered off it will sound a continuous low error tone, only fixable by removing the batteries.

The fix is either to update the firmware, or to place a file called .metadata_never_index in the root folder of the Garmin memory card. To create the file, open a terminal and issue the following:

will show you all the hidden files and

(The order in which the .img files are provided does not matter)

Note: Sometimes merging two gmapsupp.img files together doesn't seem to work but merging the two files that were used to produce them will work, e.g.:

Once you have a gmapsupp.img file copy it to your Garmin device:

You first need to convert the downloaded OSM data into a tdb and img file:

Maps in the MapSource format (a .tdb file and a bunch of .img files) can be converted to the Mac OS X .gmapi format using Gmapibuilder. This way the maps can be used in Roadtrip.

Using POIs from OSM along with Garmin Maps

If you want to use just POIs from OSM (e.g. "amenities") on your Garmin device, along with the maps that Garmin provided, have a look at the "Using POIs from OSM along with Garmin Maps" page.

Garmin also offers a free POI Extra pack that is generated out of OSM data (Europe) and released under ODbL.

Newer Generations of Garmin Devices can display raster maps via the KMZ capability and Birdseye view. Garmin's use of the KMZ format is rather limited and allows only for smaller maps. To create a KMZ file from a custom raster map is possible with MapTiler or using a Google Earth overlay. The proprietary JNX format of the Birdseye view on the other hand allows for maps with up to 50000 tiles on 5 zoom levels. The JNX format has been re-engineered and there are multiple tools to create JNX Raster Maps that can be used after applying a firmware patch.

If you know of any Garmin devices which support maps but do not work with OSM maps, please list them here.