Keypad-Mapper 3 is an Android application dedicated to the rapid mapping of house numbers and address nodes.

This app is an enhanced version of KeypadMapper2, which is based on the original KeypadMapper published by Nic Roets in 2010. ENAiKOON would like to express their gratitude to Nic, who supported them during the implementation of the app's latest version with his ideas and patience.

Keypad Mapper 3 is no longer available on Google Play Store since it hasn't been maintained or updated since 2013.

The best option is to download it directly for one of the forks, as these releases are from 2018 and not 2013 and therefore is more likely to work with recent devices.

The other option is to download the application from F-droid. Since it hasn't been updated it is no longer in the main repository. You can find it in the archive repository or download it from the site.

Remember this release is from 2013 compared to the newer releases from the forked versions. In most cases this shouldn't make a difference but for some devices the newer forks may work better.

You can even get if from Amazon app store (although f-droid is probably better):

You will typically find the newly uploaded house numbers on the OSM map in the highest zoom levels some minutes after uploading them and after refreshing your browser window with the OSM map. 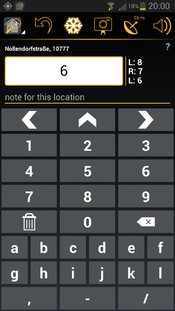 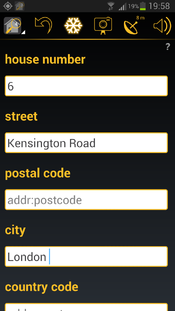 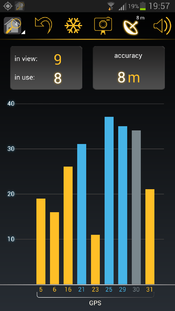 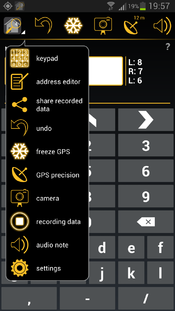 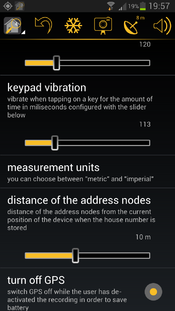 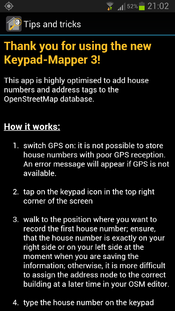 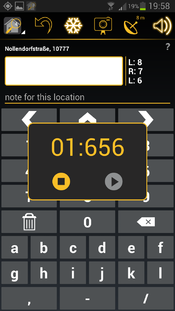 OpenCellID is an open-source project complementary to OSM.
The intention of this project is to collect GPS positions of GSM base stations. The data collected by the contributors of this project can be downloaded from OpenCellID under the terms of the Open Database license.
One of the main reasons for collecting OpenCellID data is that it can later be used for locating devices in areas where GPS reception is not available.


Keypad-Mapper 3 is a perfect application for collecting OpenCellID data while simultaneously collecting house numbers because Keypad-Mapper 3 users systematically walk down many different streets which guarantees optimal data for OpenCellID. Base stations along main roads can already be found in the database but base stations off the main streets are rare. This makes Keypad-Mapper a valuable source for CellID data. This feature cannot be switched off. Please use keypadmapper2 if you do not want to contribute to OpenCellID.

Reading the OpenCellID data from the GSM modem requires the permission 'to read phone state and identity'. The app does NOT use any other information of the phone state and identity except MCC, MNC, LAC, cellID, and signal-strength. The implementation of this feature ensures that the data is collected anonymously (see talk:Keypad-Mapper 3), ensuring full compliance with the very strict privacy laws in Germany. OpenCellID data is sent via the internet to the OpenCellID server immediately after they are collected. If the Wi-Fi only option is activated in the settings menu, the data is stored on the phone until a Wi-Fi connection is available.

tips and tricks for efficient mapping of house numbers

The source code is available at github

the RECORD button has been restored:

the survey date is saved with each address tag:
See: Key:survey:date

optimized screen layout for larger screens:
Some mappers are using 7" to 10" tablets for mapping. The relatively new Google Nexus 7 seems to be especially wide spread amongst mappers. This can be attributed to the fact that these devices have a longer battery life, allowing mappers to go on extended mapping tours without having to change the battery.
The new Keypad-Mapper version 3.1 provides a completely new user interface, optimised for tablet users in both landscape and portrait modes: 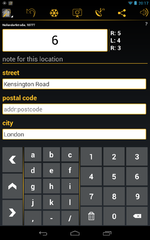 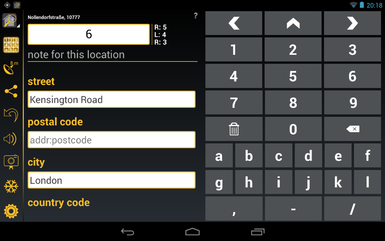 This UI is automatically activated on all devices with a minimum screen size of 7". Samsung Galaxy Note 1 and 2 are NOT using the tablet layout. Despite the fact that they are categorised as tablets the screen area available on these devices is not big enough for a proper tablet layout. The tablet layout differentiates from the phone layout as follows:

, 'CLR' has been replaced by

There are other cases, like the situation shown in the pictures below, where the house number is hidden, making it necessary for you to pass the entrance and then look back for reading the house number: 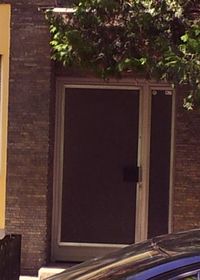 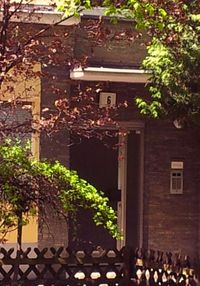 , the freeze mode is cancelled automatically and the freeze icon is no longer highlighted.

Another use case of the freeze GPS option is taking a photo with the GPS coordinates of the subject in the photo:
in this case, you can go to the place where the subject of the photo is located, use the freeze GPS option, and then relocate to take the picture of the subject.
This ensures that the GPS coordinates stored inside the JPEG file points to the position of the place and not to the position of the photographer.

optional text entry:
A separate field has been implemented for entering additional text, assigned to TAG key 'name'. While entering such additional text, a full keyboard is shown on top of the keypad with all required characters.
This is especially helpful when saving notes for future reference when optimising the data later in an OSM editor or if a house number must be mapped with characters different from the ones on the keypad.
The note is stored in the .osm file assigned to a TAG with type 'name'.
Example:


This information can be deleted with the OSM editor after using it or it can be assigned to the correct TAG type.

motivation:
The number shown in the circle of the app icon indicates the number of house numbers mapped that day.

In addition fewer characters are shown on smaller screens.
In case that you are using a small screen, all characters are made available if you turn the device to landscape orientation: 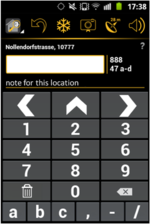 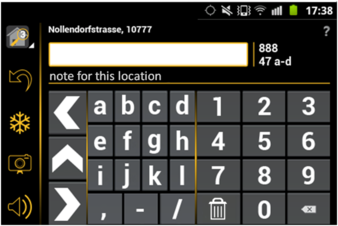 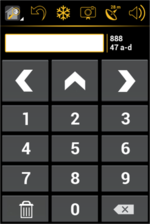 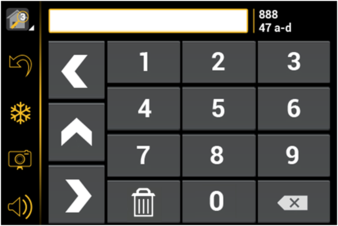 history:
The last two or three stored house numbers are continuously shown on the right side of the house number entry field.
The amount of shown house numbers depends on the size of the screen.

connect to the internet via Wi-Fi only:
This option is especially helpful if your current GSM data plan is expensive or if the amount of free data is limited.

keep screen on:
This option keeps the screen of the device on while mapping.

swipe from screen to screen:
The user has the choice to either tap on a menu item to open another screen or to swipe horizontally over the screen with one finger to get to another screen.

delete all recorded data:
This option is normally used to free some space on the device as soon as the collected data has been successfully sent to the PC running the OSM editor.

resource editor integration:
All text resources and graphics resources used by the app are maintained in the ENAiKOON resource editor. This is a server-based web application.
Advantage: an additional language or any changes of some existing resources are immediately available for all users of the app without the need of updating the entire app. 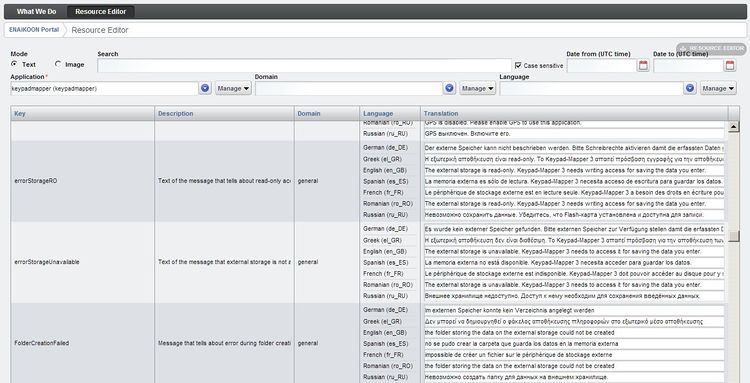 crash reports:
In case the app crashes, there is an option to send a crash report with important information (e.g. a stack trace) to the Keypad-Mapper 3 developers.
This allows them to find and fix the bug in order to ensure the highest possible quality. No private data, including passwords, is sent to the developers.

other great apps for mapping house numbers:
The main idea behind Keypad-Mapper 3 is to map house numbers, and eventually address nodes, as efficiently as possible for a seamless editing of data later at home with JOSM or any other OSM editor.

Many mappers feel that adding tags other than the house numbers while mapping is a waste of time and that it can be done more effectively and conveniently later at home.

Other OSM mappers prefer completing the data immediately while collecting it, including a precise position of the node on the map.
OSM mappers with this preference might prefer OsmPad.

OSM mappers that prefer not to specialize in house number mapping but would rather map multiple geo data at a given position may prefer the OSMtracker app.

During the SOTM 2013 OpenStreetMapconference in Birmingham Markus presented version 3.1 of the Keypad-Mapper 3. PDF slides of the presentation are available for download. The video is available at http://lanyrd.com/2013/sotm/scpkgq/

The development of Keypad-Mapper 3 has been sponsored by ENAiKOON GmbH.