From OpenStreetMap Wiki
(Redirected from Mapping Techniques, Tips and Tricks)
Jump to navigation Jump to search
Mapping techniques - Other languages 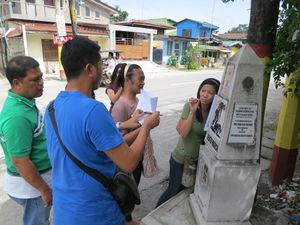 Mapping is done in two steps:

Getting the shape of streets 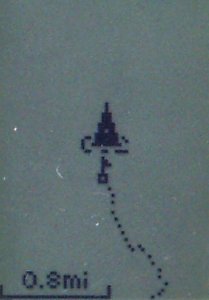 Tracklogs on the GPS screen

The basic technique for mapping roads, footpaths, ferry crossings, ski routes, etc. is to just turn the GPS on and let it record tracklogs as you move. These --- provided they are in the WGS-84 datum, which is the default --- can be uploaded directly to OpenStreetMap and displayed on the editing map.

Set the GPS to record points as densely as possible. On the Garmin systems this is in the "Tracks", "Setup", "Resolution: Highest" menu.

JOSM itself can be used to record logs: the surveyor plugin (with the help from the livegps plugin) allows to add information to the current position.

Several applications let you record GPS tracks with your laptop, PDA or mobile phone, provided there is a GPS receiver connected.

Some Mobile applications to record GPS traces include:

A more theoretical approach to the recording of details is in the making at Geotagged meta data.

Many cities have high-resolution georectified aerial photos available for them which can be used to aid mapping. Due to licensing concerns of the derived data, you should use only public domain imagery, or imagery where this is explicitly allowed (such as Bing aerial imagery). This also aids building the map later if you're using an editor that supports using aerial imagery as a background.

See Aerial imagery for a list of possible sources for tracing.

Improving the map with high-resolution photography

Around 2010, a number of sources of high-resolution aerial photography first became available for use in OpenStreetMap. Today, lots of imagery sources can be used for mapping. These include:

In some parts of the world these give mappers the opportunity to redraw the existing map more accurately.

Things to watch out for

Sometimes photographs are displaced away from the real position of the features that are photographed. You should check that the roads in the photograph are aligned with the GPS tracks that people have contributed to OSM and move the background if you need to.

Something else to watch out for is features that have changed on the ground since the photographs were taken. It is best to use local knowledge alongside the pictures to avoid this.

You can redraw roads with more points on curves to follow the road on the ground and you can also straighten roads that really are straight. You can also look for roads with markings dividing the lanes and tag them suitably; check for tagging advice in your country but this often means highway=tertiary or above when more than a short stretch near junctions is marked.

High-resolution imagery is one of the few practical options for mapping Buildings. Since each town and city could have thousands of buildings, you'll need to decide where you want to start. Maybe doing all the buildings for organizations such as churches, schools, or community buildings. Maybe you start with the downtown or a major shopping centre. If you want to tackle a whole town, try to focus on the larger buildings and work on a specific area at a time. Aerial imagery is not always up to date, so you may have to rely on your own notes or memory to image some of the newer buildings.

When photographs are taken at an angle the tops of buildings (especially high ones) are a distance away from their correct position. You can move the traced outline of the building so that it is aligned with the base of the building on the sides where you can see it. For some tips how to draw buildings, see Roof modelling.

GPS receivers make it very easy to mark waypoints. On the Geko for example, "Mark", "OK" will insert a numbered waypoint. In the example shown, the cartographer stopped in a pub car park, and marked a waypoint which was stored as number 206. Some GPS models allow you take an 'average' point. This will take multiple GPS points and then average all the points, in theory creating a more accurate waypoint. Usually this is used when accuracy is higher priority with the data collection and time isn't as much as a factor but this can still be done quickly.

Use a notepad, or dictating-machine, to record what that waypoint corresponds to. Although it's usually possible to type this information into the GPS itself, it can be very fiddly.

For special needs you may want to upload the waypoints to the OSM traces server. 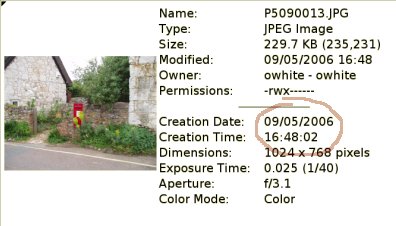 Digital cameras are useful for recording street names, village names, and other features. Because digital photographs are timestamped, we can find out where the photographer was at the time (using their GPS log), and mark that as the photograph location.

In the example here, we might put a postbox on the map, wherever the GPS was at 4:48 pm.

Alternatively, you can use specialized software that will correlate your GPS log to your photos. The GPS information will be added to the metainformation inside the images (most commonly, the EXIF metainfo inside JPGs). That way, you can programmatically have a list of places where you took a photo. OSM software such as JOSM includes support for these "geocoded photographs".

Some software, e.g. TrekBuddy allows one to associate a photograph with a waypoint. This is understood correctly by JOSM.

When geocoding photos, be sure that the camera is in sync with the GPS time (test it before trekking!); otherwise the correlation will be displaced.

One can simply use a pencil and paper to map. See the main article for specific techniques.

Field Papers is a web-based tool for easily creating a printable map atlas for anywhere in the world that you can print and add notes to.

Some mappers have found voice recording to be the medium of choice mapping. It's a form rapid data gathering which leaves quite a lot of interpretation work to do later, but it is also quite "hands free", so can be great for mapping by bike for example, avoiding continuous stopping and starting 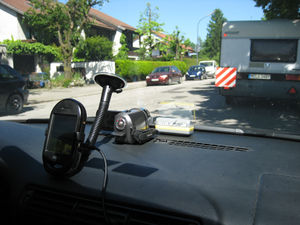 Videomapping setup in car, view from inside

For those driving alone who can't stop to take notes: mount a video camera (or digital camera in "movie" mode) somewhere that it can see roadsigns, and leave it recording for the duration of your journey. You can combine this with audio mapping (speaking road names and information into the video camera's microphone, e.g. "turning left into Darwin Drive").

Photogrammetry is a technique used by many mapping agencies and companies to gather data. When you have two photos of a scene from different positions it's possible to extract the geometry of the scene. This can be done manually or by software and by using this, features such as buildings, road shape and amenities can be added to the map with a high relational accuracy.

This is a quite popular method, but it has several drawbacks like the fact that you can not see names and many POI in the imagery. One maps without surveying in an armchair, interpreting aerial imagery, existing traces, and fixes problems reported in Notes.

Once all the tracks have been added and updated, you are ready to begin colourizing the map. Some areas can be added from memory, but not all areas have clearly defined boundaries. It is important to make sure the streets (the GPS tracks and TIGER data) are properly updated first because often times they form boundaries for other areas.

You can use aerial imagery (e.g. the default ones in our editors) to fill in such things as parks, shopping centres, hospitals, golf courses, lakes and airports.

One way to start off is by referencing a directory for a certain category (i.e. churches, schools) with their addresses and then cross referencing them on a map. Once you know where they are, you can begin adding nodes and land use into OSM.

Most times cities and counties will have colour-coded municipal zoning maps that can be used to fill in the land use for residential, agricultural, retail, commercial and industrial. These maps are often divided into specific categories (e.g. light industrial, heavy industrial). The zoning maps can be loaded into an image editor such as Photoshop and then the zone colours can be combined. It doesn't matter what colours you pick just so you know what colours are what.

You can use a program like Map Rectifier to warp an image so it can be used in OSM. Once it has been warped, it can be loaded into JOSM in a WMS layer. From there, you can trace the zones and add the appropriate land use tag.

You may be able to find a GIS map from a city or county that has park info on it. You can view that shapefile data in a program like ArcGIS. Once the info is on the screen correctly, you can do a screen shot and then use that as your layer to warp in May Rectify. You must check that copyright of original images allows using it in OSM, consult it with others if you are unsure.

Depending on the type of tracks which you intend to create, some transportation means are more suited than others. Obviously, for tracking rails and motorways, you have to use an allowed vehicle. Generally, a car is good to track all the length of a motorway, where little special features appear. A bike is good for medium distance tracks, where you might want to stop frequently to mark points of interests or intersections. For tracking residential areas with dense features, inline skates or a skateboard/longboard are the way to go.

Gear which supports your mapping in the field

In some cases, you may be away from a computer for an extended period, and the number of trackpoints your GPS holds can become a severely limiting factor. You may need to increase the interval between trackpoints, consider using a different model of GPS, and plan ahead for extra battery capacity.

In general you should keep your traveling to public rights of way, although there can be some exceptions (such as an access road into a camp site for example). Use your common sense, if a driveway is labelled 'No Trespassing' then respect the sign and do not enter.

When taking photographs which will later be made public, treat the property as you'd expect yours to be treated. Intrusive photographs are not needed in order to map the streets, you might question whether street number signs are 'fair game' – in rural areas these can be useful as they may be the only way to confirm the name of the public road leading to the property/address.

There's also a page for more detailed analysis of restrictions on photography and national differences. 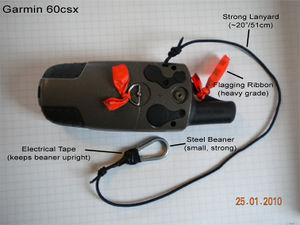 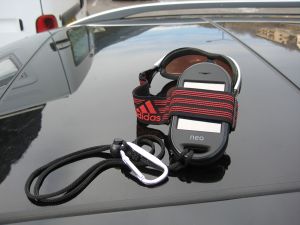 If traveling with a lot of gear and/or when there's a risk of dropping/losing your GPS unit, it's good to rig up your GPS so it attaches to you. Here's an example photo. Just attach a carabiner to a secure d-ring or loop on your belt/vest/pack etc. Attaching bright colour flagging ribbon is very helpful to find the device if you do drop it in a place where it blends into the terrain like in forested regions. (This setup also works great for other types of gear as well ie. field book, compass, range finder etc.)

An alternative useful for winter sports is to insert the device into the loop in the strap of your goggles (as shown in the second photo). The device should be sufficiently secured, has a good reception and you have both hands free. For additional security, a cord with a carabiner, attached to your clothes, is still a good idea.

(In case you find skiing goggles uncomfortable on a sunny day, there are some lighter goggles with better ventilation which, however, still have a head strap as shown in the picture.)