Notify that a section of a highway factually has some type of railway tracks running on it, and this space is shared with other vehicles, although the rails are mapped as separate ways.

The value of the tag should always follow that of the railway=*-tag it shadows. Only railway=monorail should be explicitly exempted, since the monorails run above highways and never embedded in it. Also e.g. values railway=miniature and railway=funicular may see rare use, but there's no obvious reason to explicitly exempt them (see below for examples of some railway=*-tag values around the world).

The railway=tram wiki page suggests mapping tramway tracks always alongside highways as a separate way (though possibly using the same nodes as the highway) even if they in fact run on the highway. There are many good reasons for this convention and it need not be changed.

There are also cases where a subway rails (railway=subway) or a railway railway=rail, (see e.g.: here. Thank you to user Graeme Fitzpatrick for noticing this!) run embedded on a highway.

Other traffic should be notified that there is a track, physically, running on the highway. The need for such notification is particularly acute for bicycles, mopeds and other vehicles that have narrow tyres. Railway tracks have deep indentations that narrow wheels can easily and dangerously slip into. This danger alone warrants a note to routing programs so that they can avoid routing e.g. bicycles through such streets.

Because the tracks are mapped as separate ways, a new tag is needed for the highway.

One earlier proposal was to map these highways with a bicycle access-tag (since the current proposal somewhat resembles the bicycle=use_sidepath-tag), but this was wisely deemed as too narrow a tagtype for this use.

Also the tag-value proposal of railway=separately_mapped received mixed approval in voting because it was thought that it e.g. misused already existing tag-namespace and would have been confusing regarding rendering. The current tag-value proposal was originally suggested by users Mateusz Konieczny and Rainero, thank you to both! 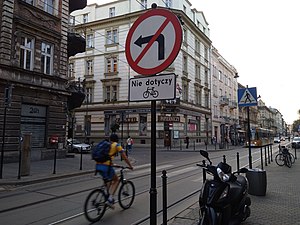 Tagging is applicable only to highways on which there in fact are tracks.

If the tracks run on a physically separate lane between highways or next to a highway, these adjacent highways should not be tagged.

If only a subset of lanes on a multi-lane highway have embedded tracks, this can be handled as usual with the lanes-tagging scheme.

Ways. Nodes do not warrant a notification since a highway running (even almost) tangentially to or intersecting with tracks does not pose the danger mentioned above to narrow tyres.

No need to render as the existence of the railways is obvious in a glance of the map, but routing programs need this extra tag.

It was approved with 21 votes for, 1 vote against and 1 abstention.

The feature was approved, but the community raised some issues. See the Follow-up proposal

The proposal was accepted, but there were some issues raised. Thank you again very much to everyone who voted, commented and/or participated in the discussion on the mailing list!

This will take me some time to complete. In the following days I will create the wiki page, following the highway-key page as a template (as proposed in the Proposal_process page). I'll add entries and examples of all the different key values in the proposal. I will also add an explicit entry and an example on lanes tagging, where only a subset of lanes have embedded tracks.

After the wiki page is complete, I will add links and a short description to the feature to the railway wiki page, and a very short (perhaps one-line) description and link to all the railway-tag key pages (railway=rail, railway=subway, etc).