A couloir may be a seam, scar, or fissure, or vertical crevasse in an otherwise solid mountain mass. Though often hemmed in by sheer cliff walls, couloirs may also be less well-defined, and often simply a line of broken talus or scree ascending the mountainside and bordered by trees or other natural features. Couloirs are especially significant in winter months when they may be filled in with snow or ice, and become much more noticeable than in warmer months when most of the snow and ice may recede. These physical features make the use of couloirs popular for both mountaineering and skiing.

This is a second proposal of Proposed_features/couloir. This last proposal was rejected because there was not enough voters. A couloir is an important part of mountain topology, wildly use in mountaineering, basic orientation in mountainous terrain or just common knowledge.

This is strictly a linear feature placed on a way.

Because of the unavailability of the tag, some very important couloir in the Mont-Blanc for example have been tagged different ways :

This way should be traced following the middle of the couloir. 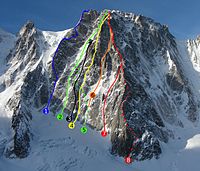 A valley is way more wide (hundreds of meters or even kilometers wider), it has multiple ridges and summit and have been made by rivers and big glacier in the last ice age.

A gorge is a vertical and narrow crevasse made by a river or any other strong water flow. They are mostly in valleys and not "part of a cliff" (see the "gorge du Fier" for example).

A gully is a small scale land form (a meters to a few tens of meters) incised into surrounding terrain through erosion by flowing water. Also they are applicable to most terrain (hill, flat land, mountains), but Couloir are specifically found on mountainous relief, especially on mountainous terrain.

A couloir can be 1000 meters long and they can be from a few meters to a few hundreds of meters wide. They are usually very steep and exposed to danger. Also, they are not seen as barriers (as a gully can be), but more as way to ascent or descent a mountain.

There are gully on mountainous terrain but these are cracks in a cliff that are only a few meters wide. A couloir can end in a gully or multiple gullies.

It was rejected with 15 votes for, 9 votes against and 2 abstentions.

I might approve of "chute", which is of French origin too:
Description: A steep gully in mountainous terrain, bound by rocks on either side, filled with scree or bare rock with scant vegetation; more prominent in winter, when filled with snow. In places also called a "couloir".
Distinction: A subset of gully in its colloquial and geological usage. Not a product of fluvial erosion, cf canyon/gorge/ravine/etc. Smaller than a valley. Wider than a crevice. Bigger than a dihedral/chimney/crack etc.
Sources: https://avalanche.org/avalanche-encyclopedia/couloir/ https://climber.org/data/glossary.html --Hungerburg (talk) 09:50, 19 February 2021 (UTC)

You are a native speaker? Would the article on gully have to be adapted? In couloirs, flowing water is not the only driver of erosion. E.g. rockfall, coming from the sides, but also from within, happens all the time, not just when it rains. --Hungerburg (talk) 09:25, 22 February 2021 (UTC)

Not a French speaker :), but I'm a native American English speaker. Yes, the gully article seems to have a very narrow definition of gully & should be modified. It could be a pretty simple, minor change. My comment is coming from the fact that every definition of couloir mentions gulley, and it seems that every couloir has the word couloir in the name. Here are 2 semi-local (to me) articles: A couloir is a steep, narrow gully ... ... deep, often steep gullies ... Bradrh (talk) 17:32, 22 February 2021 (UTC)