Scotland (Gaelic: Alba) is a nation in northwest Europe and one of the four constituent countries of the United Kingdom. 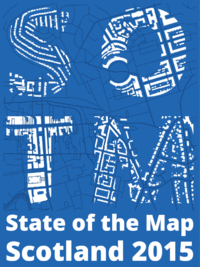 State of the Map Scotland 2015 happened in Edinburgh in October

Welcome to the Openstreetmap wiki project page for Scotland. This page collects some of the projects that are of interest to Scottish Mappers. We also list the projects where local groups have set up regular social meetings so you can have a chance to meet other mappers face to face.

For general discussion or to get in touch with the community, you can join the talk-scotland mailing list.

In Scotland we have reasonably regular pub meetings. These are generally informal and relaxed, and tend to be in a pub, although there are also Missing Maps Project nights too. How regular they are depends on the local group. In Edinburgh, these are now happening monthly. Historically, there were meetings every 3 months in Edinburgh, Glasgow, and one other place, but this has not been happening recently due to lack of interest.

If you are setting up any regular monthly, quarterly or biannually meeting please add a note of them here.

More events soon, keep an eye on this page

State of the Map Scotland

Some facts about the Scottish OpenStreetMap as of October 2011:

Some old Ordnance Survey maps of Britain are coming out of copyright, starting with Scotland. A project is running to scan and rectify these maps, then make them available to trace within Potlatch and JOSM.

The national advisory partnership for Gaelic names is Ainmean-Àite na h-Alba (Gaelic Place-Names of Scotland). They have produced place-name lists for several trunk roads and a number of areas of Scotland. These lists have been researched, and agreed with local authorities, so can be considered to be the definitive Gaelic forms of the names. Ainmean-Àite na h-Alba have been contacted, and confirmed the Gaelic forms of the names themselves are uncopyrightable, so are fine to use in OpenStreetMap.

An OSM rendering showing the Gaelic names, and a map in Garmin format, is available at OSM Alba.

After searching for "Statutory list of roads" the results are shown, please update if new information comes forward or links change

Preserved counties are counties based on the historic counties of Scotland and used for lieutenancy. See also the English Wikipedia page about Lieutenancy areas of Scotland.

The following tables shows our progress with mapping the cities in Scotland.

The following tables shows our progress with mapping various towns and villages in Scotland.

Please add a town or village that you're interested in or tracking/mapping here. Try to keep the list ordered by Town Name. Where necessary create a sub page to try and keep this table quite succinct.