From OpenStreetMap Wiki
Jump to navigation Jump to search
Tag:boundary=forest - Other languages

A delimited forest is a land which is predominantly wooded and which is, for this reason, given defined boundaries. The lands inside the boundaries are often subject to different rules than the surrounding lands. The delimited area is typically named, and have materialized, visible, typically cleared, boundaries. It may cover different tree stands, non-wooded areas, highways… but all the area within the boundaries are considered and managed as a single forest.

Some forests may even be predominantly scrubland (natural=scrub), which often forms after a clearcut followed by natural regeneration (i.e. no plantation). In this case, the land will not be again tree covered until the seedlings grow, which can take decades.

Here are some examples of delimitation of forests and forests compartments in France:

A wild wooded area is considered a delimited forest when its limits are clearly materialized, for instance with paint, boundary markers, or cutlines.

Delimited forests and protected areas may overlap or coincide. If they overlap, they can be modelled separately, with a boundary=protected_area entity and a boundary=forest entity.

In some cases, though, a delimited forest may also be a protected area (most likely, IUCN Category VI): for instance, in France, the Réserve Biologique Dirigée (RBD) and Réserve Biologique Intégrale (RBI) can legally only encompass public forests, which are always delimited forests. In such a case, the facts that the area is, on one hand, a forest, and, on the other hand, a protected area, cannot be separated.

In the case that a whole delimited forest is also a protected area and these two characteristics apply to the same entity (a RBD/RBI, for instance), they must be mapped with a unique OSM entity, which would be tagged with boundary=forest + protect_class=*, consistently with the tagging scheme for IUCN Category II national parks (tagged boundary=national_park + protect_class=2). It is appropriate to also tag this entity with other relevant tags commonly used with protected areas, such as related_law=*, access tagging, or leisure=nature_reserve if applicable, to reflect the dual status of the area.

If, on the other hand, the protected area and the delimited forest exactly encompass the same area but are distinct features (that is to say, the legal protection status of the area is not attached to the area being also a delimited forest), they should be mapped with separate entities: a boundary=forest entity for the forest, and a boundary=protected_area for the protected area.

The fact that an area has the word "forest" in the name does not necessarily mean that the area should be mapped with the proposed tagging scheme: the wooded state of the land must be a predominant characteristic, and there must be defined boundaries. For instance, US National Forests have mostly unmaterialized boundaries, and are consequently not in the scope of the proposed tagging scheme.

Named natural forests, such as Germany's

Black Forest, are indeed large wooded areas which are considered as a unique forest, but they lack clear boundaries, are not effectively managed as a whole and, as such, do not qualify for the proposed tagging scheme.

Is this a delimited forest?

Here are some special cases where the applicability of the approved boundary=forest relation may need clarification.

The approved proposal mandated the materialization of boundaries, out of verificability concerns. That being said, some contributors, in vote comments, on the Talk page of the proposal or in the various preliminary discussions, explained that in their country, forest boundaries are not materialized out of practical reasons, for instance lack of funding, like in some African countries.

Though some sentences which follow do not meet the approved definition of this tag, it may happen that you want to map a forest corresponding to the above definitions, with the difference that its boundaries are not materialized but are still verifiable according to local laws and practices; for instance, the boundaries are published, and this publication is generally acknowledged by local people, societies, enterprises, authorities… as a legitimate, verifiable source. In such a situation, this source could be considered verifiable enough to allow mapping the forest. Be advised, though, that this appreciation may be challenged by mappers having stricter criteria of verificability, i.e. requiring boundary materialization.

A delimited forest should be mapped as follows: 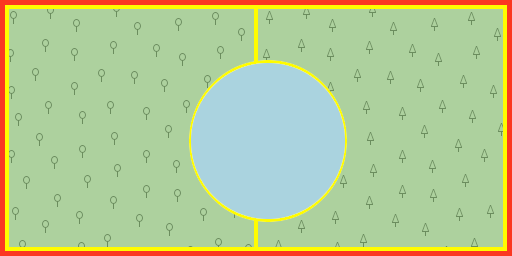 Example modelling, with two different wooded areas (tagged natural=wood) and the overall delimited forest entity (tagged boundary=forest); the pond is considered part of the delimited forest and therefore included in it.

The overall delimited forest (entity tagged boundary=forest) can be tagged as follows:

What if I encounter a natural=wood/landuse=forest (multi)polygon which in fact represents a delimited forest?

The forêt communale de Chauffecourt would be modelled by an entity (area or relation) tagged this way:

The Einsiedler Wald relation would be tagged this way: