"A bakery is a shop selling bread. Bakeries normally bake fresh bread on the premises."
So normally but not always. If the shop is primarily selling bread, tag it as a bakery!
If it sells bread but also all sorts of other things, maybe a different tag such as shop=convenience is more appropriate.
-- Harry Wood 15:21, 23 May 2011 (BST)

In france, only shop who make bread on the premises can named "Boulangerie". I said "industrial bread bakery for the others.--Christouf 20:46, 4 October 2011 (BST)

We're not so strict for the word 'bakery' used in the UK. A shop might sell bread and be called a bakery without actually baking the bread on the premises. Bit unusual though. If a shop has a focus on selling bread (which is pretty much how I would define this tag) then it would normally bake the bread there. On the french translation of this page, you might want to point out that this tag can possibly cover things which you wouldn't call a boulangerie. Also maybe we need a property tag. "baked_on_premises=no" or something to flag up these ones. I wouldn't called that "industrial" though. -- Harry Wood (talk) 11:53, 4 July 2013 (UTC)

In many places in southern Germany, legislation in the 19th century required that baking was done in a central bakehouse. That was built of brick and equipped with a proper oven and chimney. Before, many fires had occurred due to people baking bread in their own timber-framed houses.

Today, such bakehouses are frequently operated by local associations on some weekends and festival days. They often are a distinctive feature of old village centers.

They do not, however, offer baking goods on a regular basis, and are thus no shops.

Is this little thing a Backhaus? 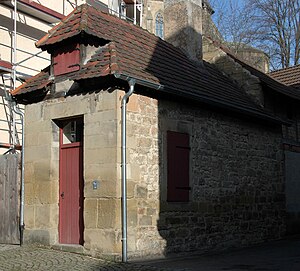 Lauffen am Neckar Backhaus Kirchbergstraße
Yeah historic=bakehouse seems sensible to me. Don't think we have them in the UK.
-- Harry Wood (talk) 11:58, 4 July 2013 (UTC)

In my experience most bakeries offer seating and serve hot drinks, cakeslices, croissants etc. But that is not the case everywhere. Also the prime function might be sale or the prime function might be as a cafe. I thought perhaps I could add a tag for seating. But there seems to be very sight precedene for that. So is the best choice to simply add the tag amenity=cafe in addition to shop=bakery ? MortenLange (talk) 12:57, 17 August 2015 (UTC)

I've been some work with trying to clean up names that violate the naming rules. While doing that I happened to notice that there are a lot of bakeries in middle eastern countries that are named after what type of bread they sell there, instead of by the bakery name. I assume they are specialty bakeries that only sell a single bread. So I would like to introduce something like a bread=* tag that would designate what type of bread is being sold.

There is currently a bread=* tag being used with 22 uses, most of which are "yes." I will probably piggy back off of that one. There's also bread vending machines that this would probably be useful for. I know there is a cuisine tag, but I don't feel its adequate. Since bread is a cuisine, but type of bread is not (at least to me. Unless your talking about a bagel or something similar, but not for french bread or whole wheat). I wanted to get some feedback on it first though. Id like to avoid a proposal process if necessary, but I don't want to adopt a bad tagging scheme either. --Adamant1 (talk) 04:30, 28 January 2019 (UTC)

I don't think we should have a link to the opening_hours tool (http://projets.pavie.info/yohours/) on every shop page. Mappers can be expected to follow the link to opening_hours=* to learn about the format. Similarly, we don't give a long explanation about all the different Addr tags, or the different names tags, on each feature page. --Jeisenbe (talk) 01:24, 24 April 2020 (UTC)

How does redirecting / linking to another page constitute removal. You aren't going to post every validation tool here. It would be more misleading to put a single partial piece of information on this page, and unhelpful to keep up with every bits of info posted on all pages mentioning opening_hours=*. Unless there's somehow an tool specifically for a bakery, it would be counterproductive to add it here. -- Kovposch (talk) 08:46, 25 April 2020 (UTC)