The first UK Quarterly Project for 2016 is Schools.

There are two strands to this project. The first is to remotely (armchair) map and get an increase in coverage of the number of schools. The second strand is for those who prefer surveying: existing school names change (e.g change to Academy Status, amalgamations); there will schools in OSM with no name, and with the advent of free schools, new ones will be appearing constantly.

So there's plenty to do over the next few months! 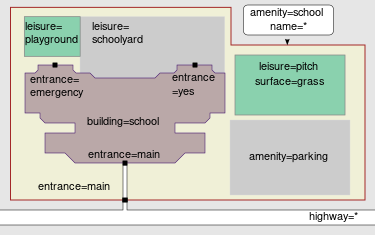 Tagging entrances to a school

Draw and tag the boundary polygon with a minimum of:

Add as many of these additional tags as you can / want to:

Optionally, but preferably, draw the school buildings and tag: 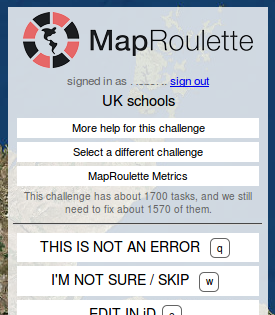 You can use MapRoulette to help you find missing schools. 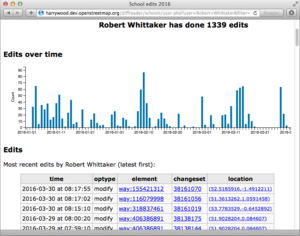 As of 20th February, 250 people have edited Schools in the UK or Ireland! For an always up to date value see here.

We can also look at the number of people who are using adding "#OSMSchools" in their changeset comments. The number of changesets is just for fun - some people edit one school per changeset, others may edit multiple schools. Data from 2016-01-30 was published on Mappa Mercia's blog.

The following table allows you to share comments with other users. For example, where are you mapping, how else are you helping. Feel free to add names and notes to this list.