The US Trail Access Project is a community effort to ensure responsible mapping of trails on recreational lands in the United States. This project is a collaboration between the OpenStreetMap US mapping community and land management agencies of the US Government. This wiki page is a project plan intended to address the issues surrounding responsible mapping of public recreation and heritage sites. Interested in joining the conversation? See Trails Working group.

The scope of this project is US public access lands administered by the US Government. However, the principles in this project plan may be applicable to other public lands at the state and local level.

On September 22, 2021 Keri Nelson, a backcountry coordinator for the US Park Service presented a "Mappy Hour" presentation titled "Trails in OpenStreetMap". The presentation described the damages that have resulted from visitors hiking through backcountry areas and sensitive sites outside of designated hiking trails. Backcountry enthusiasts have used maps and apps sourced from OpenStreetMap data to find and navigate trails in US national parks and public lands that are not designated as part of the park's managed trail system and not listed on official maps.

1. Closed/unmarked trails rendering the same as or more strongly than official/managed trails: On several OSM-based maps and/or hiking apps, examples were cited in which closed, illegal, or non-existing trails were rendered exactly the same as, or more prominently than the marked trail system managed by the park service. This created an expectation amongst park visitors that these trails were of a similar access and character to other trails in the park. 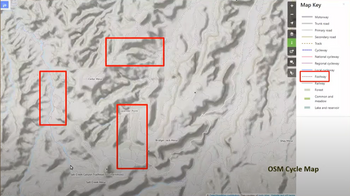 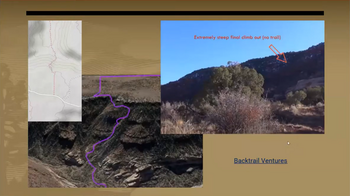 Trail marked along a steep scramble where no trail exists

3. Social trails mapped to posted dangerous areas or off-limits sensitive sites with illegal access Of particular concern to the Park Service are that hikers have created "social trails" to sensitive sites and mapped these on OpenStreetMap. This has encouraged other hikers to follow these trails, causing damage to the important locations. 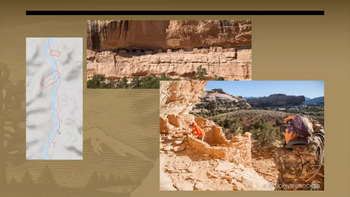 This project uses the following terminology:

Proposed is the following plan of action: 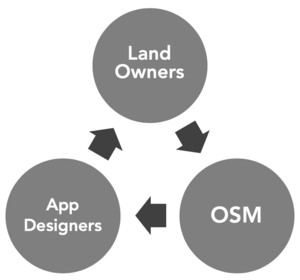 Physical marking laid out by Land Managers are used by OSM to inform App developers and users about appropriate movement on the property.

Regulating traffic is one of the main Land Manager's methods to ensure safety of visitors, environment protection or owner's privacy. In reality this task can only be achieved in full coordination with all involved parties. In ideal case, 1) Land Managers ensure appropriate physical marking of trails and provide information about access restrictions. This in turn serves as information for 2) OSM members for correct tagging of the digital paths. These data are then used by 3) App developers to inform app users about accessibility of certain areas or provide routing that avoids restricted trails. Land mangers can afterwards evaluate visitors behavior and adjust the restrictive marking and devices, which triggers another round of this cyclic process.

In addition it is important to keep in mind that every individual visitor of the property is obligated to follow posted rules and restriction regardless of what the routing device or map might suggest. Experience shows that the vast majority of visitors care about nature conservation and owner's privacy and try to avoid breaking the set rules. If they are found trespassing it is often due to missing restrictive signs or accidentally not noticing the posted warnings. Therefore taking proactive measures in form of posted information can avoid vast majority of trespassing accidents.

Here are some of the possible ways how to inform visitors about trails and areas accessibility:

How trail information gets rendered by apps has a large influence on users when visiting natural areas. Indiscriminate rendering of all trails can cause risk of conflicts with private owners when moving on land that not intended for public use, damage to protected environment and cultural heritage, or serious injury. To limit such risks, we can adjust how is OSM data is represented on a map or inside a routing algorithm.

In the ideal case, the most prominent path features on a map are Official Trails, which can be identified by the Way representing the trail having a type=route + route=hiking relation or not containing access=private;no or informal=yes tags.
Closed trails, Social trails or Private trails are best not shown at all. However, sometimes showing such trails can help orientation in terrain or help in emergency situations. In such cases, rendering of these trails should be substantially less prominent or clearly marked as inaccessible, e.g. with X marks or displaying text PRIVATE/CLOSED.