The mapping of Australian roads is broadly consistent with the global guidelines in OpenStreetMap. This page provides supplementary guidance specific to Australia and its unique infrastructure.

There are multiple competing tagging practices (and some controversy) across OpenStreetMap with regard to appropriate path tagging.

There is significant overlap between path types and it is not possible for these guidelines to be rigidly enforced in every scenario. This ambiguity is compounded by the highly variable quality of pedestrian and bicycle infrastructure: signage can be poorly maintained (or inconsistently applied), designated cycleways or pedestrian ways may become impassible following surface works, signposted cycling routes may direct cyclists to use a seemingly dedicated footway, and so on. When determining the correct tag for a particular way, multiple factors should be applied holistically: signage and path markings, "intended use" and actual use, local laws, published routes, road surface and traversibiliy, surrounding infrastructure, etc. In same cases, multiple tags could be valid: use discretion, and seek further input from the community if unsure.

For paths that are wide enough to support motorised vehicles (such as fire breaks or park management trails) highway=track should be used; see Roads Tagging Guidelines for more information.

A common source of confusion for Australian mappers is the word footpath. The use of footpath in OpenStreetMap is (along with other Australian English terms) counter-intuitive to the Australian English use of the term. The relevant tag is footway=sidewalk, which uses the relatively unambiguous American term sidewalk. For clarity, these guidelines will use sidewalk from here onwards.

The legality of riding a bike on a sidewalk is not consistent. While most states and territories allow bicyclists to use a sidewalk, local government authorities can have bylaws which restrict cycling on certain sidewalks. In states where bicyclists are not generally allowed to use a sidewalk, there are multiple different reasons of exemption. In all states and territories, signage is also used in areas to restrict (no bicycles) or allow (shared paths) bicycles on specific sidewalks.

A signpost for Bellbird Trail

Sanctioned paths are tracks, paths and trails that the landholder has officially designated as being open to the public. These paths are usually indicated by an official track head sign or guidepost, are often maintained to ensure track quality. The landholder may have installed toilets, lighting, and other basic amenities, and the path itself may have constructed with erosion preventative infrastructure, bridges, and so forth.

An informal path is an unsanctioned, unofficial path that is in general use. These paths do not have official signage or endorsement from the landholder, but they are not closed and access to them is not restricted. Informal paths are often desire paths formed organically by individual visitors and local residents, though they are also formed by bush-bashing, urban exploration, and other recreational activities.

desire path on the Diamond Creek Trail in the Challenger Street Reserve. 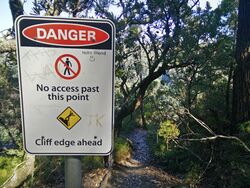 Signage on an Unnamed Closed Path

Most park management authorities restrict access to certain areas to allow rehabilitation of vegetation and to help conserve the environment. Unfortunately not all park visitors obey these restrictions, causing damage and forming unsanctioned paths and trails. Park management authorities are continually closing unsanctioned paths, and park rangers enforce these closures through monitoring and fines. These closures may be marked on the ground with signage, barriers, or through park wide notices that you must stay on designated tracks only (mplying all other tracks are closed). In popular parks, these illegal tracks can become widely trafficked and become visible on external fitness tracking software.

abandoned:highway=type or disused:highway=type
access=no
source:access=sign
operator=Park Authority
A signed, closed path. The path is correctly tagged as being access=no, despite evidence that the sign is ignored by some visitors. Unnamed Closed Path, Morton National Park

When mapping these paths, consider adding additional note=* to help future mappers understand the closure and reason for tagging. 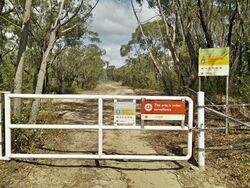 Walkers are allowed to use Buxton Plateau Trail W11

Buxton Plateau Trail W11, however bicycles and horses are not permitted.

Maintainance tracks and internal service roads may be physically accessible by vehicles, usually restricted to authorised vehicles only (motor_vehicle=private), but signposted for use by walkers. These tracks should be mapped using highway=track. Access for bicycle=* and horse=* should be explicitly tagged in all cases, to avoid ambiguity caused by the legal definition of a "vehicle".

Without the small trail marker, this section of the Larapinta Trail

The visibility of a trail can vary greatly, even for sanctioned, official paths. Some signposted walking routes are infrequently used and are quickly consumed by the local vegetation, others are easily affected by seasonal conditions. Not all trails with no visibility are a result of external influences; many coastal routes will include a section of along a beach, but only signpost the official route at either end.

If a trail is not sanctioned, signposted, nor visible, it is not possible to map in OSM with any verifiability. Such routes should not be mapped in OSM at all. If they have been mapped, edited consider using not:highway=* with a note=* indicating why it should not be mapped.

Because of the highly variable state of bush tracks and abilities of users, tag on the basis of their physical condition (width, surface etc) and legal (usually signposted) restrictions, rather than assigning permissions based on subjective assessments.

The difficulty and quality of bush tracks and trails should be mapped using the Australian Walking Track Grading System (AWTGS). The AWTGS is a nationally consistent system to grade the level of difficulty of the track walking experience and then to clearly communicate that information to walkers. It includes a five graded levels of difficulty indicating the suitability for different fitness levels. The AWTGS grade for each track should be captured using hiking_scale:awtgs=AWTGS Grade

Alternate grading schemes (such as sac_scale=*) can be used where applicable, though of grading systems designed for international terrain and weather patterns are often unsuitable for local conditions.

A cycleway=lane on Herbert Street

There are many different types of bike lanes in Australia. Mapping of these lanes is consistent with the global guidelines

Unfortunately, it is possible for a legally designated cycle facility to be completely unusable (such as a "bike lane" that, in practice, is a parking lane). Similarly, a large road shoulder or unmarked area may be safe and implicitly useful for cyclists.  When mapping, use common sense and map according to what is on the ground, rather than relying on technical, legal definitions.

The highway=motorway includes an implicit restriction of bicycle=no. Many motorways and freeways in Australia, particularly rural roads, permit usage by bicycles and should be tagged with bicycle=yes. It is also a good idea to add a bicycle=no tag to roads where there may be ambiguity.

There is an ongoing trend to convert disused or abandoned railway corridors into footways and cycleways, often known as "rail trails".

Cycle routes, Walking Routes, and Riding Routes in Australia can be mapped according to the global tagging guidelines.

Signage at the start of the Kings Canyon Rim Walk

Local routes (lcn, lwn, lhn) are generally short paths and routes that are confined to a local area. This can include short scenic bush trails, suburban cycling routes, and short walks in metropolitan parks.

These routes are often maintained and signposted by local councils and can include fragmented infrastructure and bike lanes. Local routes may be identified only by destination signage rather than having a gazetted name. 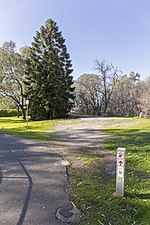 Signage on the Hume and Hovell Walking Track

Regional routes (rcn, rwn, rhn) are longer paths or routes of regional importance, and are likely be connect multiple different local networks. These paths include major cross-city routes and routes that connect regional towns. These routes are often maintained and signposted by state governments or multiple councils, and will often be more prominently defined. Regional routes will nearly always have a formal name.

There are no international networks (icn, iwn, ihn) in Australia as there are no routes that meet the necessary criteria.