From OpenStreetMap Wiki
< User:HiperGuiri
Jump to navigation Jump to search 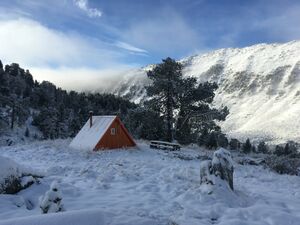 Refugi Airoto-Gracia in Catalunya on a snowy morning

One of the most wonderful and special things about the Pyrenees mountain range are the hundreds of wilderness and alpine huts built for people to sleep in case of emergency or to enjoy a night in the wilderness.

Many of these huts exist as elements in OSM but after a few months hiking around in the Pyrenees it became clear that much of the metadata that exists for these huts is missing or incomplete.

After some research on the current state of the tags and users involved in the editing (see Appendix A&B), this project was created to codify a set of standard "Excellent" tags which our community should strive to have set for each hut, in pursuit of better data quality for all.

What is the point of this project?

The point of this project is to improve the quality of Pyrenees hiking data and to unite the various communities (OSM-ES, OSM-FR, OSM-CA) along the mountain range to collaborate together in pursuit of better data quality for all.

This is not a tagging proposal. It is a guide on how to *excellently* tag huts in the Pyrenees, which is to be discussed, proposed, and agreed upon by members of the relevant communities.

This is a guide based upon community input. This draft guide was created in order for people to have opinions about it and to spark a community discussion, not because it's anyone's idea of how it should be done. Together we can create a hut metadata schema that will describe Pyrenees mountain huts the best they can be.

This is nothing new. The vast majority of tags suggested as required or optional were ones already being used by the community (see Appendix B), and this guide is mostly just a summary of the consensus that already existed in the wild. The only new tags are under the wilderness_hut section "New Proposed Tags".

For those who don't know, both of these websites are databases which have much of the same information about Pyrenees huts as exists in OSM. However, having information in either of these sites is not as ideal as OpenStreetMap for some reasons:

This project isn't meant as a replacement for either of these websites though the projects have much the same goal.

The proposed stages of this project are as follows:

How to provide feedback 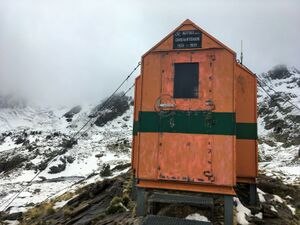 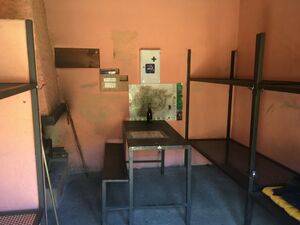 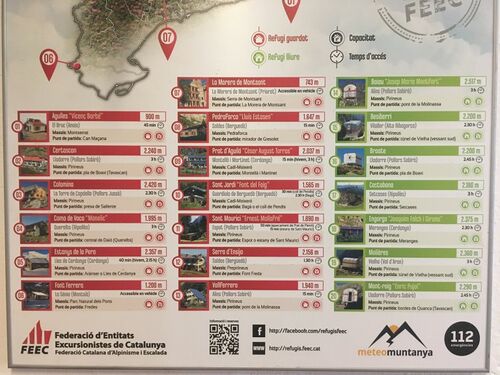 Often times these operators have a reference number for each hut (as in the FEEC poster above). In this case, set the reference number as the value of the ref:* key which corresponds to the organization in the table below.

Below is a list of tagging conundrums that remain unsolved and would be grateful for any community input on how best to handle.

Here I put forth my opinions and look forward to some discussion. 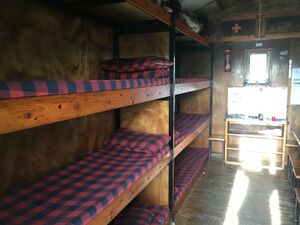 Refugi Mont-Roig in Catalunya is an insulated hut with mattresses, pillows, blankets, table, chairs, first aid kit, SOS beacon, ...but no fireplace. The wiki says no, but anyone you ask in the Pyrenees and they will tell you... this is a wilderness_hut.

Human built structures providing shelter exist in many different forms around the Pyrenees. From a simple wooden roof to an ancient shepherd's hut, to free mountain huts built for tourists, to staffed refuges with showers and wifi, here you can find it all.

In the data, we make the distinction between three levels of shelters:

These tags and their values are detailed extensively in the wiki and explain quite well the differences, except for one thing. In the wiki article (in en/es/fr), it mentions ambiguously that a wilderness_hut is "with generally a fireplace" while also saying "fireplace or stove for cooking and heating" is required.

In the context of the Pyrenees, there are many wilderness_hut's which are very well equipped and insulated from the weather outside, but do not have fireplaces. We should explicitly qualify such structures as wilderness_hut.

Dealing with alpine_hut which have a wilderness_hut room open in winter 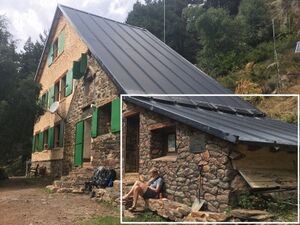 Refugi de Vallferrera in Catalunya is a guarded alpine_hut which is closed during the winter but part of the building (highlighted) stays open as a wilderness_hut during those months.

Many alpine_hut's which are guarded refuges in warmer months keep a small section of the hut open in winter in case of emergency. Usually the wilderness_hut section is only open while the alpine_hut section is closed.

Looking at the existing data for Pyrenees alpine_huts (see Appendix 2), around 16% of alpine_hut's have a winter_room tag which I assume to be the way to tag an alpine_hut as having one of these rooms.

This approach, however, is not ideal. In particular, the characteristics of the hut section open in summer are different than the part open in winter, and so they ought to be two separate elements in the database.

The better solution is to specify two elements, one alpine_hut and one wilderness_hut, and set the opening_hours=* to be the inverse of one another. opening_hours tag is widely used on mobile apps and will render a difference when a hut is closed or not.

What is the meaning of capacity? 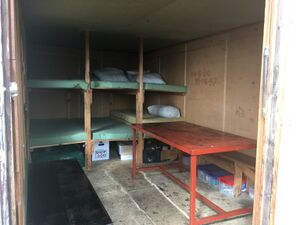 How many hikers can you fit into this hut? Depends how many show up. At this wilderness_hut (Cabana de l'Estany Forcat in Andorra), there are 6 beds but 8 mattresses and you could surely fit 12 people if need be.

Depending on the circumstances, wilderness_hut's can often fit far more people than may have been originally intended. Being that hikers often bring a mattress and sleeping bag, any flat floor or table space can readily be converted to a place to sleep if need be.

So, for wilderness_hut's, capacity is not fixed; it is a range. How do we specify this range in OSM? We must have two tags, one which can specify the *intended* capacity, and one which specifies the *maximum* capacity

beds=* is already in use on 2% of wilderness_hut's while capacity=* is set on 59%. My preference is (1) as capacity=* is in use far more than beds=* and is supported by a number of data consumers.

What does stove=* mean?

59% of wilderness_hut's have a stove=* tag, but what does this mean? Does it mean the hut has a woodstove for heating? Or that it has a fireplace with a grill to cook over?

How to tag wilderness_hut's which are known to have no operator?

Many wilderness_hut's in the Pyrenees are not formally serviced or operated on. How to we specify this in the data? operator=no?

How to specify water source type for a shelter?

Sometimes it is a nearby body of water, running stream, or comes out of a pipe near the hut. drinking_water=yes & drinking_water:source=*?

Appendix A: Top OSM Editors of tourism~wilderness_hut|alpine_hut in Pyrenees

"#" is the number of individual edits made to hut elements, not number of changesets