The plugin validates public transport routes against a set of criteria and, where possible, suggests ways to fix them.

The plugin has no dedicated user interface, it is fully integrated in the core JOSM validator.

This page is edited and only reflects the current state of the plugin. Development issues can be found here in chronological order.

There is a presentation about the plugin for the FOSS4G conference (Brussels, 22.09.2016) available here.

The plugin source code is in JOSM github repository.

There are two public transport schema versions, and some route types are mapped differently than others.

A route relation is tested by the plugin if it:

Each stop corresponds to a plugin class PTStop. If a route relation has two consecutive members that belong to the same stop (a platform and a stop_position), they will form one PTStop.

If a route relation member does not fulfill these criteria, it is not added to the model, instead a "PT: Relation member roles do not match tags" warning appears.

The plugin adds an extra layer named "pt_assistant" to the layer list. Once at least one relevant route relation has been selected, it receives a purple coloring. The stops are numbered according to their order in the relation. 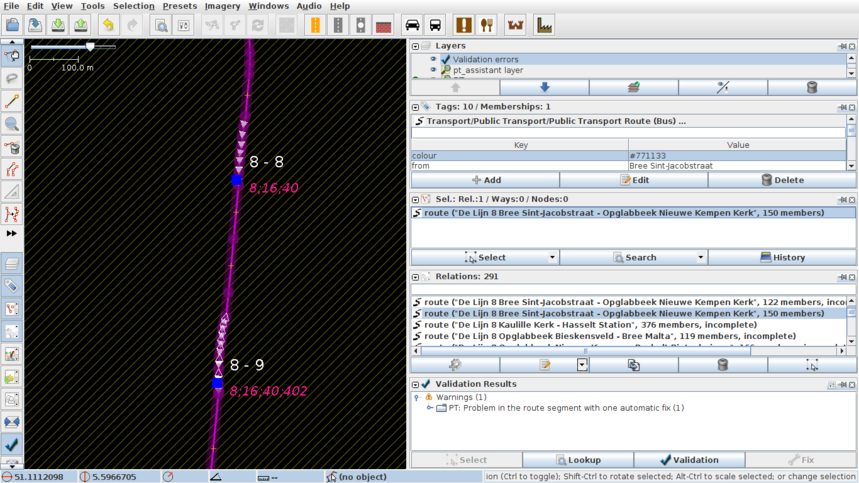 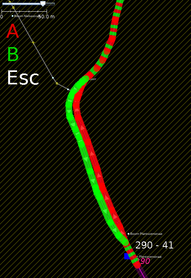 Tests #11-13 in the table use the stop-by-stop approach. This means they look separately at each part of the route between two consecutive stops (referred to as 'route segment' in this documentation). If no error was found in a route segment, that segment is added to the list of correct segments. These tests search for fix variants in the following order:

The stop-by-stop tests (#11-13) may have several fix suggestions. If the fix button is pressed in such cases, the suggestions are displayed using different colors in the pt_assistant layer. Up to 5 fix variants can be displayed. They are labeled using the letters A-E. The user can select the desired fix by typing the corresponding letter on the keyboard. The Esc key can be pressed for no fix.

A PTWay represents the way-related members of a route relation. The relation member can be a way or a relation.

The criteria for both PTStop and PTWay are listed above (Scope). If a route relation member does not fit the definition of either of these classes, it results in a "PT: Relation member roles do not match tags" (#5 in the table) warning.

Although not (widely) used in the current set of validator tests and fixes, the plugin has the potential to handle nested relation members, i.e. cases when a member of a route relation is itself a relation. The prerequisites are that the nested relation may only include ways (no stops) and the order of the ways inside the nested relation must be correct (because it is not further validated). The basis for this has been implemented in the classes PTWay and PTDataManager.

Stops need to be linked to the relevant way of their route relation. Typically, that is the way closest to the stop in question. The search for the relevant way takes place in the following order: 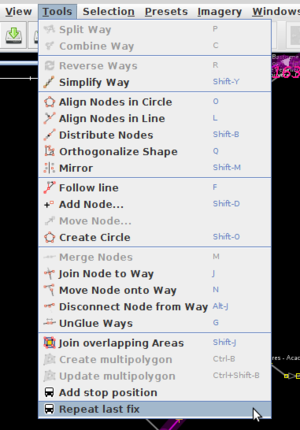 Two items have been added to JOSM Tools menu from the pt_assistant plugin: 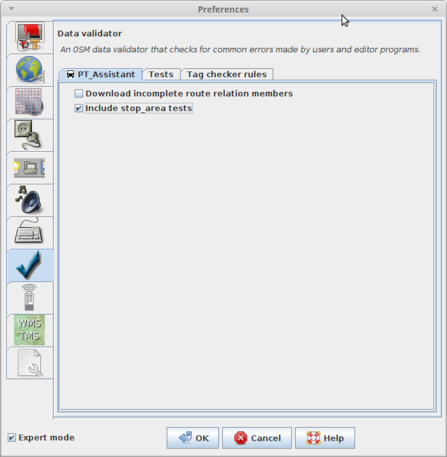 Preferences for the pt_assistant plugin with their default values