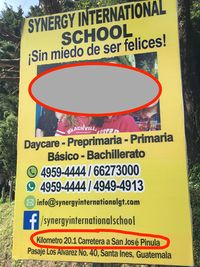 We propose to create a tag addr:milestone=* to fall under the addr=* available subkeys and to be used to fill in a missing data field which is currently very widely used in many addressing systems worldwide. This tag should be used specifically to include the kilometers (or miles) in those cases in which this data is an integral part of the real address, just as they are included and are a part of the address. This proposed tag would also contribute to keep all the address-related numbers clearly visible in a ‘real-world’ system used in many countries.

The most practical and constant way to find an address on a highway throughout the majority of countries in Latin America, is by making reference to the location, based solely on the kilometer readings. These indicators are found, in most cases, on the road markers (a.k.a. highway=milestone) which, on either side of a road, display symbolic distance* from point A (start) to point B (finish) of a specific highway. This form of referencing addresses is widely utilized especially in suburban areas surrounding cities or other populated areas, as well as in rural areas where there are no additional reference points available to help find a location. Outside the known city road networks, making reference to the highway=milestone is generally the ONLY way of having a clue in finding an address to reach any particular point of interest.

Under the addr=* subkeys currently available in OSM, to enter an address that includes kilometer data there is no applicable option that allows to enter this important piece of information. This new tag would allow to enter the kilometer (or mile) data in a logical and orderly manner, complimenting with the rest of the data that is and has been utilized for the local addressing systems, specially in the the previously mentioned regions.

(* - symbolic distance - Over time the original route of a road usually changes due mainly to road improvements, making these wider and faster to travel on, which in turn make these shorter or longer as well. Since the road markers or milestones are placed based on the original routes, the concept of a marker being true to the actual distance of any given highway may become a mere coincidence. Based on this known fact, the addresses that refer to the km are, in most cases, only a label, but do need to be clearly expressed as part of the address.)

The image found on the upper right-hand side of this page shows a real-case example. This shows a sign to a private school - in which one can clearly see (circled in red) the address containing the kilometers as an integral part of the actual address. The rest of the information is useless without the previous data.

In order to reach the entrance to the closed gated residential communities found within the images displayed bellow, the ONLY way of finding these is by making reference to the highway kilometer markings - highway=milestone. Once inside, these communities may or may not have street names and house numbers to identify a specific house, but that is another "local-specific" issue to be solved.

For the examples which appear bellow, all images were taken within a 4.5 kilometer stretch of the same road in the outskirts of Guatemala City. There are literally thousands of cases that use the Km as an integral part of the address on this highway alone (also known as the the Panamerican Highway which crosses the country border to border). There are thousands more of similar cases found all over the country and yet even more in Latin America and in many other countries throughout the world.

This proposed new tag addr:milestone=* would fall under the addr - commonly used subkeys, providing complementary information utilized as a part of the address data. The data entered would be in accordance to the local measuring system used in each country - Metric or English Systems.

In order to match the local address system and as to not confuse the kilometers with all other used numbers within an address, the km symbol should be entered as well, unless this may be somehow auto-filled by the editing tools.

This addr:milestone=* tag would contain additional address information commonly utilized on highways which utilize the highway=milestone as reference, specifically the kilometer (or mile) information found as part of the address.

The current form to indicate an address as a node or polygon will remain the same, without altering in any way the appearance which is currently in use.

The addr=* page would need to be updated in order to add the new addr:milestone=* including the description for the proper usage.

There are apparently no previous proposals made in reference to this topic, therefore there have been no prior discussions on the matter.