The proposal is from Eng. Gorica Bratic and from the idea of mapping deforestation and proposes this tag as a general class of an natural area without vegetation and with bare soil.

The tag barren is meant to delineate land without or with very sparse vegetation (known also as bareland or barren land). The main objective of introducing this tag is to track deforestation in Amazonian rainforest. Currently available tags (i.e. natural=bare_rock and natural=sand ) do not encompass bare soil that is a result of vegetation loss (i.e. soil where vegetation was removed by human, or due to some human-caused or natural processes affecting the soil fertility). As a matter of fact, if the bare soil contains organic matter (as if it case with deforested areas), most probably the vegetation will grow back unless it is further modified by human or affected by other processes like erosion. In any case, mapping this transient period is important as it might last couple of years. An example of long-lasting transient period is shown on the two Planet Scope Scene captured with 3 years difference. It is possible also to check on Bing imagery how the vegetation is extremely sparse on the same area. 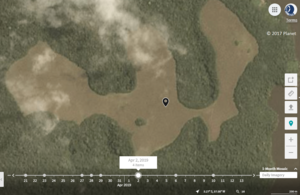 Other than deforestation, area can be characterized as barren whenever the vegetation loss takes place due to the contamination, fire, droughts, soil erosion, etc. The tag barren can generally encompass all the natural surfaces where the vegetation is missing due to natural or man-caused absence of nutrients, natural disasters or human impact like deserts, cliffs, beaches, burnt and deforested areas. The tag barren is very broad in order to make up for lack of local knowledge due to limited access to the rain forests. Sometimes it is hard to distinguish certain types of barren land like natural=scree and natural=shingle even when the satellite imagery is very good. Broader tag also meets the needs of the community to have a tag which is reusable. More specific tags such as natural=sand and natural=beach are very welcome, but in their absence any other (less specific, but correct) information linked to Amazon deforestation is appreciated in understanding underlying processes in order to prevent and stop them.

Tag is related to land cover, and not land use. As previously mentioned, local knowledge is scarce, therefore we have to rely on satellite imagery for mapping in rain forests. Land use is often only known locally, while land cover is visible from imagery.

Examples for the barren land areas in the forest where due to excessive clearcutting the vegetation is removed. The most evident examples are in Amazonian rainforest, but also forest in Democratic Republic of Congo, Indonesia, etc. Forests are also influenced by fires. In example of contaminated sites, locations of barren areas are usually in industrial zones of a city.

landcover=barren is proposed in order to support mapping of bareland areas by means of visual interpretation of satellite imagery. The visual interpretation is especially convenient for mapping larger areas, like it is the interest here (deforestation of Amazon rainforest which has area of 5,500,000 km2). The existing tags as natural=bare_rock and natural=sand do not describe barren land that is a result of deforestation in the first place, and also they might be too specific to be recognized from satellite imagery. Observing if areas are vegetated or not might be much easier. Due to the unpredictable duration of barren land cover, it is suggested for the tag landcover=barren to be accompanied with key {tag|fixme}} to point out uncertainty about duration of this land cover type. i.e. landcover=barren, fixme=”Prone to changes. Revise feature if older than 6 months” or key end_date=* to let user’s know when the tag is might not be valid anymore and needs to be checked in order to confirm its validity. In this way, if feature is revised regularly, period of revegetation can be observed as well, and estimate how serious the consequences of deforestation are.

Deforestation happens also for the reason illegal timber harvesting. In such a case, there’s no intention to use land for anything, just to profit from the timber. In case that timber harvesting is on a large scale, this makes the soil prone to erosion, and therefore, it is hard for vegetation to recover if the soil is often eroded. Erosion is highly probable due to the heavy rains in the rainforest. Central Europe is less affected by this type of rains. Furthermore, soil contaminated due to mining activities becomes infertile. This is the reason for vegetation loss, and vegetation on these sites does not recover quickly. As mentioned in the talk page, I think this tag should be accompanied by the key fixme to point out uncertainty about duration of this land cover type i.e. landcover=barren, fixme=”Prone to changes. Revise feature if older than 6 months” or key end_date=* to let user’s know when the tag is might not be valid anymore and needs to be checked in order to confirm its validity. —Gorica7 (talk) 21:32, 25 April 2019 (UTC)

It is very hard to obtain on-site information (wild-life environment), and satellite imagery has high cloud coverage that affects availability of high-resolution imagery. This could imply that this areas won’t be ever mapped. We think that having at least general features is better than having no features. Also, regrowth is affected by erosion (please check my previous comment), so it might not happen so quick. It is explained more in detail in our reply on the talk page —Gorica7 (talk) 21:32, 25 April 2019 (UTC)

You are right. There is an error in the definition. Barren is not supposed to include only soil. This can be seen throughout description of the tag.
As you may notice in the previous comments, I stressed the effect of erosion on deforested land vegetation regrowth.I could not find a research exactly about re-vegetation period. However, I found this paper that is saying about soil loss and how it reduces soil fertility. The point here is that erosion can affect the period of regrowth depending on it’s severity, therefore the period of re-growth is not certain. As I mentioned in the talk page, I think this tag should be accompanied by the key fixme to point out uncertainty about duration of this land cover type i.e. landcover=barren, fixme=”Prone to changes. Revise feature if older than 6 months” or key end_date=* to let user’s know when the tag is might not be valid anymore and needs to be checked in order to confirm its validity.—Gorica7 (talk) 21:32, 25 April 2019 (UTC)

The aim of this mapping is also to identify what replaced the forest (i.e. agricultural areas, barren land (unused)...). We’re hoping in this way that the collected data will be useful for the analysis of causes and help in defining mitigation measures.—Gorica7 (talk) 21:32, 25 April 2019 (UTC)

How many times do you repeat your comments on a proposal that was rejected a year ago? And your suggestion isn't simple at all. When it becomes vegetated, there's vegetation *and* soil. Is it landcover=soil;vegetation then? What is "landcover" supposed to mean anyway? During my 10 years with OSM, nobody was ever able to give me a definition for that key. In my opinion, landcover can only be one of "atmosphere" (where land is) or "not applicable" (where no land is, i.e. oceans). --Fkv (talk) 04:56, 8 April 2020 (UTC)

Barren is indeed surface (land cover). Absence of vegetation is a way to describe barren land cover, but the land cover itself is present (not absent). To give an example, rock is natural non-vegetated surface. The lack of vegetation here does not mean that the rock surface is missing.—Gorica7 (talk) 21:32, 25 April 2019 (UTC)

But if there is some type of pollution and nothing will grow, we just have to wait and map like there is grass and we are not sure if it will be in future --LorenzoStucchi (talk) 15:42, 26 April 2019 (UTC)

After the first vote we found some misunderstood in the description so we improved it, also with some graphical example.

Note that users are not obligated to provide reasoning for vote and badgering them to provide one is a poor form. Especially in cases where there are many comments explaining what is wrong with the proposal Mateusz Konieczny (talk) 07:09, 27 April 2019 (UTC) misleading, see link below

Sorry but users have to provide a reason for the vote, they don't have to provide a suggestion. This quote is from the rule page "People should not just vote "oppose", they should give a reason for their proposal, and/or (preferably) suggestions." We want to improve our proposal and make it the best for all, so most different views we have better will be the proposal. --LorenzoStucchi (talk) 07:25, 27 April 2019 (UTC)

Thanks for this example, I check them also on OSM and the last two are not mapped, as you said the first should be a barren soil, but this is the only feature that is mapped on OSM and is mapped as natural=scree it's correct or should be more correct that this is barren land? --LorenzoStucchi (talk) 07:47, 27 April 2019 (UTC)

Scree is...not too wrong. It's a pumice deposit from an eruption of Mount Mazama, and has almost no vegetation because of how well water drains through it. Something like natural=pumice_deposit or the little-used natural=gravel would be more accurate, while landcover=barren would be more generic. --Carnildo (talk) 19:21, 27 April 2019 (UTC)

But since the tag that you proposed are not existing, should be better to describe it as landcover=barren that is generica but not wrong --LorenzoStucchi (talk) 07:37, 4 May 2019 (UTC)

This is the view in iD editor you can see some rare spot of grass inside the land, it's not a lake because there is water near and looks very different and you can suppose that is not farmland because is far from every building and have a strange and irregular shape. --LorenzoStucchi (talk) 07:47, 27 April 2019 (UTC)

Strange and irregular farmland is common around me, because fields are often bounded by the contours of slopes too steep to safely plow. I would have guessed it as a meadow, because I live in a fire ecology area and vegetation re-grows rapidly after a disturbance. --Carnildo (talk) 19:21, 27 April 2019 (UTC)

Yes but in the middle of the forest this can be a parameter to consider if the area is agricultural or not. --LorenzoStucchi (talk) 07:37, 4 May 2019 (UTC)

Yes can be enough good to show distinguish the type of bare land, but if just bare soil doesn't exist a tag for it, so this is general but describe this situation --LorenzoStucchi (talk) 07:37, 4 May 2019 (UTC)

The previous definition talks about "soil without vegetation" and we have to change it because was too general and don't describe what we want, are just a few words I think that the important part is the concept of land that is without vegetation and that doesn't grow. Yes but multipoligon is always complex to be mapped and can be misunderstood by other users if they saw it with different images if there is also a description of the inner area they can better understand the previous mapping. --LorenzoStucchi (talk) 07:37, 4 May 2019 (UTC)

Nothing in the tag to stop its use for an area in the process of cut trees. It is not a matter of the intention, but what is documented in the tag. If the documentation of the tag allows its used then it will get used that way. Warin61 (talk) 21:59, 10 May 2019 (UTC)