In this page is proposed to map ground in OSM. When mapping landcover in OSM, it may be possible sometimes to find groundy areas with few or any vegetation covering it.

In this page the term ground will be used as soil, as described in the linked Wikipedia page. With 'ground' in the OSM context, it is meant any soil area (not necessarily compacted) with few or no vegetation on it.

After the discussion with the community, it has been suggested to take inspiration from already existing classification schemas. Indeed the term soil can be used for many different purposes and in many different scientific / technical environments. Also, defining soil as ground with total absence of vegetation is misleading and usually a not so good classification practice.

As a final description of natural=bare_soil is then proposed: "Any groundy (meant as: silt or clay soil, as well as loam (mixed soil with clay/silt/sand) and mixed organic (including humus) and mineral soil), unconsolidated (not only rocks but also soil) bare (vegetation percentage less than 30%) area to be applied whenever the groundy area cannot be tagged with already existing tags, mainly due to the environmental or geological nature of that area (as, for example, natural=wetland + intermittent=yes)." Proposed images: 13 and 15 in Talk page 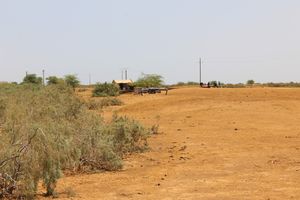 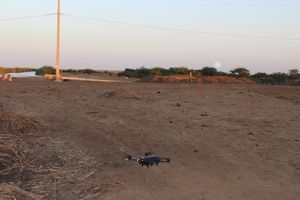 Mapping groundy areas in OSM is essential because of the following points:

At the time of the proposal, there is an inner duality in the mapping of the natural=* features in OSM:

Therefore it has been decided to start the proposal of the ground feature as:

but lists of possible keys and values for this tag are proposed as well in the Tagging section.

Many issues brought the creation of the proposal for the ground feature:

These examples are coming from landcover mapping by Unite_Maps_Initiative/UN_Mappers in Somalia. Several similar examples can be found in arid areas in Africa, as well as in the rest of the world. 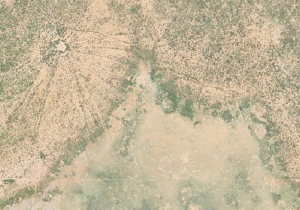 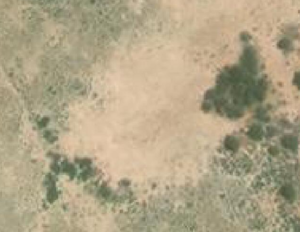 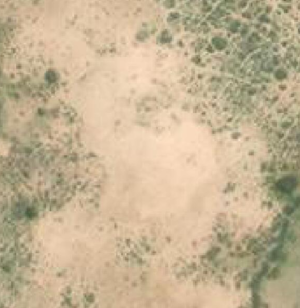 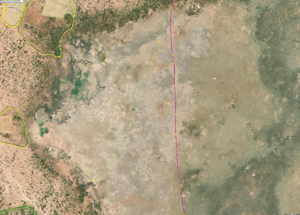 The scale is specified in the name of the files.

When someone could claim these areas are temporary, and they could be filled by vegetation in few months, this doesn't seem the reality on the ground by comparing images in different seasons and different years. Other causes of permanent bare soil are pollution of the ground and climate change.

The proposed tag is natural=bare_soil.

Further tagging possibilities (not considered in this feature proposal)

The feature applies to Areas and Relations. Doesn't apply on Nodes.

No specific rendering is proposed, but light brown is suggested

If the feature will be approved, the following pages must be changed:

It was rejected with 17 votes for, 13 votes against and 2 abstentions.

Did not meet 74% approval

The new pictures are still not very helpful, as mentioned on the Talk page. The two with drones look like construction areas or the edge of a road/path area. Please map some actual areas near where you live (or where you have traveled in person) and then present these examples with pictures from more than one angle. This would be very helpful. --Jeisenbe (talk) 21:23, 3 August 2020 (UTC)

I think 30% is too high. Many desert areas are going to have rather sparse bushes, cacti, shrubs or clumps of grass which are rather far apart, but 30% coverage is very significant, and quite different than 5% or 0% vegetation. My understanding is that natural=scrub and natural=heath are currently often used for arid regions with only 10% to 50% coverage by shrub canopy, and this proposed tag would then compete with those existing uses (as well as with natural=grassland). Consider that natural=sand and natural=scree are usually for areas that are almost non-vegetated. Coastal sand dunes that are covered with grass or buses are usually mapped with natural=grassland or natural=scrub (or heath), not natural=sand for the whole area. --Jeisenbe (talk) 21:23, 3 August 2020 (UTC)

Second, this voting is invalid because the proposal was changed after its start ([4]) significantly: replacing "without vegetation" by "without or few vegetation" in the short description, rewriting the short description, replacing "without" by "with", replacing "any" by "no", large rewrite of the tagging section and adding ground photos after a couple of people have voted).
In addition to the formal reasons which make the voting have no value, I agree the technical arguments of User:Imagico, User:Fkv and User:Mateusz Konieczny. The ground photos are poorly choosen to illustrate the proposal. In contrast, they will make mappers use this tag as a generic nothing-grows-here tag as User:Woodpeck warns because they show areas without vegetation due to either human use (or cattle) or areas where it is likely that the absence of vegetation has no natural reasons.
The definition of the proposed tag reads like a "use this if you don't find something better". That's a poor definition because it relies on other tags which do not exist at the moment. Or in other words: if one day a tag for toxic ground without vegetation is invented, the defintion of this tag silently changes. --Nakaner (talk) 13:20, 4 August 2020 (UTC)