A river is a natural flowing watercourse, usually freshwater, flowing towards an ocean, sea, lake or another river.

For every river a

way tagged as waterway=river (way 4 in image below), must be drawn in the direction of the river flow (i.e. from source to sea). Ideally this should be placed along the thalweg or the deepest points of the riverbed. The exact location of this can be difficult to determine, as usual it is acceptable to try your best to approximately place it along the right path.

Also tag this way with name=*, wikidata=*, and other tags as necessary.

Large, or sections of a river which are wide enough to "require" mapping of distinct areas of water can be mapped by an area. Example: River Thames as it flows through Central London.

For small rivers it is not necessary to draw an area for the water-covered area, but it might still be interesting, especially if it is irregular.

The area of the river should be marked by an

area drawn along the riverbanks. In practice, as wide rivers tend to be long, the river will be drawn as a series of adjacent areas (ways 1 & 3 in image above) or as a multipolygon.

These water areas should be tagged as natural=water + water=river.

N.B. Do not tag objects with both variants.

If the linear way is tagged with name=*, do not also tag the area with the same name, following the One feature, one OSM element principle.

If there are only a few islands, terminate the water area at the island and start a new one, excluding the island.

For more complex cases, a multipolygon relation should be used and the island and the main river bank included in the relation. The main riverbank way (way 1 in image above) will have the

Using one multipolygon relation for the whole river area

Another way to tag those large rivers using multipolygon relations would be to create only one relation for the whole river. This avoids the need to create arbitrary cuts along the river. However, longer rivers mapped with that approach cause problems for editors and data users. While single multipolygons for the entire river offers some advantages, it would result in massive relations, with ways that have thousands of nodes and may cause some problems for data consumers, they should not be used. Use multiple small multipolygons instead. (See discussion) 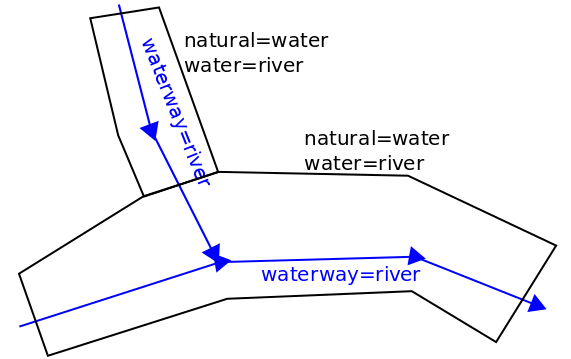 ways should always get the tag waterway=river. Also ensure they are connected. This could be important for boat routing or other river connection analysis.

River area: On this example, the lower river is the larger one. The two

areas and are tagged waterway=riverbank or natural=water+water=river. They have a shared section.

In general these rules can be followed more closely if we have better data (ideally someone living locally observing the river's position). When sketching from imagery, it is acceptable to just do our best based on what we can see (e.g., assume visible sandbanks get washed over as pictured below). Note that you should always be careful to avoid overriding valuable on-the-ground mapping with information sketched from imagery.

It is fairly common practice not to map non-permanent and quickly changing islands (sandbanks) in rivers. Vegetation cover on river islands can sometimes be used as an indicator for their permanency although it can also be misleading - there are many examples of vegetation free river islands that are stable for many years. When mapping from aerial or satellite imagery comparing images from different years can be very helpful.