A simple intersection is represented by the ways for the two roads sharing a common node. 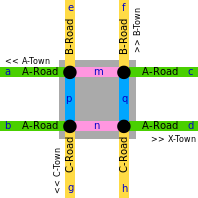 When all sections of a carriageway have the same attributes, they can be represented by a single OSM-way going through. Once attributes are different, such as having turn:lanes=* or destination=* mapped, they become split into individual OSM-ways.

Representing a road area by a linear OSM-way is an abstraction for routability. In analogy, the four nodes and the inner way sections of a dual carriageway junction are an abstraction from the real junction area (grey in the example images), also required for routing. This can however lead to problems for assigning the name=* tag. Obviously, the pink segments m and n in the pictures can be named as A-Road without a conflict. On the other hand, the blue segments p and q might be named either B-Road or C-Road, or given no name at all. Similarly, the destination=* should be tagged on the outer segments where things are unambiguous.

A ford (where automobiles, pedestrians, or horses enter the water to cross a stream or river) should be tagged as ford=*.

Rail/road level crossings should be tagged as railway=level_crossing.