From OpenStreetMap Wiki
Jump to navigation Jump to search
Tag:highway=street lamp - Other languages

The tag highway=street_lamp is used to map a street light, lamppost, street lamp, light standard, or lamp standard: a raised source of light above a road, which is turned on or lit at night.

Add a node at the point where the light source is actually positioned (i.e. next to the way lit).

The tag highway=street_lamp is used on

Consider also using lit=yes on the street or other feature that is illuminated by the street lamp. Unless the lamp is a spotlight or floodlight, it may be unclear exactly where along the street the light diminishes enough that the street would be considered unlit, but the lit=yes segment would at least extend as far as the series of street lamps along the street. lit_by_gaslight=yes is also used in some cities to indicate that a roadway is lit by gaslight specifically.

Note these attributes have not been voted on, but have been used

The suspending is commonly done by placing the lamp on top of a pole at the edge of a road or between lanes. Lamps may be mounted on the middle of a roadside power pole instead of a dedicated pole, although the latter may support low voltage power lines (power=minor_line) for electricity supply for the lamps. Another common scheme is to have the poles hold up a suspended carrying wire from which the lamp(s) hang.

In cities, the existing buildings sometimes replace the poles in either scheme. Occasionally, street lamps are attached to other structures of convenient height, such as bridges or road signs. 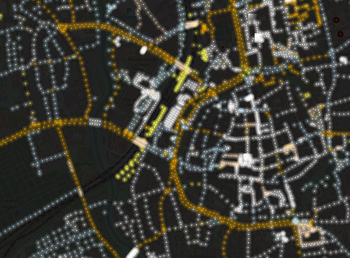 Street lighting in Göttingen differentiated by lamp type (sodium, CFL, LED and other)

Currently there is a project to map all gaslighted

streets and all gaslight

lanterns in the town of Düsseldorf. See: Düsseldorf/Projekte/Gaslaternen

(Many of these tags may also be applicable to electrical lamps, though no general scheme has been defined)