NOTE: This issue is now handled by using the list of OIS streetname fixes from https://oisfixes.iola.dk/

In case streetnames with wrong abbreviations are discovered, those should be added to the OIS fix database.

I have added a chapter on the expansion of abbreviated street names from DAR. Please review: https://wiki.openstreetmap.org/wiki/AutoAWS#Expanding_street_names

A lot of the changes in the list mentioned here are the result of a few mappers being (imho) a bit too eager "correcting" roads named after i.e. persons and I also think it would be better to let some traditional and still commonly used abbreviations stay. --Hjart (talk) 12:56, 3 May 2018 (UTC)

To-do: Other wiki pages that should be updated to include information about AutoAWS

As mentioned by Niels Elgaard Larsen and Ole Laursen on the talk-dk mailing list, it would be prefered, if manual corrections to AWS import were taken into account;

- Data from AWS is now compared with the OIS fixes database before loaded, so all street name fixes available there are considered.

For example, these import errors were addressed as part of the KMS import: 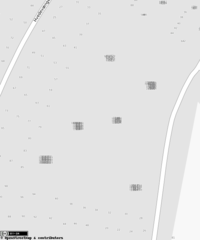 No. I used to stumple across them once in a while, but maybe those were the old KMS errors which were fixed in the later OSAK imports as mentioned above:

If we discover such issues in the data later I can add an option for combining those addresses to single nodes, but I would rather not do it until we are sure the issue exists since if would take a lot of work to create.
--TangoEast (talk) 18:44, 19 April 2018 (UTC)

It has been suggested to add the "Supplerende Bynavn" from DAR as a tag in OSM. On some existing addresses, this data has been added in an osak:subdivision=* tag.

I generally do not like the idea of adding a lot of data to tags we invent ourselves, that are not used in the rest of the world - for example the above mentioned. This is because the data is not very usable by most data consumers, since it is country specific. However, I think it makes a lot of sense to import data if there is a widely used OSM tag corresponding to the data being imported.

The following data, which is available in DAR, is not currently being imported:

Please discuss whether you think one or several of the above values should be imported. If so, please also suggest an appropriate tag for the corresponding data. For example, maybe it would be appropriate to import the name of the region (i.e. Region Midtjylland) as an addr:province=* tag.

At the same time, we might consider if we want to replace the osak:municipality_name=* tag with something more recognisable. For example addr:district=* or addr:municipality=*.

In a number of cases I've found osak:subdivision=* very useful for determining names of places as well as their extent. In many other cases I've been looking for it in vain, so I really support adding it. Replacing it with addr:place=* makes sense to me (experienced contributors will know that a lot of our wiki should be taken with a (large) grain of salt anyway).
I do not see an immediate need for importing any of the additional values listed. If there is, my first guess would be Sogn, which appears to be a slightly confusing entity though, apparently unique to Scandinavia.
Geocoders usually derive country and municipality etc. from the areas adresses and other features are found in, so to the extent that we can trust the areas defined in OSM (example:

Haderslev Kommune, we might consider dropping these too. Replacing osak:municipality_name=* with addr:municipality=* makes sense to me though. --Hjart (talk) 07:46, 3 May 2018 (UTC)

The code for version 0.3 is now available for review: https://pastebin.com/WGhk59sy

I call this version release candidate 1, since all the desired functions have now been implemented and the script has been tested against live data (see https://www.openstreetmap.org/user/autoAWS/history).

Anyone interested is welcome to review the code, as well as the changesets already created, and comment if there is anything they think needs to change.

I will continue testing on some larger postcodes in a few days. Before then, please comment if you have any concerns about the revised address tagging scheme (see https://www.openstreetmap.org/node/5599082321 as an example, and this wiki page). In particular, please consider the use of the addr:municipality=* and addr:place=* tags.

The source code for autoAWS 0.4 is now available for review here. Please see the autoAWS wiki page for a changelog.

This version of the code has been thoroughly tested in various smaller and larger postcode areas. You are welcome to look through the changesets and comment (on this wiki page) with any issues or anomalies that you might find, see autoAWS user history.

I've thought about removing the osak:revision=* tag from address nodes since autoAWS doesn't really need it. Is anyone aware of any data consumers that might want this tag to stay? Or does anyone want it to stay for other reasons? --TangoEast (talk) 18:57, 14 May 2018 (UTC)

The latest public source code is the one for 1.0. Would it please be possible to publish the code for 1.1?

This account is configured to receive payments as it is registered with osmand-live using Bitcoin address 18dSvQ2PQReMoM9rU4vbeAoZkSLDoT1BWG . There is more than one way to think about it. --Letstalkopen (21 August 2019)

Considering the (minuscule) amount of money made this way versus the value of the services done by this account, I personally cannot consider this a problem. --Hjart (talk) 09:34, 25 August 2019 (UTC)