From OpenStreetMap Wiki
< Talk:Tag:highway=steps
Jump to navigation Jump to search 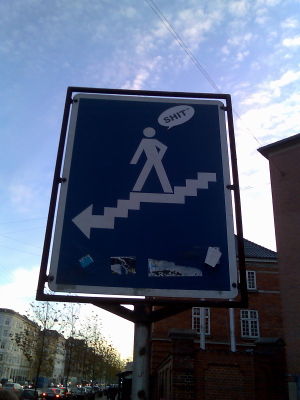 Copenhagen example of walking down steps

I agree that that would be logical but architects draw an arrow on staircases that points up. Malcolm Boura 21:10, 5 June 2008 (UTC)

I always put them uphill (and btw. I am an architect). It is internationally consensus to do it this way in technical drawings, and why should we put them contrarily? --Dieterdreist 15:43, 14 April 2009 (UTC)

Have anyone seen a good symbol to draw for this, I saw this -----> in Copenhage, is it good enough? The only way to help people undestand they have tagged it wrong would be to show a symbol that tells you wheter it's up or down. Erik Johansson 06:39, 29 August 2008 (UTC)

Perhaps add a direction=up, to the steps that are tagged with way pointing upwards and direction=down for ways pointing downwards, and for all others giving implied direction=none? Erik Johansson

I believe that in architectural drawings, steps are almost always marked with an arrow that points up the flight. Since I believe this is an established standard, we should probably orient steps in the up direction. Chriscf 13:40, 30 September 2008 (UTC)

For the time being, I'm using direction=up and direction=down to specify the direction I've drawn the steps. However, if architects have already made it a standard to draw steps upwards I think we shoud follow that standard too. --Jesper Cheetah 19:48, 10 April 2009 (UTC)

I think it's more logical if steps points upwards, because intuitively people associate steps with walking from bottom to the top. There are thousand ways to come down from something (sliding, jumping, rolling), but only one way to go up to something (steps). Therefore we should orientate us by the way how archticts do it. This way fits better than the way drawing it like rivers, because steps are designed by architects. S.A.L. 12:57, 23 November 2008 (UTC)

I think this can still be changed even without an extra tag. It will take some time to control and adjust all steps already in the db, but it is possible (and wrong ones don't create much harm). I would do it according to international standards (from down to up). --Dieterdreist 15:43, 14 April 2009 (UTC)

I'm going to go with the direction of the way points 'uphill'. And presuming that this is the way that we have all been tagging steps for ages and that this is just an out of date wiki page, I'm going to boldly change it to support way direction is up-stairs in the next week or so. Rw 05:11, 21 February 2011 (UTC)

I, on the other hand, assume that those who consciously think about the issue tag the results of their thought process explicitly (using incline=up/down), and the rest just use random directions. --Tordanik 16:40, 21 February 2011 (UTC)

In the 3 years since this discussion started, incline=up/down has been added to 10% of steps already. Explicitly tagging the direction helps making sure that people consciously map directions. With implicit directions, you would assign a meaning to steps drawn by people unaware of the convention, as well as those drawn before the convention was established, that simply isn't there. Implicit directions also don't allow for mapping (or importing) steps whose directions you don't know. --Tordanik 09:50, 27 February 2015 (UTC)

If there are flat lines along the stairs to allow persons to push a stroller along, I think we could use stroller=yes. --Lulu-Ann 15:03, 10 September 2008 (UTC)

A ramp can be used by a wheelchair, but a stroller ramp (steps in the middle) are too risky for a wheelchair. Also stroller ramps can be steeper and longer. There is a big difference between stroller=yes and wheelchair=yes. --Lulu-Ann 16:06, 24 September 2008 (UTC)

surface instead of highway

In fact, I don't understand why there is a highway=steps tag anyway. IMO a surface=steps would be sufficient, like all the proposed tags on this page. Using a special kind of way for a stepped segment does not make much sense, the steps are often part of another way with it's own set of tags and usability. Routing software might look at the surface tag like on the barrier tag, deciding which sort of 'vehicle' can use the way. --tmeller 9:06, 4 October 2008 (UTC)

If you take it to the extreme, then you could argue that the steps are just large bumps in the surface of a footpath - but that's not how most people would see it. I personally think there's nothing wrong with tagging steps in their own right. They may form part of a longer logical route, but they aren't really the same sort of thing as any old footpath. Richard B 22:30, 5 November 2008 (UTC)

IMO you are right. But there are so many types of steps, you cannot compare them. Lastly I mapped a town in Switzerland, found a way: 6 metres wide, paved, surfaced with steps. Each step was 2 metres long. Makes it complicated but not impassable for a handicapped, doesn't make any difference for a mountainbiker, can even be used slope-down by a lorry. There are other steps - not far apart - in the mountains on a hikingpath. Not usable by even a mountainbiker. The waytype marks their usability. --tmeller 19:16, 23 January 2009 (UTC)

Show me a single step over 8 cm height that can be passed with an ordinary electrical wheelchair. Steps are always impassable. --Lulu-Ann 14:33, 26 January 2009 (UTC)

If a step lower than 8cm is still a step, and steps lower than 8cm are passable, then steps are not always impassable. But the question isn't whether or not highway=steps implies wheelchair=no, it's whether highway=steps is useful at all. tmeller was pointing out that just highway=steps is so broad a category that it doesn't give useful information, and is just a feature of some other route.--Hawke 16:44, 26 January 2009 (UTC)

i see steps as a trait of a way, not a category of a way. similar like highway=unsurfaced is considered obsolete and should not be used, steps do not define what kind of a way it is, they identify a trait for the way (or some section of the way). actual way might be highway=pedestrian, highway=footway or something else. it would seem logical to me that steps would be marked in addition to the appropriate highway value, not instead of it. --Richlv 18:56, 1 May 2009 (UTC)

I totally agree with you. steps should be seen as a feature (with subfeatures like handrail or strollers) of a given highway type. you can't compare steps on a hiking path with steps in a pedestrian area. but that's what you do with highway=steps: they are equalized. and trying to mark the differences with step features like width or step condition just will not do the trick and requires much more work and tags. sure, steps features are nifty, but by using the right highway type as basis you imply a certain set of default features. And in the end that's what's always done with the highway tag. so why break it here... --Marc 15:26, 21 December 2009 (UTC)

Agree with OP. I'm trying to tag up access rights on the rights of way in my area and I can't marked a stepped section of a public footpath as access:foot=designated because, as I understand it, highway=steps implies that access=no (excuse me if I've got the terminology wrong, I'm a newbie). DaveD 21:48, 15 October 2018 (UTC)

You can add foot=designated to highway=steps. Is it enough to solve the problem? Mateusz Konieczny (talk) 11:06, 18 October 2018 (UTC)

With a line, the steps can only be perpendicular to the direction (up/downstairs), but how does the renderer know how to draw the steps (they can be up/downstairs but also "left/rightstairs")? I don't oppose the idea (I myself have found flights of steps much wider that long) but I'm curious. --Guillembb (talk) 14:44, 1 June 2014 (UTC)

There is still no solution for the up/down problem. I think it is safe to assume that defining a direction-dependent meaning is practically impossible now, with 40.000 uses of the tag in Europe alone. I therefore suggest to use an additional tag to express up/down information.

This is easy where the steepness is known: if the steps' incline is 30%, for example, we can add incline=30%, which indicates that the steps go up in way direction (it would be incline=-30% otherwise). I'm not sure what to do where we don't have this information, however. Of course, we could use something like incline=up and incline=down to roughly express up/down information. Opinions? --Tordanik 11:28, 23 February 2009 (UTC)

I started by tagging all mine with the arrow pointing up before finding this page, as it seemed logical. I think I was probably subconsciously aware of the architects standard as the same was used in roleplaying game maps for games I used to play decades ago. More recently I've not been so consistent in mapping steps, but could use ITOmapper (or whatever it is called) to find all the ones I've added and make them consistent. Most of those that will be different will be the steps down to the beach where they start at the path and just end at the beach. --EdLoach 10:33, 23 March 2009 (UTC)

In my humble opinion,
* in openPisteMap the pistes are dawn from up to down when aerialway are drawn from down to up ( see http://www.openstreetmap.org/edit?lat=46.1746&lon=6.7086&zoom=14)
* waterways (rivers are drawn from up to down
* and maybe other stuff...
openStreetMap is a map, and not an architectural plan, so the natural way should be up to down.
FrViPofm 11:41, 26 March 2009 (UTC)

It's no problem to have implicit up/down information for objects that have "natural" directions. I suggest, however, that you explicitly document that. If we decided to use incline=up and incline=down, for example, you could say that a piste implies incline=down, thus matching the convention of drawing them "up to down".
Steps, however, don't have a natural direction in my opinion, so they should not imply a direction (probably 50% of the tens of thousands of existing steps would be wrong if we decided on one). --Tordanik 11:53, 26 March 2009 (UTC)

In Michelin's french maps, sloping roads have arrows indicating sloap importance, from down to up. We could apply this concept on steps... It seems natural to me (but perhaps not for you). Wagner51 13:38, 18 April 2009 (UTC)

The direction of the way should be pointing up the stairs. Only reason I can think of to not do this is if there were one-way steps. Anybody know of such a thing. RussNelson 21:04, 13 June 2009 (UTC)

Should I map as steps mountain trail paved like this: 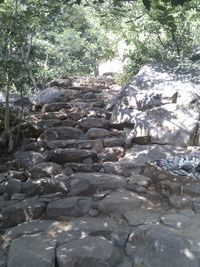 As someone who has constructed such steps on a mountain trail, they absolutely count as stairs, complete with standard tolerances for height, width, depth and slope of each step (albeit a little looser than your typical concrete steps due to variance in the material and the traffic being less general). The proper way to tag this would indeed be with highway:steps, and I would think also material: or building:material: or surface:stone. Arlo James Barnes (talk) 02:17, 23 September 2017 (UTC)

This might be a good use case for the (rarely used) step.condition=rough tag... (Proposed_features/Steps_features#Step_condition) --Tordanik 16:40, 28 September 2017 (UTC)

For me it is clearly case of steps - recognized as steps, with the same implications for routing, rendering and other data use Mateusz Konieczny (talk) 15:51, 8 November 2017 (UTC)

There seems to be two different tags using stairs and steps being proposed as an area. i have seen stairs already being implemented. Are either of these currently acceptable?--Masaki123(talk) 19 January 2018

As I understand https://wiki.openstreetmap.org/wiki/Simple_Indoor_Tagging proposal duplicates existing tags (so indoor stairs would have tag separate from outdoor steps). Note Any tags you like. Mateusz Konieczny (talk) 13:48, 19 January 2018 (UTC)

Steps made of tires

Also note steps made of tires... yes, the surface is still dirt, but filling in a rubber tire, placed one after another up a hillside. Mention how to tag. Jidanni (talk) 00:05, 8 October 2019 (UTC)

Resolved: If there is an image on an open license (for example any image from Wikimedia Commons) it can be also added to examples Mateusz Konieczny (talk) 06:07, 22 September 2020 (UTC) 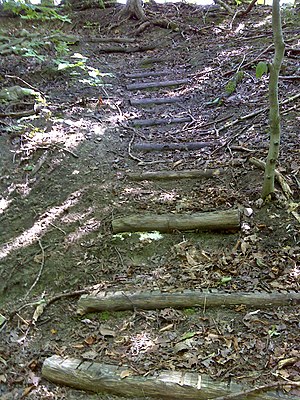