Sometimes a road does not have a name (in the real world). That's fairly rare, but it sometimes happens. In this case, enter the highway tag, but not the name tag.

Often a road has a name, but you don't know what it is. This might be because you didn't write it down while you were out surveying. Maybe you used a camera but the picture came out blurry. Or maybe you are sketching over Yahoo! Imagery. These kinds of roads should be drawn in as ways tagged with highway=road as per the guidelines on Yahoo! Aerial Imagery#How to sketch? ... however not everyone follows this, and "sketched" roads are often left untagged or given some other highway tag by a reasonable guess.

If traffic can only travel down a road oneway then it is important to draw the way in the direction of travel and then add a oneway=yes.

A divided highway (also separated highway) is any highway where traffic flows are physically separated by a barrier (e.g., grass, concrete, steel), which prevents movements between said flows. While divided highways typically consist of two opposing traffic flows, such as with dual carriageways, they can also consist of three or more divided sections having a combination of same-direction and opposing flows, such as highways with "local" and "express" lanes (whereby entries to and exits from the highway are possible only from the former).

Divided highways should be drawn as separate ways. The ways will typically be oneway, and should be tagged as such where appropriate. Ways connecting the divided ways should be drawn at locations where movements between the divided ways are possible, that is, where the physical separation is interrupted. Where the divided ways are parallel (often, but not always) their nodes should be positioned so that they are adjacent to each other. This creates a more pleasing aesthetic effect in renderers, especially on curves. It also preserves the information on their mutual separation distance along their whole length. As with any ways, the spacing between is governed by the need to accurately represent curves (see below) 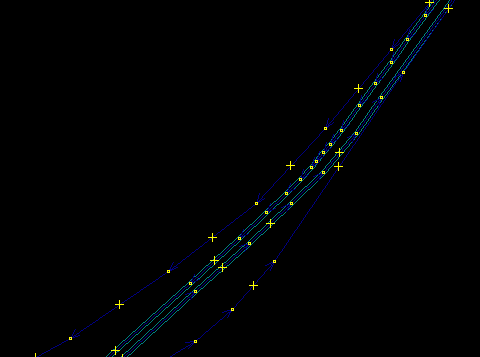 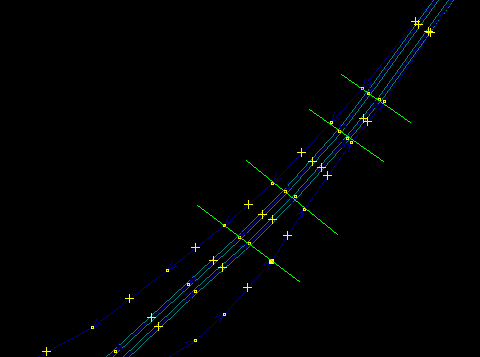 Roundabouts are discussed in detail on Roundabouts.

Often the bridge will not connect directly to a junction, in which case you should add a piece of road connecting the two (see image).

On some occasions the feature you wish to tag is not represented by a line (as is the case of a road, river, rail line etc), but by an area. For instance a wooded area, a park, or a lake are all map features which are areas. Create a new closed way which represents the outline of the required area. Annotate this way with the required tagging from the map features page, such as natural=water (for a lake), landuse=forest (for a forest), or leisure=park (for a park), etc. There is no consensus yet on how to draw areas adjacent to ways. They may be drawn either by leaving a small gap between the area and the way or by sharing the boundary.

TODO: Merge text this onto the Accuracy page

Accuracy is important. The GPS system provides fixes that can be accurate to 1-10 m which is more than good enough for this project. Do bear in mind, however, that a road can be several metres wide and a GPS fix could have been made anywhere in the road or even on the pavement. For many purposes accuracy to a few metres is plenty good enough. What is equally important however is topological accuracy. Do two roads intersect at the same point (a crossroads) or is the intersection offset? This detail may only be a matter of a few metres, but can be the difference between driving instructions that might say at the crossroads go straight ahead or at the junction turn left and then after 10 metres, turn right.

When tracing roads — particularly winding, rural ones — you should add enough points to make each curve look like a curve. Of course, this is entirely subjective, as curves made entirely of lines will only ever approximate a "true" curve (which has an infinite number of nodes), and will always look like a series of lines when zoomed in past a certain point no matter how many nodes there are. Any "rule of thumb" as to node spacing and quantity would be arbitrary and capricious. To generalize, though, sharp curves (those having a small radius) require many, closely-spaced nodes, while broad, long-radius curves can consist of fewer nodes having more distance between them. Without a hard-and-fast rule, it is best said to simply use good judgement and strive to seek a balance: on one hand, remember that you are drawing a map, not just a routing diagram; on the other hand, don't try to seek perfection by adding more and more nodes past the point of diminishing returns, keeping in mind that each additional node requires that more data be stored and transferred.

Note: Keep in mind that the road in the diagram below is about 2 km long. For very short roads you do not need to add that many nodes.

How not to do it 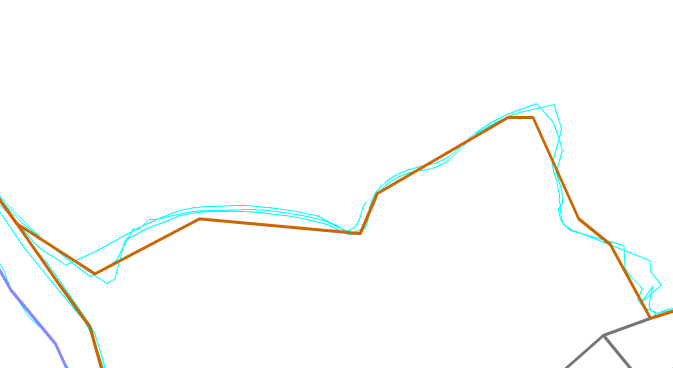 The above is an example of a very roughly-traced rural 2-kilometer road. Drawing roads like this isn't helpful. When someone comes along to do it properly, he will have to work hard to refine this way by adding lots of points into it and adjust them.

This is the same 2-kilometer road - but this will look much better on the map, and gives the map user a better sense of the curves of the road.

Before deleting a whole road, check that the nodes don't themselves have tags. Potlatch will alert you if they do (it also highlights tagged nodes in black).

You can see the road here. Other mapping services have a similar degree of accuracy.