Objects (usually streets) which have no name:

Divided highways should be drawn as separate ways. The ways will typically be oneway=yes, and should be tagged as such where appropriate. Ways connecting the divided ways should be drawn at locations where movements between the divided ways are possible, that is, where the physical separation is interrupted (e.g. [1]; as always, add access tags for legal limitations). Where the divided ways are parallel (often, but not always) their nodes should be positioned so that they are adjacent to each other. This creates a more pleasing aesthetic effect in renderers, especially on curves. It also preserves the information on their mutual separation distance along their whole length.

As with any ways, the spacing between is governed by the need to accurately represent curves (see below):

All road junctions should be drawn as a node which connects the ways (both or several ways share the same(!) node).

It is incorrect to use two nodes are just on the same (or nearly the same) position but actually are not the same. While this might look right, it will not define a valid routable connection from one road to the other.

If your editor's map style does not make shared nodes discernable, then a usual trick is to just move the node in question a bit and watch which ways move too. Please be sure to "undo" (with your editor's "undo" function, not by moving back(!)) this test move.

Some quality assurance tools help to discover such potential connection problems (way end closely to another way but not connected).

Often the bridge will not connect directly to a junction. In which case you should add a piece of road connecting the two (see image):

On some occasions the feature you wish to tag is not represented by a line (as is the case of a road, river, rail line etc), but by an area. For instance a wooded area, a park, or a lake are all Map features which are areas. Create a new closed way which represents the outline of the required area. Annotate this way with the required tagging from the map features page, such as natural=water (for a lake), landuse=forest (for a forest), or leisure=park (for a park), etc.

Most ways are assumed to be areas if they are closed (i.e.--if the way connects back to itself). However, there are some exceptions to this, such as highways, which are generally assumed to be ways. If the highway is meant to be an area (for example, a pedestrian square), then an area=yes tag should also be added, to imply that this feature is not just representing the way that forms the border, but the area within it, too.

There is not clear consensus yet on how to draw areas adjacent to ways. They may be drawn either by leaving a small gap between the area and the way or by connecting them so that the area shares nodes with the way. That being said, when the way is a highway, it usually is most accurate to include a gap, so that the area ends by the side of the road and does not share nodes with the road's way. This is because highway ways usually are traced along the centerline of the road, and it is unlikely that the area being tagged actually extends to the center of the road.

Accuracy is important during mapping. Beware of systematic errors of aerial imagery (see for example Bing#Precision). Remember, that when tracing roads — particularly winding, rural ones — you should add enough points to make each curve look like a curve. Of course, this is entirely subjective, as curves made entirely of lines will only ever approximate a "true" curve (which has an infinite number of nodes), and will always look like a series of lines when zoomed in past a certain point no matter how many nodes there are.

To generalize, though, sharp curves (those having a small radius) require many, closely-spaced nodes, while broad, long-radius curves can consist of fewer nodes having more distance between them. Without a hard-and-fast rule, it is best said to simply use good judgement and strive to seek a balance.

Below there is an example of a very roughly-traced rural 2-kilometer road. It's rather crude, particularly on the sharp curves. We would normally expect mappers to represent this kind of road with more nodes than that. 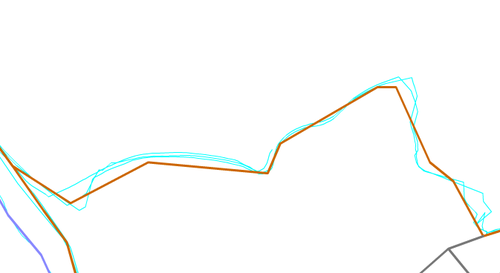 How it shouldn't be done

This is the same 2-kilometer road - but this will look much better on the map, and gives the map user a better sense of the curves of the road. You can see the road on the map. You can see, that ... other mapping services] have a similar degree of accuracy.

Note: Keep in mind that the road in the diagram below is about 2 km long. For very short roads you do not need to add that many nodes. If a road is perfectly straight then a node at either end is always sufficient, regardless of how long it is.

It's easy enough to "fix" these things i.e. enhance the detail of the road. Normally you should just add more nodes to the existing way. If you choose to delete and redraw a whole road, check that the nodes don't themselves have tags e.g. a highway=crossing node. Potlatch and JOSM] will highlight tagged nodes.