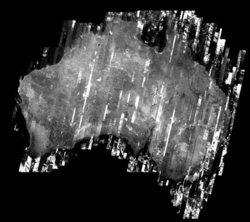 The Australian Geographic Reference Image (AGRI) is a aerial imagery dataset for the whole of Australia in grayscale, which is now available for mapping!

browse the imagery at agri.openstreetmap.org

It will be added to Potlatch imagery defaults soon

The imagery is of most use outside of major urban areas where accurately aligned higher resolution imagery is not available.

Some familiarity with the area is usually required to identify the features, but once identified major geographical features (such as rivers and main roads) are easy to locate and trace.

In some areas (for example in country Victoria) hires Bing imagery is available, but it poorly aligned, being about 10-20m from true. The bing imagery can be aligned to the AGRI imagery and then used for mapping the surrounding area.

It may be useful to compare with the patchy bing coverage to find areas which benefit most from this new imagery.

The imagery can also be a nice background for mapping GPS traces. The greyscale provides a good contrast with the the GPS points while still providing sufficient detail to allow outlying GPS points to be identified and eliminated.