It is the capital city of Turkmenistan. Ashgabat, though a city, enjoys the status of a province (welaýat) and is not administratively part of Ahal Province, which surrounds it.

Since Turkmenistan is undergoing constant redevelopment of urban areas and expansion of its national road network, choice of imagery is important. In general OSM's Bing imagery is to be avoided if newer alternatives are available, particularly when mapping Ashgabat. Mappers should also use available Mapillary and OpenStreetCam ground-level imagery, which local mappers have been collecting since 2016. 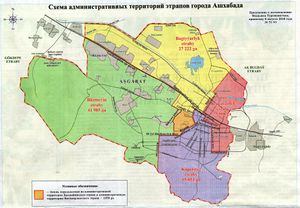 Map depicting revised borough boundaries of the city of Ashgabat, Turkmenistan, as of 6 August 2018. 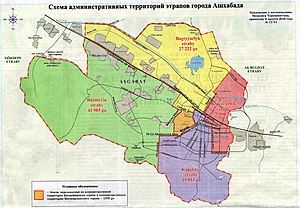 Map depicting the boroughs of the city of Ashgabat, Turkmenistan, and their respective borders as of 6 January 2018.

This is a reduction from the previous number of boroughs. Arçabil and Çandybil boroughs were merged on February 4, 2015, and that etrap, named Arçabil, was in turn renamed Büzmeýin in January 2018. At that time the Abadan borough of Ashgabat, created in 2013 by annexing the town of Abadan and surrounding villages to Abadan's south, was abolished and its territory was merged into the newly renamed Büzmeýin borough. The former Ruhabat borough was abolished at the same time and its territory absorbed by Bagtyýarlyk borough. In August 2018, 1,376 hectares of Büzmeýin borough were transferred to Bagtyýarlyk borough.[1]

Each borough is headed by a presidentially appointed häkim (mayor).

Please refer to the links in the section "Laws and Decrees Related to the City of Ashgabat", below, for the chronology and further details.

Certain of these are further subdivided, such as Parahat 3/1 and 3/2. Buildings are uniquely numbered within these subdivisions.

In 2019 the Turkmen government revealed plans to construct a massive residential and business zone north of downtown Ashgabat, to be called "Ashgabat City" (Turkmen: Aşgabat-Siti). The project is to cover 744 hectares and to include "over 200 buildings, 180 of which will be residential buildings of 12 to 35 stories. The district, where four secondary schools and the same number of kindergartens will be, is designed to house over 107 thousand people" in 17,836 apartments.[6][7][8] 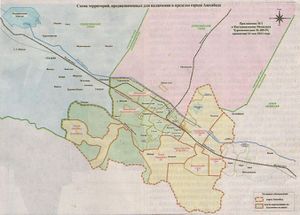 Historical map showing new boundaries of Ashgabat as of 27 May 2013, following annexation of Ruhabat District and town of Abadan, previously part of Ahal Province. Abadan (today's Büzmeýin) lost its status as a town and all villages in Ruhabat District lost their status as well, becoming neighborhoods of Ashgabat.

Within the Ashgabat city limits are found inhabited areas previously classified as cities, towns, villages, and dacha communities, but which since 2010 have been annexed and incorporated into the municipality of Ashgabat. These are best described today as neighborhoods, for they feature no autonomous administrative structures, despite continued reference to them in the vernacular as "villages". The Ashgabat mayor's office refers to them formally as "residential complexes" (Turkmen: ýaşaýyş toplumy, Russian: жилой комплекс). Each is subordinate to and dependent upon one of the four Ashgabat boroughs described above. 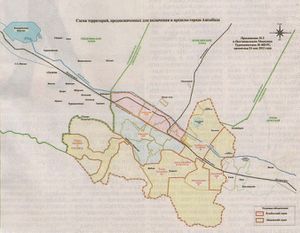 Second historical map, also dated 27 May 2013, depicting the then-new boundaries of the city of Ashgabat following annexation of territory previously in Ahal Province. 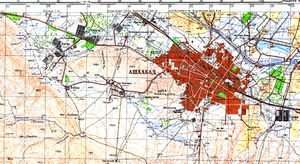 Several parts of the city consist of brownfield urban renewal projects, which have involved demolition of existing traditional single-family housing and construction of white-marble clad high-rise apartment buildings. They are designated as "lines" (Turkmen: nobatdaky, Russian: очередь), and include:

Other existent neighborhoods of Ashgabat known by convention but without formal administrative recognition include (coordinates provided below are approximately centered in these neighborhoods):

Not all locations of bank branches or ATMs have been mapped in Ashgabat. As of August 2018 two new bank headquarters buildings are under construction between Çandybil şaýoly and Maslahat köçesi and they will need to be geolocated and mapped.

Ashgabat as of July 2018 featured 16 health clinics and had plans to construct five more in the near future.[13] Not all clinics or their branches are yet mapped. All hospitals in existence as of August 2018 were mapped as of that date. A new International Burn Center built by GAP Inşaat on the southwest corner of the intersection of Görogly and Bekrewe was opened October 10, 2020.[14]

A list of Ashgabat's hospitals in the Turkmen language as of 2016 can found here.

A new building is to be constructed for the Research Institute for Seismically Resistant Construction in Bekrewe, near the Technology Center. Floor space is projected at 12,000 square meters in a four-story building. The building is to include a museum devoted to the history of the institute and of the 1948 earthquake. Construction is expected to be completed by September 2021.[18]