It is the capital city of Ahal welaýat (province) of Turkmenistan.

Notes on the city of Anew

Points of interest in Anew include the White Wheat Museum and the ruins of the Annau Medieval Settlement. 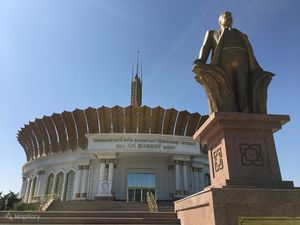 White Wheat Museum in Anew, with a statue of President Saparmyrat Niyazov

Anew was previously known as Annau (Аннау) in Turkmen and Russian, and that name is still commonly used in colloquial speech. The official name, as attested in signage and official documents, is however Änew in Turkmen, which is rendered in English without diacritical marks as Anew.

Anew, as a welaýat capital, is categorized by the government of Turkmenistan as a city "(şäher, город) with status of ... a district (etrap, район). Law stipulates such cities must have population over 30,000 and be the administrative center of a province (welaýat); headed by a presidentially appointed häkim." Accordingly, Anew should be tagged place=city and admin_level=8. See Turkmenistan: Administrative Subdivisions for additional detail.