Turkmenabat (Turkmen: Türkmenabat, Russian: Туркменабат) is the capital of Lebap Province (Lebap Welaýaty) of Turkmenistan. It features an international airport and both a rail and motorway bridge across the Amu Darya, linking it to the Turkmen town Farap and beyond, to Uzbekistan.

Notes on the city of Turkmenabat 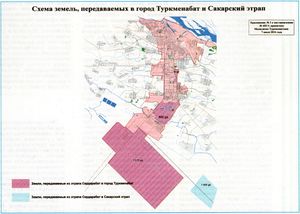 Map published in the official gazette of Turkmenistan in July 2016 depicting new territories added to the city of Turkmenabat. The large rectangle at the southern end of the city is the location of the new international airport inaugurated in February 2018. 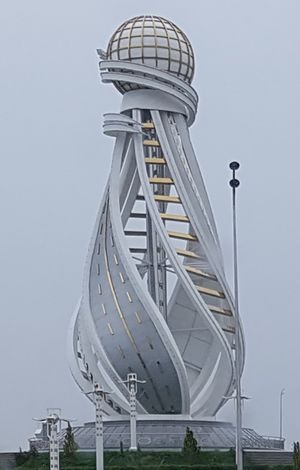 Turkmenabat ("City of the Turkmen") was known until Turkmenistan's independence as Çärjew, a variant Turkmen spelling of the ancient name Charjou (چهارجوی Chharjvy), which in Persian means "four canals". In antiquity the city was known as Amul (Russian: Амуль).

Turkmenabat International Airport's terminal is in the Guinness Book of World Records for having the largest star-shaped roof in the world.

Turkmenabat, as a welaýat capital, is categorized by the government of Turkmenistan as a city "(şäher, город) with status of ... a district (etrap, район). Law stipulates such cities must have population over 30,000 and be the administrative center of a province (welaýat); headed by a presidentially appointed häkim." Accordingly, Turkmenabat should be tagged place=city and admin_level=8. See Turkmenistan#Administrative_Subdivisions for additional detail.