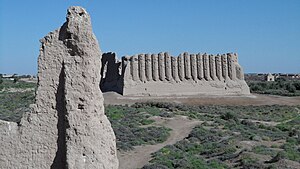 The capital of Mary Province is Mary. Mary Province's major industries include natural gas extraction, cotton production, and textile production. The province is a major crossroads, and features land routes southward into Iran and Afghanistan by road and rail, as well as northward in the direction of Uzbekistan via Lebap Province, plus an international airport in the provincial capital.

The Galkynysh (previously known as Yoloten) gas field in Mary Province is assessed to be the second-largest gas field in the world. Numerous gas pipelines emanate from the Galkynysh gas field, and their rights-of-way should not be confused with roads.

Important urban areas in Mary Province include the capital city of Mary, as well as Bayramaly, Yoloten, and the border city Serhetabat (formerly and in the vernacular still often called Kushka).

The Murghab River oasis is considered the most fertile agricultural area of Turkmenistan, and is where the Russian Empire began cotton cultivation following conquest of the Ahal and Mary Teke tribes in 1881. Irrigated cotton cultivation continues to this day. This border area was the point of contact between Russian and British military forces in the "Great Game" of the 19th century. The rail line built by the Russians in the 1880s terminated a few kilometers south of Kushka.

Tourist attractions include the Bronze Age city of Margush, which is estimated to have existed 3,500 years ago. The more recent ruins of the city of Merv, sacked by Tolui, a son of Genghiz Khan, in A.D. 1221, are all that is left of what at its peak was the largest city in the world. The ruins include the fortress of Uly Gyz Gala, and are located north of the city of Bayramaly.

As of January 1, 2017, the province includes 8 cities (города or şäherler), 14 towns (посёлки or şäherçeler), 143 rural or village councils (сельские советы or geňeşlikler), and 329 villages (села, сельские населенные пункты or obalar).[1] A parliamentary decree of July 24, 2016, abolished Altyn Sähra District, eight years after it was created.[2][3] Five cities enjoy legal status equivalent to that of a district:

You can help! Вы можете помочь!